No hurry Sunday morning... plenty of time for breakfast (free!) at our hotel and lazing around before we headed up the highway to Ephrata.  We're so used to living surrounded by hills and mountains that I'm always amazed at the hugeness of the sky when we get somewhere flat.  Ephrata is just before those hills in the distance, and that's Grandpa and Grandma Grasshopper in the silver Dodge pickup ahead of us :D 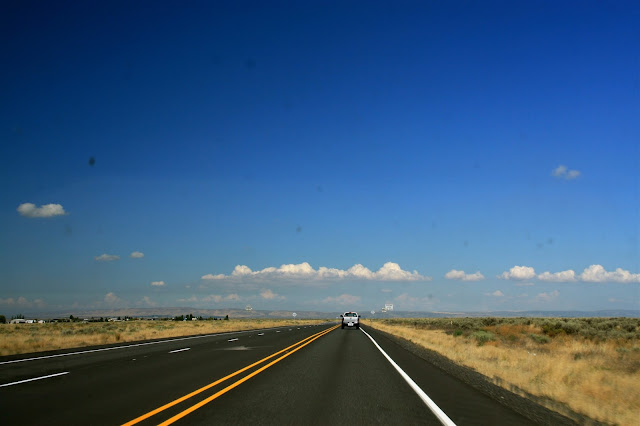 In fact, we're so used to seeing mountains that when I saw this cloud out of the corner of my eye, I thought it was a snowy mountain peak! 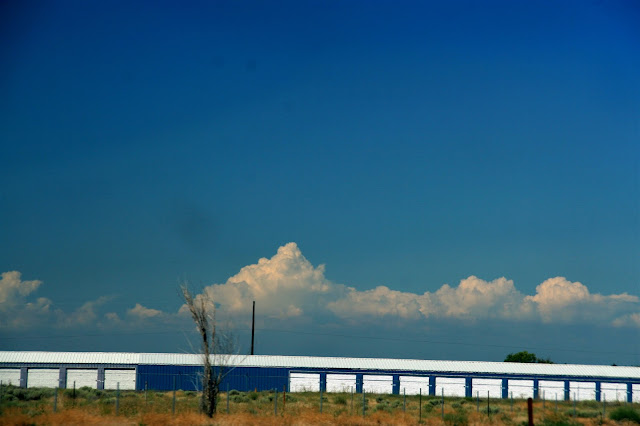 Our first view of the Ephrata airport, where Wyatt spent his week and a half.  I like the old buildings :D  It started out as an "Army Air Base" (before there was an Air Force) and was later transfered to the Air Force, who used it as a B-17 (Flying Fortress) training base, which - I would guess - means looooong runways (so nice for student pilots!) 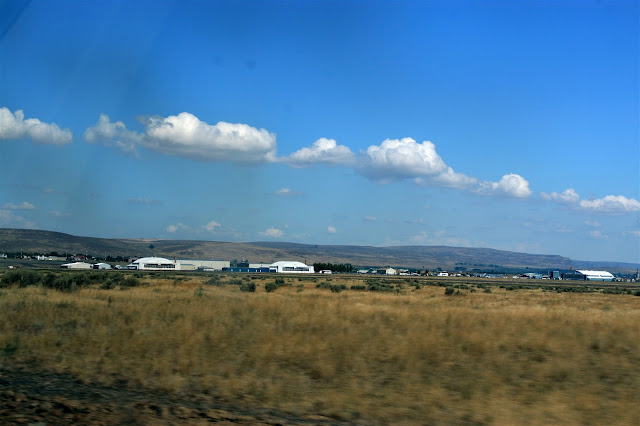 Ah, the brothers are reunited, and Wyatt shows off his "war wound".

Be still my heart, the thought processes of a teenage boy are not for the faint-hearted.  One afternoon they took all the cadets to a local pool to cool off.  So Wyatt, on the day before he was supposed to solo, decided to attempt a back flip off the diving board.  He jumped up but neglected to jump back (oops!) but was able to fend himself off the diving board, scraping up his left forearm, elbow, shoulder, and side in the process.  Genius. 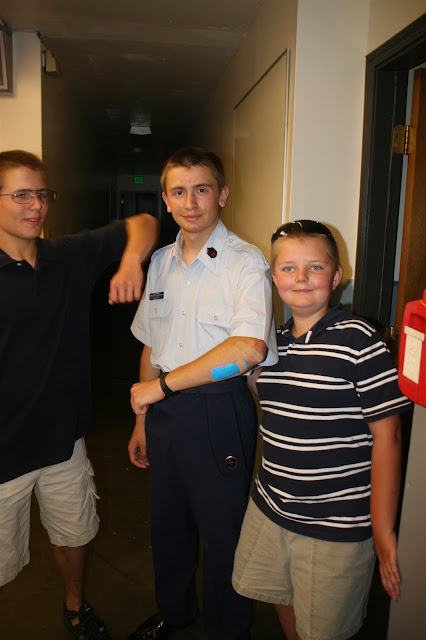 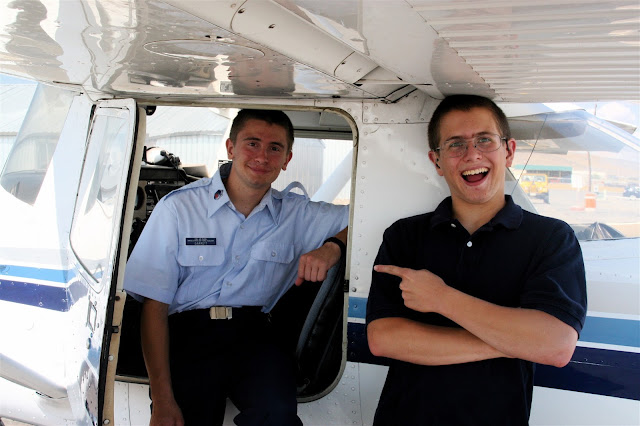 Tate was thrilled with the PBY (WWII amphibious aircraft). 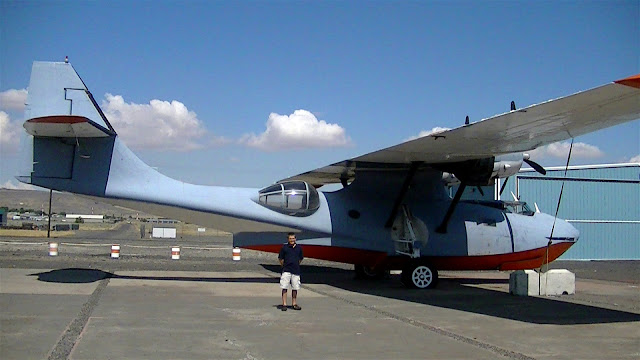 Mostly, they were just glad to be back together :D 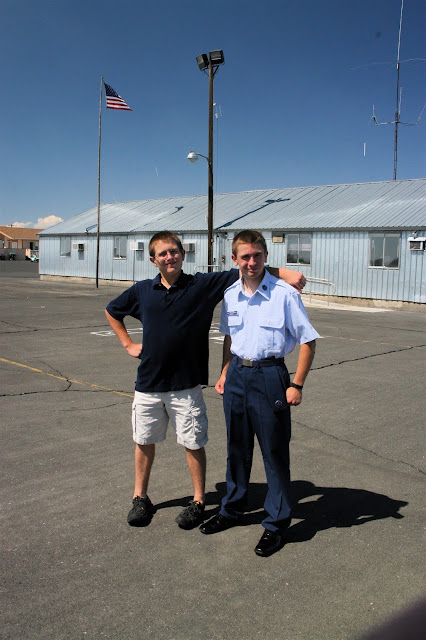 The big event, of course, was the graduation ceremony, held inside where it's not 95F.  Wyatt is looking at the camera.  The boy to the left of him, and the boy two rows back (with the cute ears) are both from our squadron also. 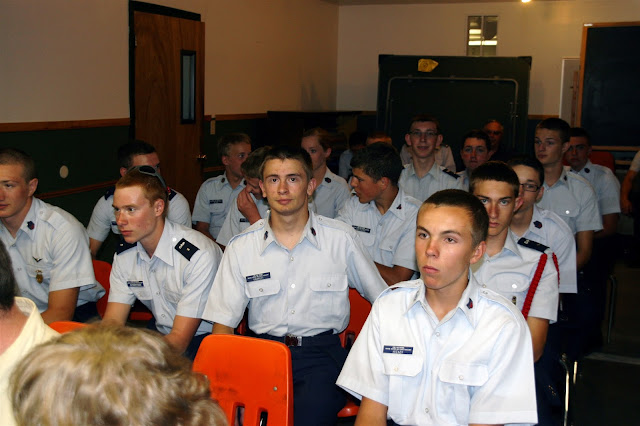 Wyatt really enjoyed his flight instructor, and described him as "a real piece of work". 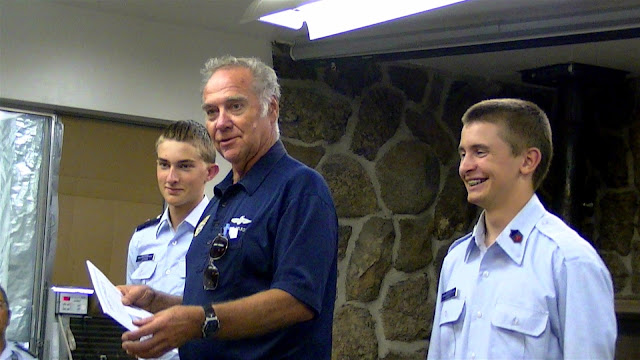 And the flight instructor had good things (and stories!) to say about Wyatt.  I think I already mentioned that he praised Wyatt as being the most consistent student. 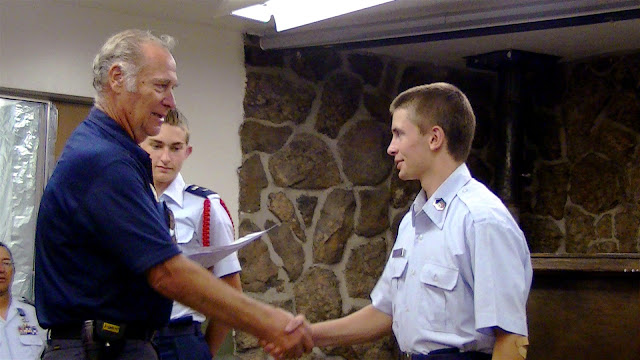 And... all the student pilots :D 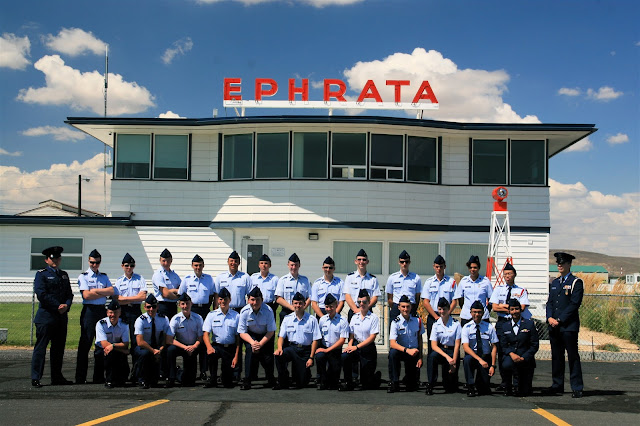 What we didn't get to see (because it happened on the day of) was Wyatt's Solo Ceremony, but I snagged some pics from the FB site :D

First they cut a piece out of the back of the cadets' shirts.  They record the details of their solo on the cloth and present it back to them as their "tail-feathers". 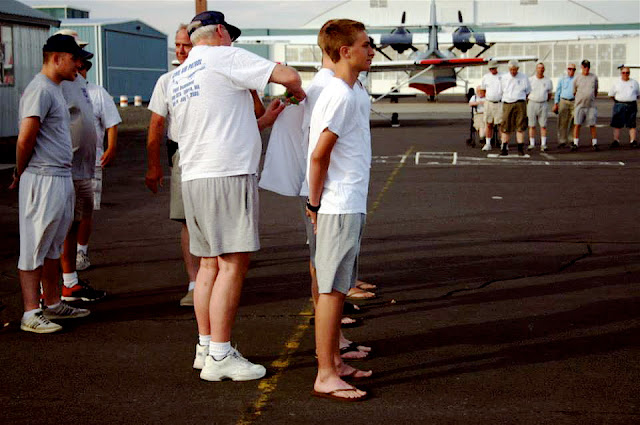 Then they dump water on them!  I'm sure it was welcome in that hot climate! 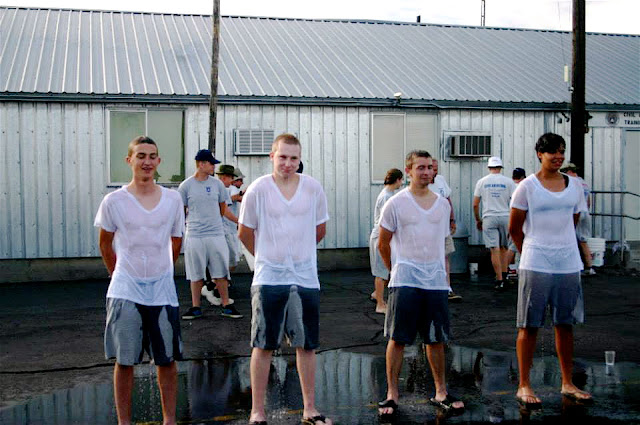 And, handshakes and congratulations all around :D 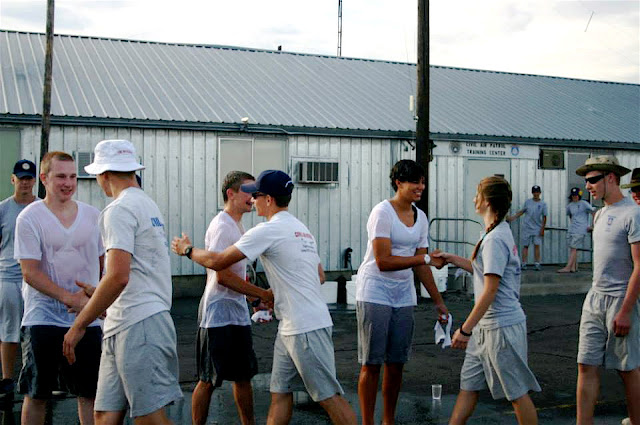 After the ceremony and the inevitable clean-up, we headed home by a different route.  Kerry wanted to visit a friend and I wanted to avoid Seattle weekend traffic ;D  Kerry had to drive the (empty) CAP van home, so we ended up leap-frogging most of the way.  I probably shouldn't admit to you that most of these photos are stills captured from video he took while he was driving, (since I was also driving and don't take photos at the same time!)

This, I think, is the Colockum Tarps fire, which contributed to the gorgeous sunset the night before. 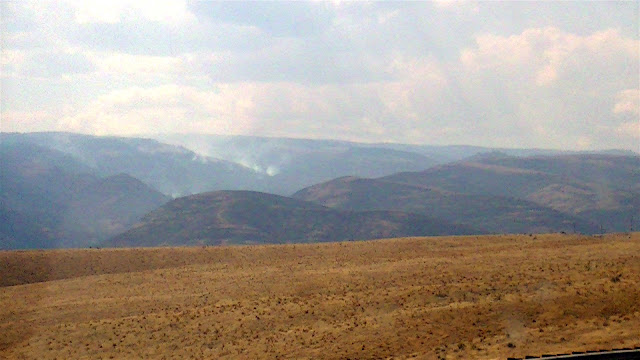 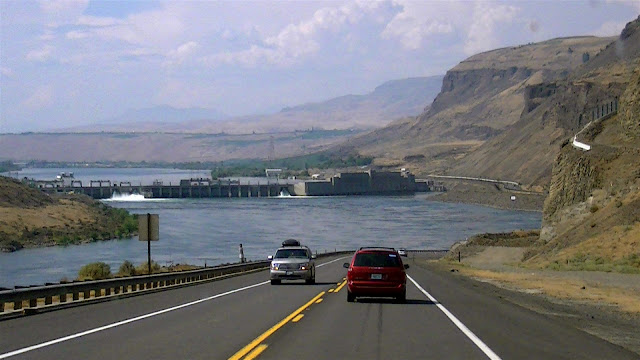 We stopped in Wenatchee to see Kerry's friend John.  He's a big kid.  Inspired by some "artist" who has been painting trees in Seattle, John painted one of his mom's trees ultramarine blue.  In her oasis of a yard the tree really looked amazing.  I'm tempted to try it at home! 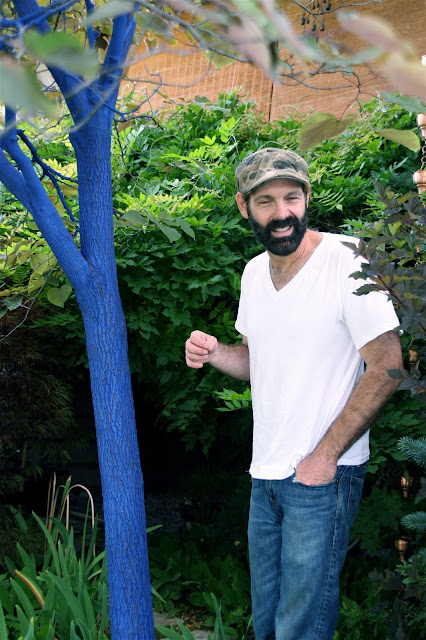 With another three to four hours of driving ahead of us, we couldn't stay long.  We had to get up and over Steven's Pass to get back to the "wet/west side".  And oh boy did we get rain!  Those thunder clouds I mentioned?  We were under them for a good half hour.  I've never in my life seen it rain so hard.  You could see the individual rain "drops" coming like missiles.  But once we got over the pass it was sunshine all the way :D

We had one more necessary stop on the way home. 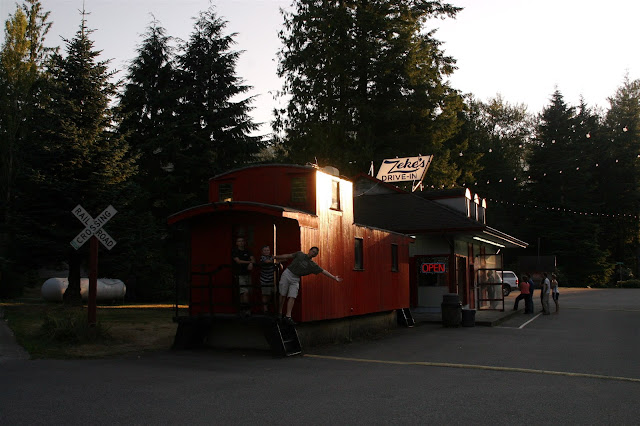 Let me just give you a word of advice.  If you ever find yourself in Washington, on Highway 2, make sure you stop just east of Gold Bar at Zeke's for a burger.  I've been stopping there for over twenty years.  Huge burgers.  Many flavors of milkshakes.  And the onion rings... mmm mmm.

And a bit of local history, too. 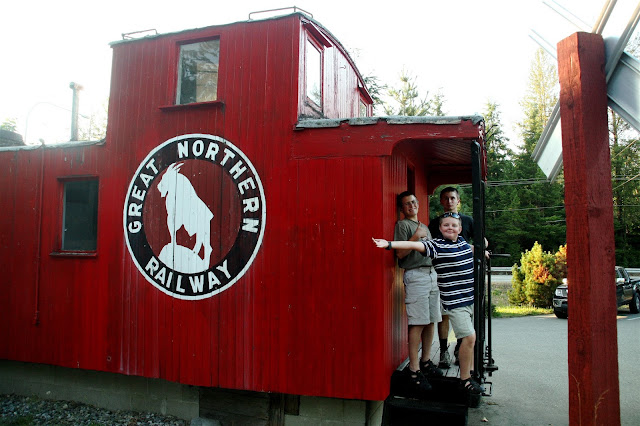 Back on "our" side of the mountains... hot air balloons at sunset! 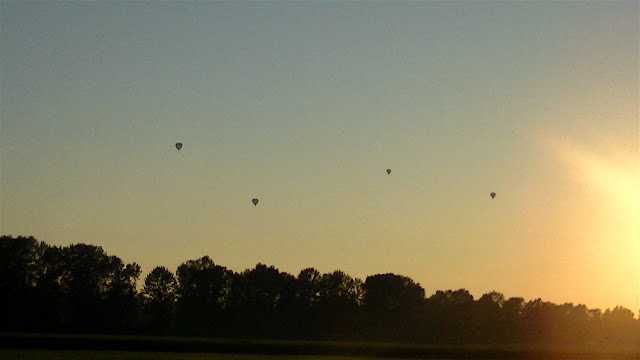 And Kerry was looking back at the clouds we'd been under. 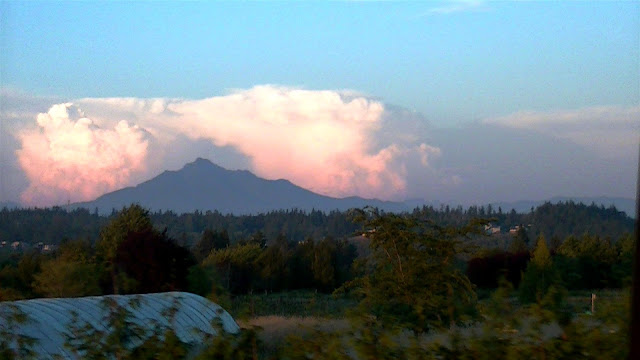 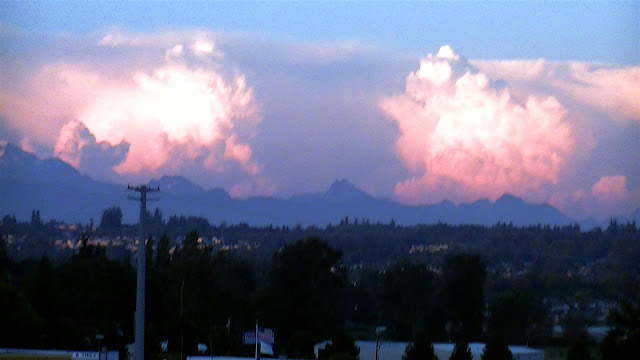 They covered Mt. Baker to the north also.  So glad we weren't camping under those! 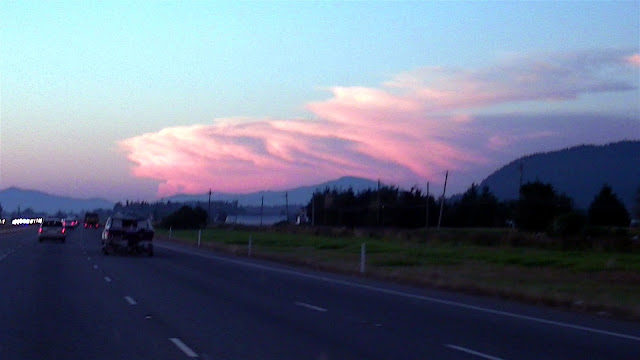 And then we all felt like Dorothy... there's no place like home :D
Posted by Herding Grasshoppers at 10:57 AM

Well done, Wyatt! except maybe for that back flip that wasn't... Just keeping it real, Mom! ha ha

A big congratulations to Wyatt. What a fabulous camp.

Dry and petrified forest - looks a bit like AZ!

Glad everyone is home together and safe again.

I'm always impressed with your CAP reports. So interesting. Those big clouds.... I think that was part of the storm I was praying through as I tented in the high country of BC.

Congratulations to Wyatt for the solo flight! I miss the west - and the mountains! Sigh..

The painted tree looks pretty cool - I like the blue color!

What a great trip! So thankful you guys got to go cheer for Wyatt and that the boys get to participate in CAP. Love the weather reports and the pictures as you drove along :-) I'm always up for onion rings, too.