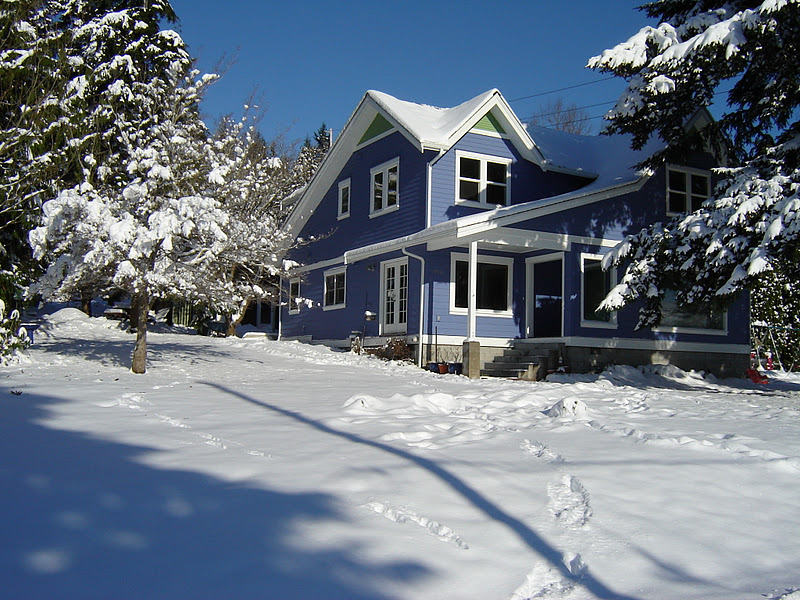 Outside my window...  brrrr.  See yesterday's photos.  Actually, it's about ten degrees warmer - mid 20's instead of mid teens, so, you know, practically balmy.  *eyes roll*

Hearing...  Gunnar in the shower, the furnace blowing (thank the Lord for central heating :D), but no wind today- yay :D

Pondering...  you know what tonight is?  And I don't mean Monday Night Football.  The last Messiah rehearsal.  And there was much rejoicing.  Love doing it, then love when it's done.

Praying...  Wyatt is having a very challenging week.  It's finals week at college AND things are heating up at UPS.  He had to be at work at 2am this morning, and I assume that will continue.  Also praying for NO snow (the boys don't like when I say that) while we have some special events to be driving to - like Messiah concerts later this week.  And next week we're taking the boys to Seattle to see the Pacific Northwest Ballet's Nutcracker.  It's really special - all the sets and costumes were designed by Maurice Sendak (think Where the Wild Things Are).  And it's the last year they're doing it (after maybe 32 seasons?  Is that right?)  Anyway, I'm really looking forward to it!  Gunnar said, "Oh Mom, wouldn't it be fun if it snowed that day?"

Child of mine.  Are you MAD???  NO, that would NOT be fun to drive to Seattle in the snow on a Friday, thank-you-very-much.  It can snow AFTER THAT.

So *ahem* in case you're wondering...  The photo above is from another year.  We have no snow at this point.  Nor do we have that large fir tree in the right of the photo.  I really need to update my "winter" photo.  Because, you know, the fate of the world is hanging on it.  Or not.

Thankful...  Kerry has been working steadily.  Hallelujah.  Also, since the chapel kids will be prepping for their Christmas program I have no Sunday school prep for the next three weeks.  Not that it's a terribly onerous task, (I enjoy it!) but it's a good time of year to have a break :D

Wearing...  my grubs.  I like that.  It sounds kind of official, like scrubs, which would make the things I'm wearing sort of a uniform, rather than just old clothes.  My grubs.  Because Gunnar and I will go for a walk in awhile and I'll get all sweaty.  Then there will be a shower, followed by acceptable-for-being-seen-in-public clothing.  Which will undoubtedly involve lots of layers, like denim, and a sweater.  Because BRRRR.

Creating...  nothing I can show just yet.

Going...  for a walk with Gunnar soon.  The sun is up so I keep hoping it will warm up a bit.  Maybe?

Looking forward to...  no more Monday evening rehearsals.  I do enjoy them, but it will be good not to have to go out.  It's not like I'm phobic about it or anything, but there's something about leaving home in the evening when it's already dark... it just feels wrong.  I'm a home-body.

In the kitchen...  we had Thanksgiving Dinner: The Sequel last night, and now I'm down to just a bit of leftover turkey.  Don't think I'm complaining.  This household LOVES turkey.  Maybe turkey taquitos tonight?  Or turkey pot pie?

In the learning rooms...  I'm going to make Tate and Gunnar each a master list of schoolwork-to-be-completed before Christmas break.  I think they'll both want to work ahead and get done early.  Tate is highly self-motivated and often finishes early.  Gunnar is usually more of a do-today's-work-today kind of guy.  But around the holidays?  He wants to get school out of the way and move on to Christmas!

Around the house..  we're about half decorated.  The boys helped me clean and move furniture and we have a nice empty spot waiting for a Christmas tree.  The question is when we'll get out to GET it.  Maybe soon, with this nice clear weather - much more fun than tromping in the mud and bringing a dripping wet tree into the house!

The Mother Load...  if you're done with your Christmas shopping, just don't tell me, okay?  I'm hoping to do most of the rest of mine online or in my craft room ;D  I need to finish decorating (decide what to use and what to store or get rid of).  Tate wants help studying for his (written) driver's permit test.  I promised Wyatt I'd make biscuits and gravy for him to have before work in the morning.  And laundry, and cleaning, and tidying, and....  *sigh*

Something fun to share...  first the not-so-fun part: my everyday pair of Danskos finally fell apart.  (Shed a quiet tear with me for my blue Danskos, all right?  Moving on...)  If you don't know Danskos, they're kind of spendy.  But oh-so-good for your feet and pretty long-lasting.  I think I've been wearing that pair for about five years.  So (here's the fun part) I talked with Kerry and ordered a new pair.  But which to choose?  I was leaning toward these:

because... classic, classy, go-with-lots-of-things.  But also, not on sale.  Boo-hoo.

And then I saw these: 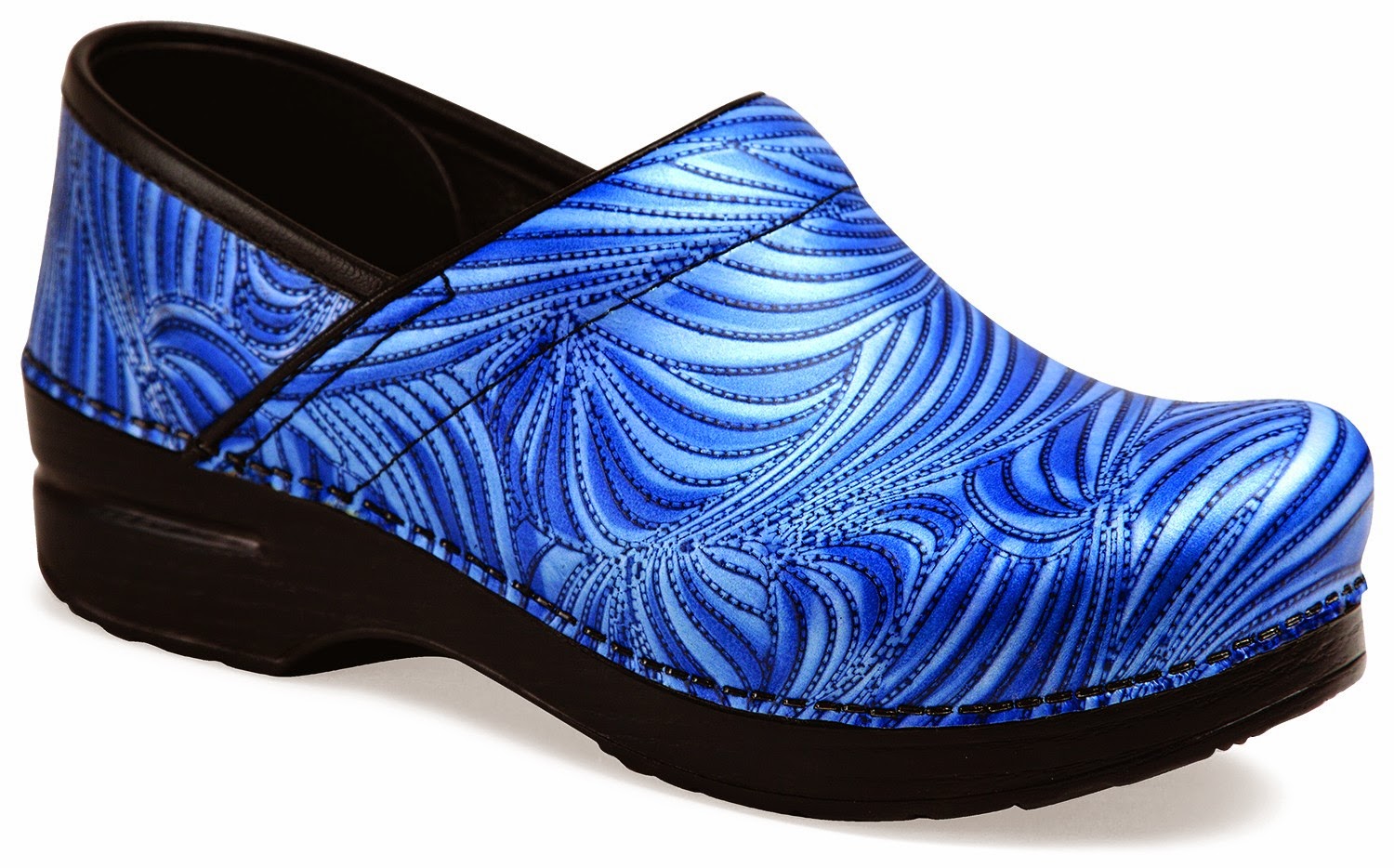 and HELLO FUN NEW SHOES!  I don't think they're actually quite that bright in real life, but if they are? GREAT!  And on sale!  (Still spendy, but about thirty bucks cheaper than the others.)  And should arrive tomorrow :D  So my Christmas is coming early.

A favorite quote for today...

O ye heights of heaven adore Him
Angel hosts His praises sing
Powers, dominions, bow before Him
And extol our God and King
Let no tongue on earth be silent
Every voice in concert ring
Evermore and evermore.

One of my favorite things...  Christmas lights :D

A few plans for the rest of the day...  see Mother Load, above.

Gunnar and I will be on the lookout, on our walk today! 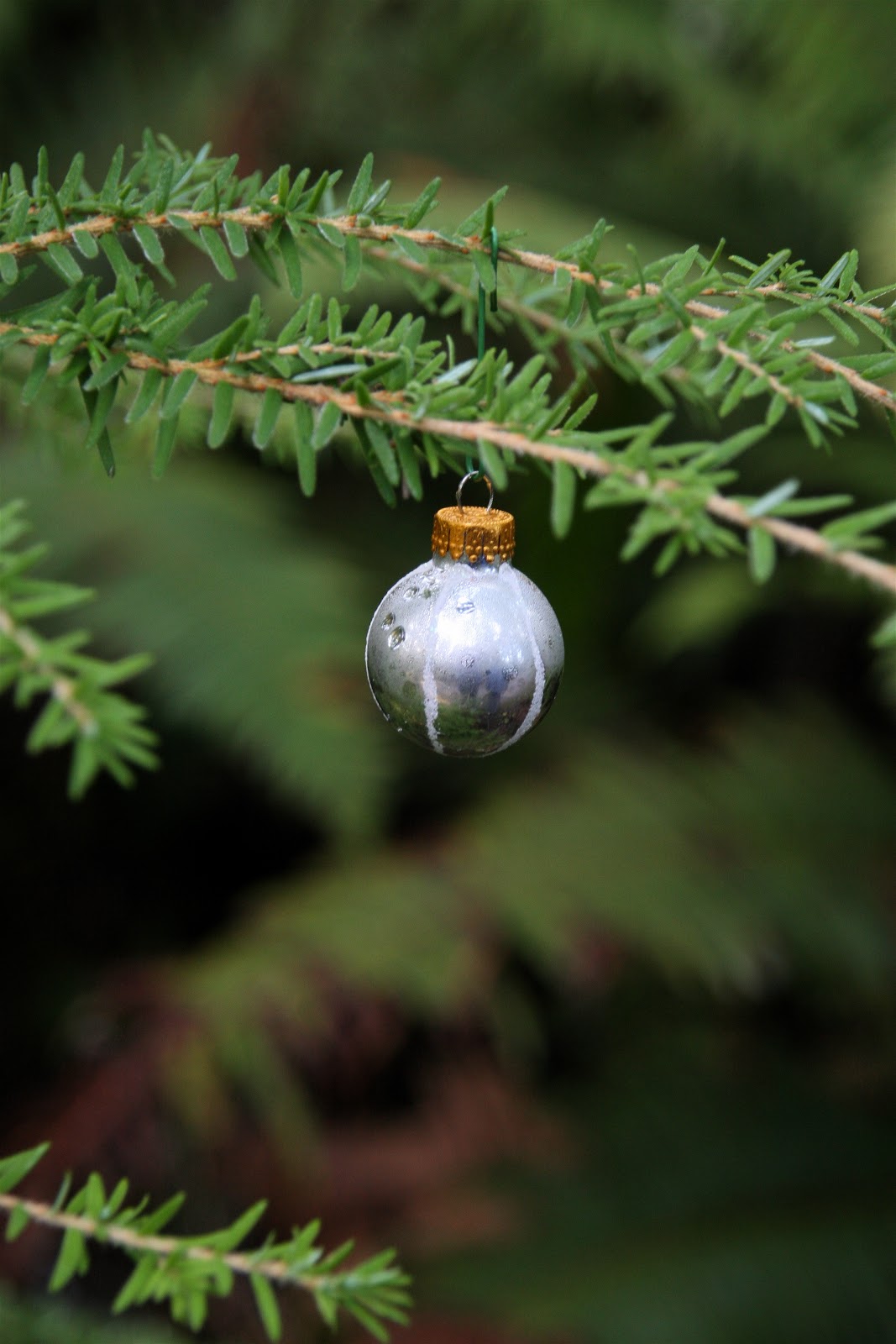 Posted by Herding Grasshoppers at 8:59 AM

So glad to know that the picture is from last year! As much as I love the holidays I am always happy when the rush part is over. I have tried to slow it down but sometimes it is just out of our control. :)
With all the cyber shopping today I'm sure Wyatt's job will pick up! :)
Hope you all had a wonderful Thanksgiving. I am just now getting around to visit.

Oh Monica, I just ordered a bunch of things too and found myself wondering if the packages will pass through his hands!

I have lost track of how many amazon and Kohls orders I have pending arrival here - crazy but I am oh so thankful not to literally tromp through stores for hours. And we will keep the watchdog chained and the driveway cleared!

What is biscuits and gravy?

Ooo, my new Danskos are on my happy feet, and (as expected) are not quite that bright, but still fun.

Melissa, biscuits and gravy... cooked (ground) breakfast sausage, milk gravy made with the drippings, served over hot biscuits. Frankly, I don't really care for it and certainly don't need to be eating it! But Wyatt needs some serious fuel :D

I'm hoping I can make the sausage/gravy mixture and freeze it in single portions as well as freezing some biscuits, so he can pull out what he wants and heat a portion at a time. Because I want to help him get through these cold, exhausting mornings, but I'm NOT getting up at 1:30 or 2am to cook breakfast from scratch ;D

Your shoes are so neat!!! Christmas cards...I had mine addressed and ready to go, but the stamps...oy! I have to wait and realized how I had written 40 cards. Why? I tell myself every year that I will have cards ready to go and as I get them I will mail them out to better keep track or something...I can never do it. I love to send out a little Christmas cheer :) Have a wonderful week!

Oh Jhona... the Christmas cards! I have this dream of getting them done early - maybe send them out before Thanksgiving and write a What I'm Thankful For This Year And Merry Christmas letter. Sounds good, doesn't it? But it hasn't happened yet.