Three years ago Kerry and got away for a few days to Winthrop for our 20th anniversary.  Took a drive one day and stopped in at a wonderful little quilt shop in Twisp, The Quilting Hive.  Kerry had always wanted me to make him a quilt reminiscent of a piece of art - a painting - he'd seen in college and sketched.  I don't think they called it "ombre" back then, but that's kind of what it was.  Vertical lines, fading from bright to light, in opposite directions.  The original piece was purple and green, but purple isn't so much his color (diehard WSU fan), so he was thrilled when we found these fabrics in these colors in Twisp.  I put this very simple quilt together for him for Christmas, and he hung it in his office.  Ta-daa.  But that's old news. 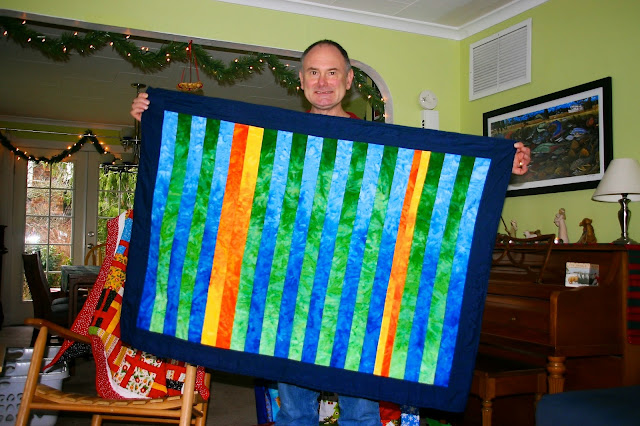 While we were picking out fabric for his quilt, I snagged a few fat quarters for myself.  Our little getaway was all about the fall colors, so these are the colors I pulled. 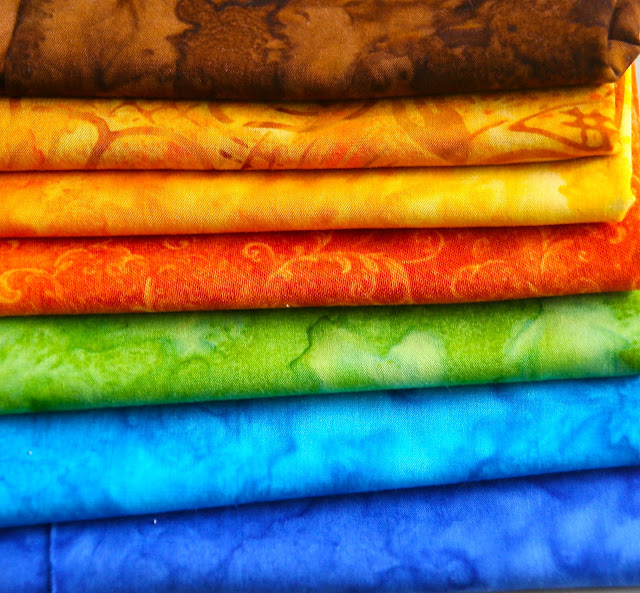 And they sat in my cupboard for almost three years.  Anyone else have trouble cutting fabric?  I mean, once it's cut, it's cut.  No going back.  I don't want to cut it until I have A Plan.

And once I had a plan I knew I needed just a few more fat quarters.

What?  You've never done that?! 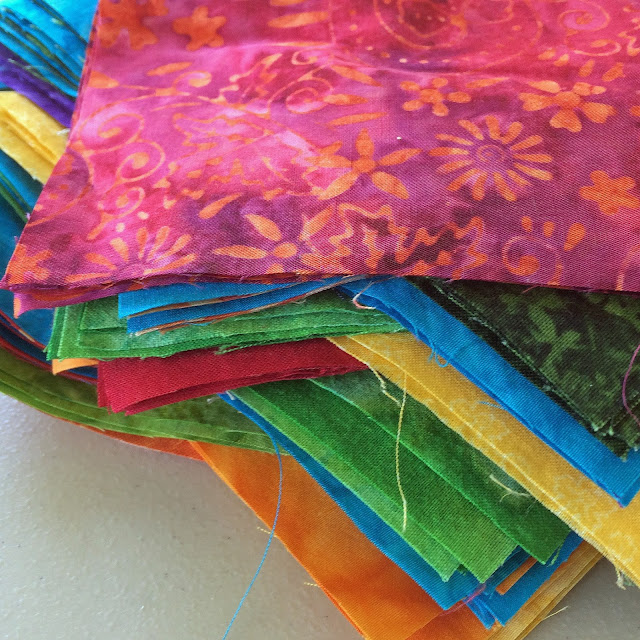 And they have to be really saturated fall colors.  Like the one above that makes me think of a Japanese maple. 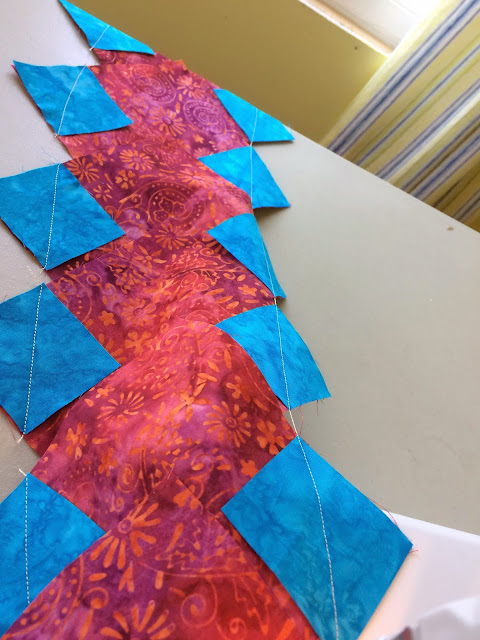 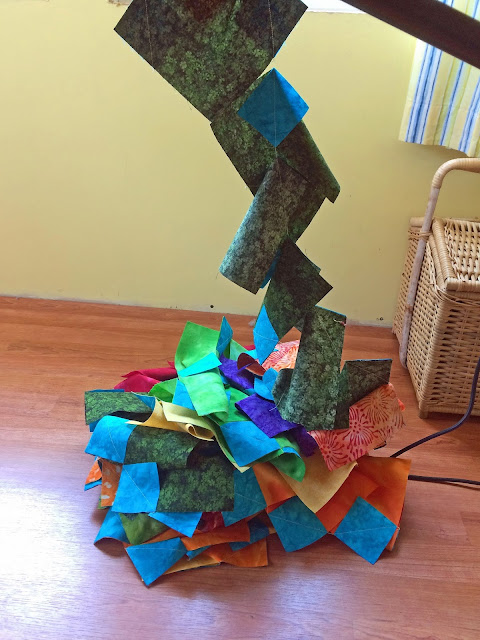 I ended up with eighteen sets of six blocks... 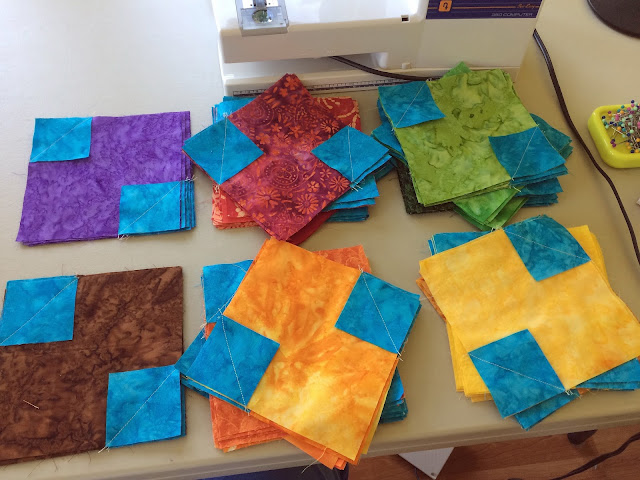 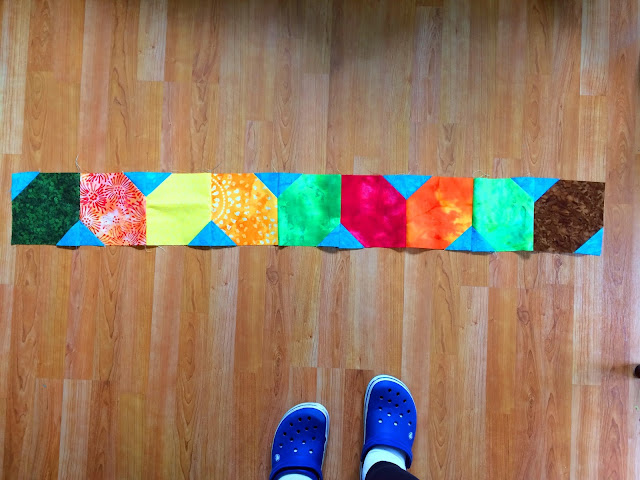 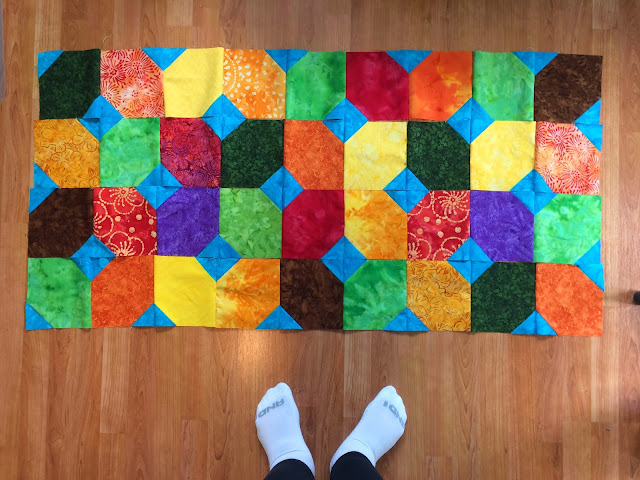 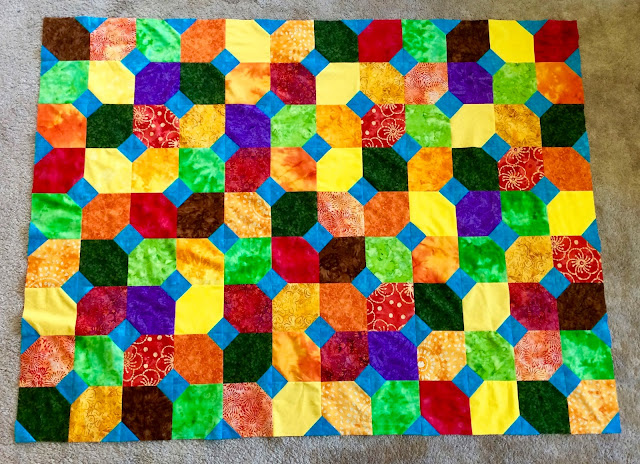 And it's backed with this fun print from Joanns.  When I saw this it made me think of the curtains in a a retro camper.  Or Chip and Dale. 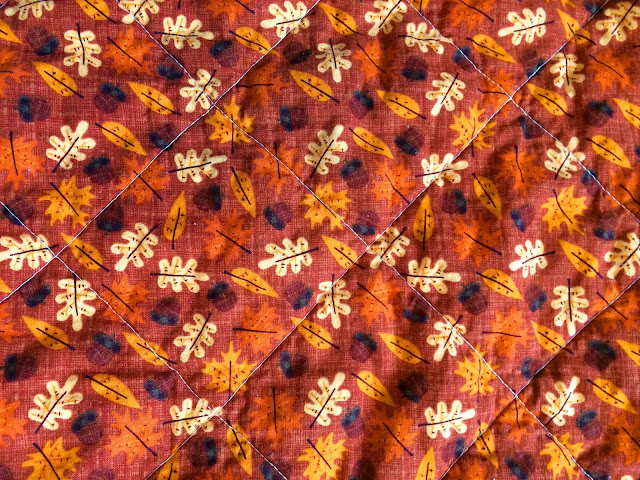 I don't know why it was so hard to get those colors to "read" right... the backing has a lot of warm, orange tones in it, and when I tried to get the computer to show that accurately, the quilting came out looking.... blue!  Actually, it's quilted in beige, which blends in well with all the colors. 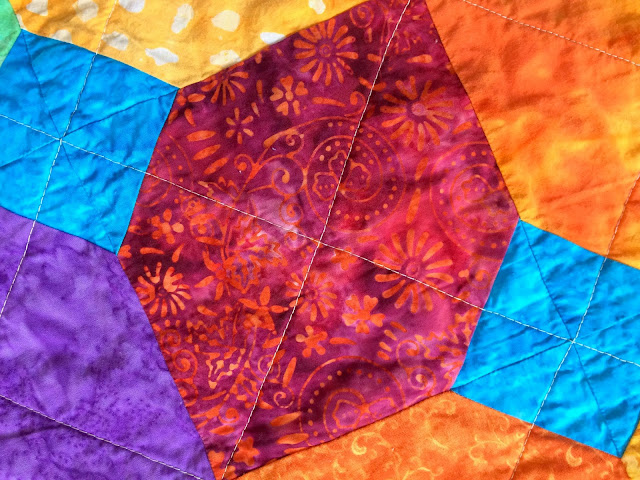 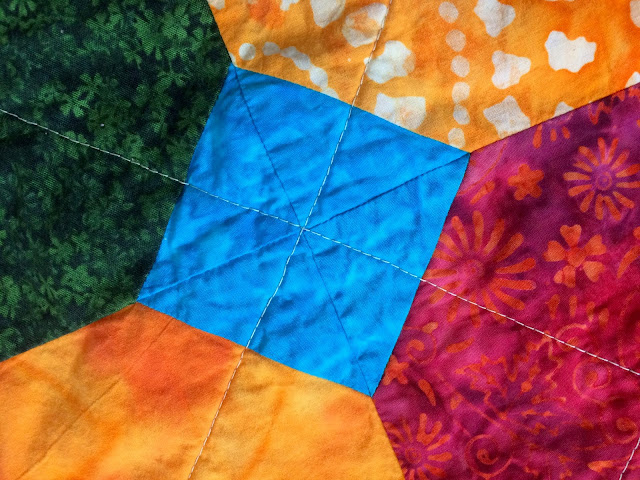 And the quilting is VERY simple - diagonal lines, to (try to) emphasize the lattice-like pattern. 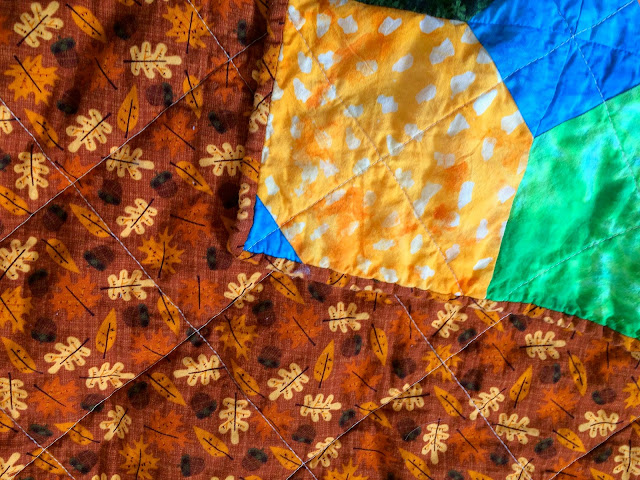 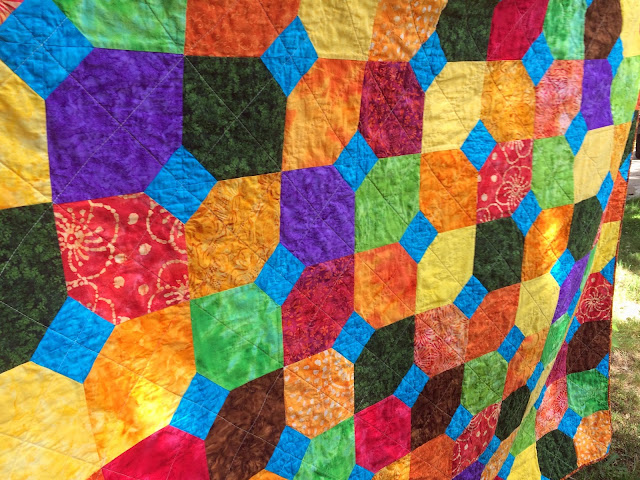 I was hoping the smaller blue square would give the idea of a clear blue sky on a sunny fall day, which is just about next to heaven to me :D 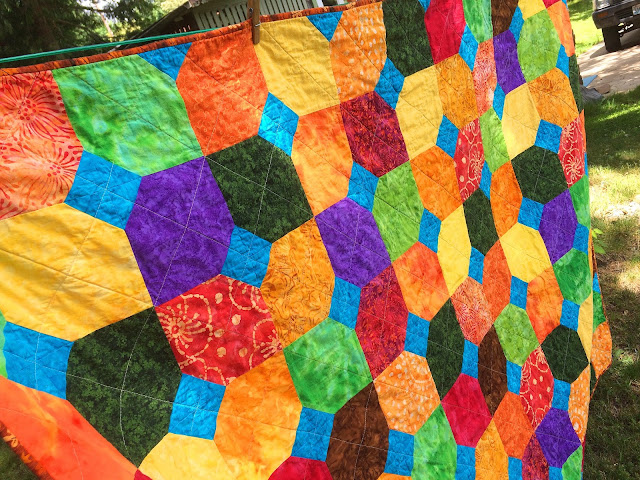 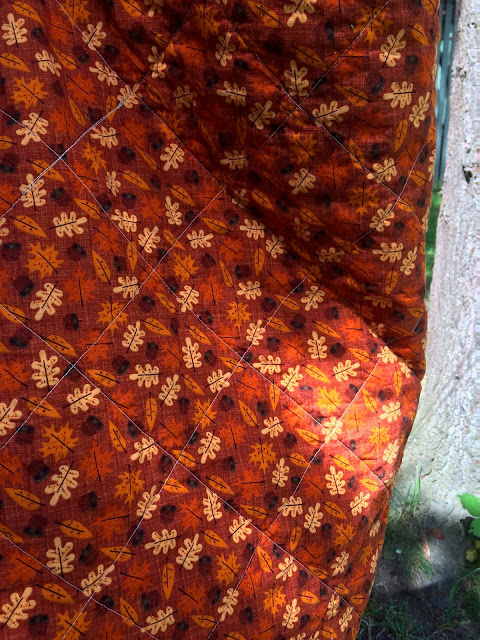 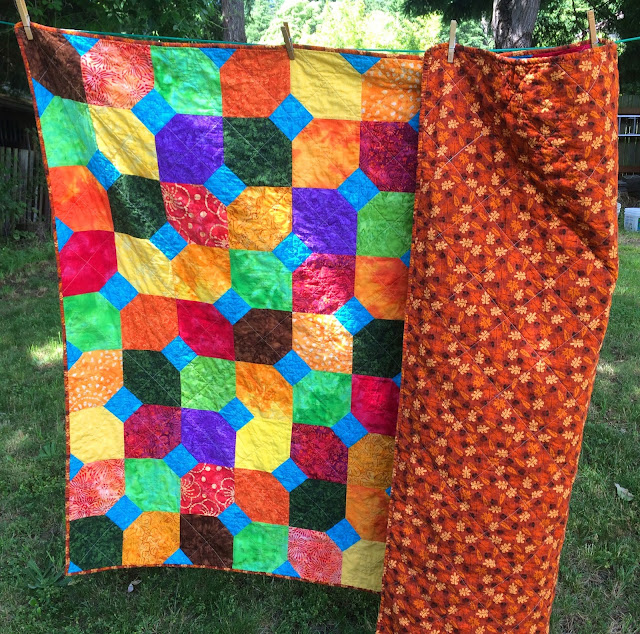 As usual, I spared no expense on my display apparatus ;D 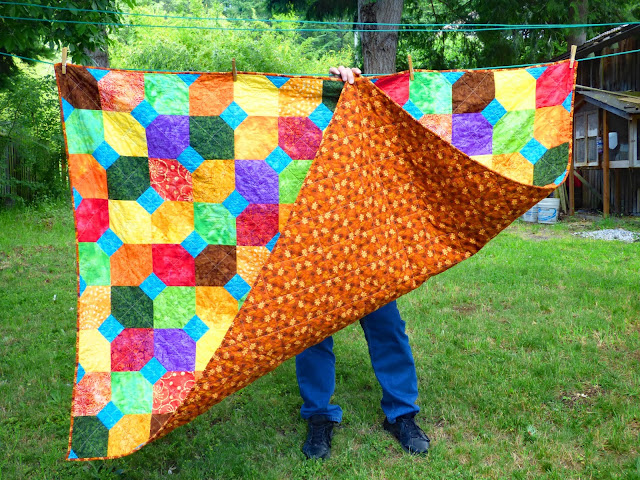 In the photo above, the backing colors look pretty true - very warm and orangey-brown - but the colors on the front look too... something.  The yellow looks too lemony.  Arrgh.  It's all very warm colors, really! 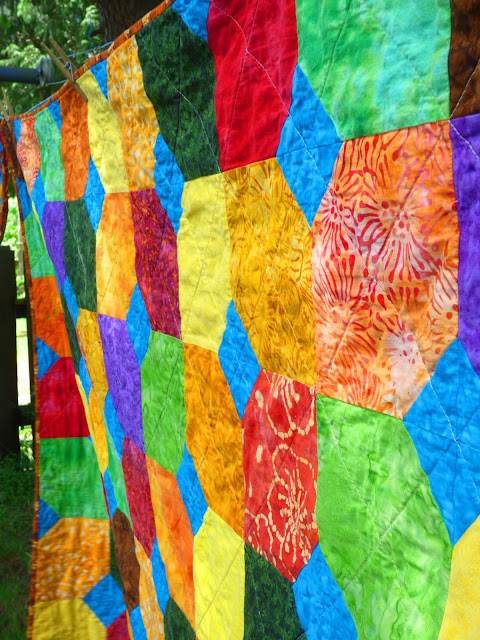 And I was able to make a fall pillow out of the scraps :D 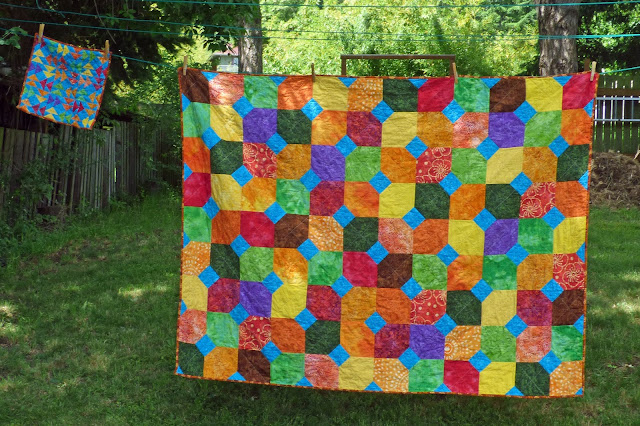 It looks just right in my blue chair, ready for a cup of tea with Han and me ;D 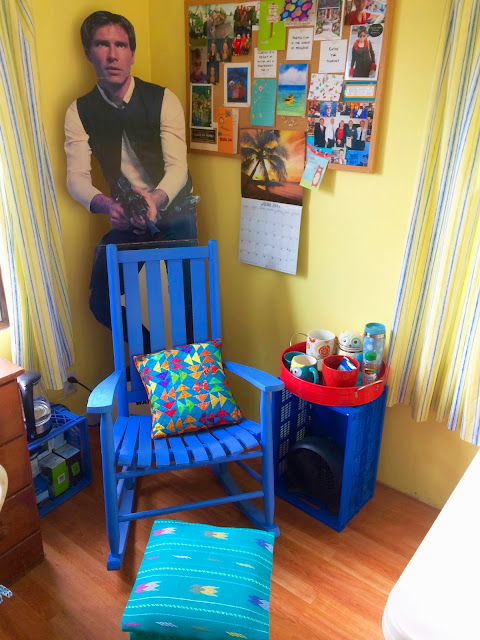 Posted by Herding Grasshoppers at 9:43 AM

That last photo of the quilt I think shows the colors you were describing. Maybe because there's less sunlight? Very beautiful very warm.

Thank you, Sara :D I think you're right about the colors. I'm getting used to a new camera too :D

Julie - I was trying to find that thing that you posted about sharing Halloween candy with father... I think that was you? Help please?

Sara - I left a message on your blog, but the Halloween candy ha-ha is here: