I've been meaning to get to this for ages, and now that I look at the pics I wonder WHY?!  ;D

Before I took a quilt class, I thought I would try to make a quilt.  I had a bunch of pieces of fabric left over from a project (can you tell I like blues?) and tried to put this together. 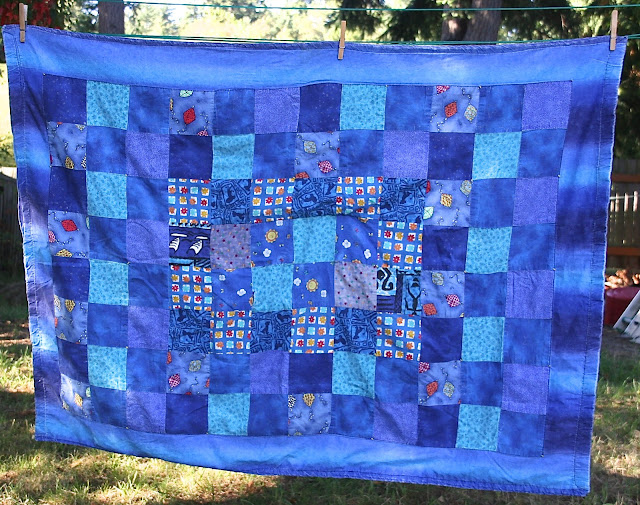 I knew there had to be a front - which you see,
a middle (I used an old blanket from my Nana - possibly wool, probably older than I am),
and a backing - an almost terrifyingly vibrant piece of fish fabric. 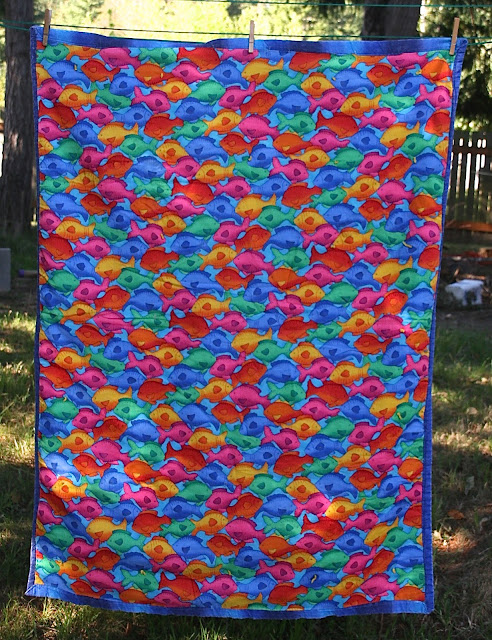 I had no idea how to do the binding, so just folded over the fabric from the front and sewed it down on the back.  I also had no idea I should pin things together, nor did I own a walking foot.  Look again at the front of the quilt and you'll see what I mean.

The layers aren't actually quilted at all.  I tied them with yarn, and most of it has fallen out.  Oh well.  When the boys were little I didn't mind throwing it on the ground for a picnic, because... who cares?

About that same time, Tate was going through an obsession with trains.  Well, all the boys LOVED trains, because isn't that genetic or something?  But Tate really REALLY loved trains.  And a special vintage steam train came to town - the Pacific Daylight.  He was in heaven. 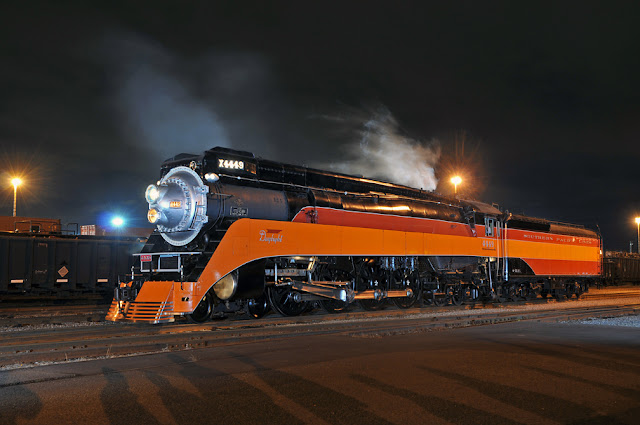 Soon after, I happened to be at the fabric store with Tate, and little Mr. Sharp Eyes happened to notice this: 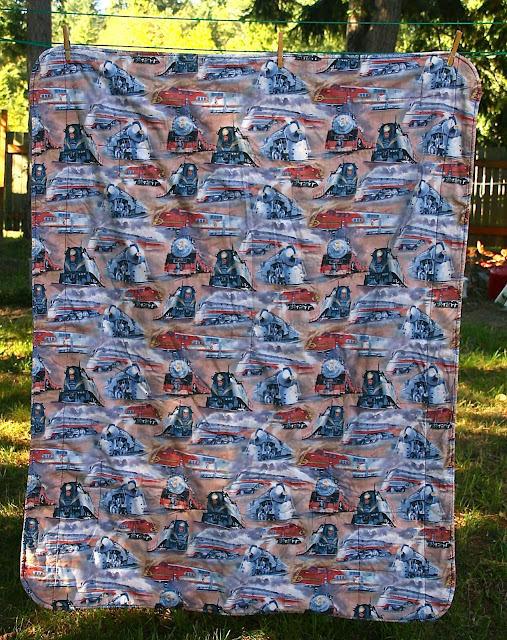 ... train fabric with the Pacific Daylight!  And the Santa Fe Chief, and a couple others (the Zephyr?).  Anyway, he wasn't the kind of kid who begged for things in the store, but I bought some fabric.  There was no question of cutting it up to make any kind of quilt pattern - I just sewed it together with a piece of fleece in the middle and flannel on the back.  By this time, I had figured out that I could sew the fabric right-sides-together and turn it right-side out to make the edges look finished.  Then, I very cleverly (/sarcasm) quilted around each Pacific Daylight to hold the layers together. 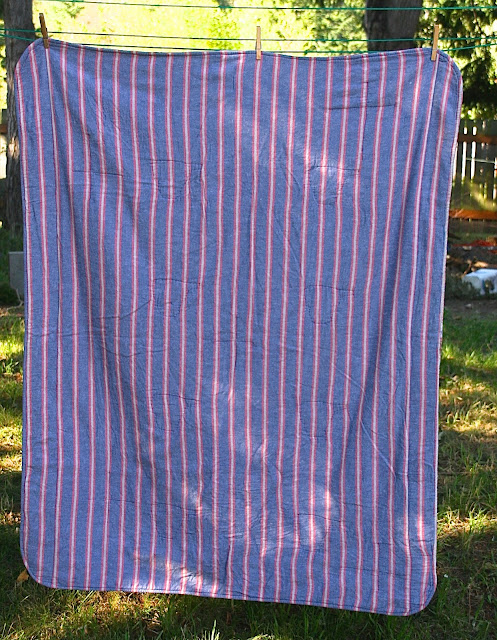 When we moved to our "new" house (i.e. the house we live in now), the boys got a big enough bedroom that we could put up both sets of bunk beds and get Gunnar out of the crib - he had just turned two.  (In our first house, the three boys shared a bedroom that was 9'4" x 9'8" - can you believe that?  I don't know how we did it, but we did. Anyway...)

They were pretty excited by their huge bedroom and all the beds!  So I thought they each needed a quilt.  Still no clue about how to actually put a real quilt together, but I had figured out that I didn't do well with too many layers.  Because, you know PINNING wasn't in my vocabulary.

So I hatched a plan that involved polar fleece.  I think I bought a whole bolt with a 40% off coupon.  However wide the fleece fabric was, that's how wide their quilts could be - genius, right? 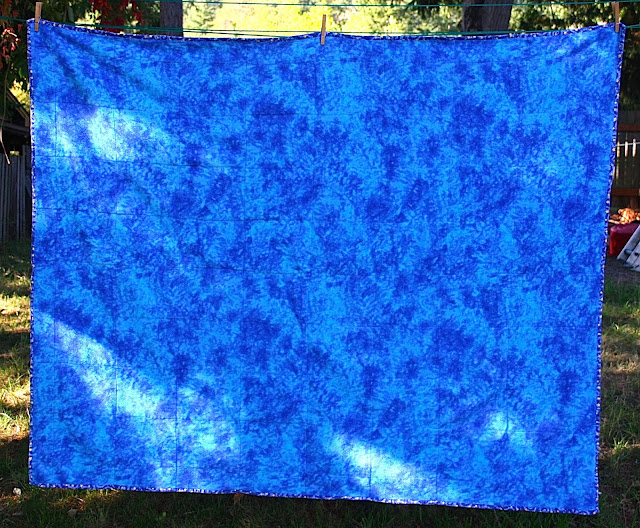 They all look like this from the back.  I choose blue and yellow to make the same border for the quilts, then let each boy choose two fabrics.  And you remember that blinding fish print?

Wyatt picked that and some neon petroglyph fabric. 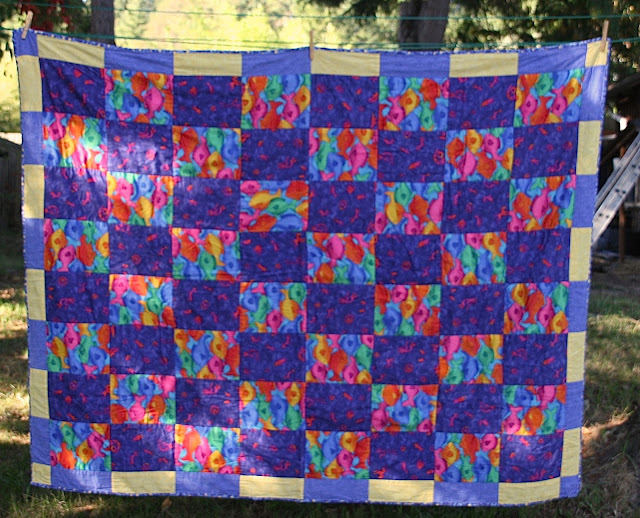 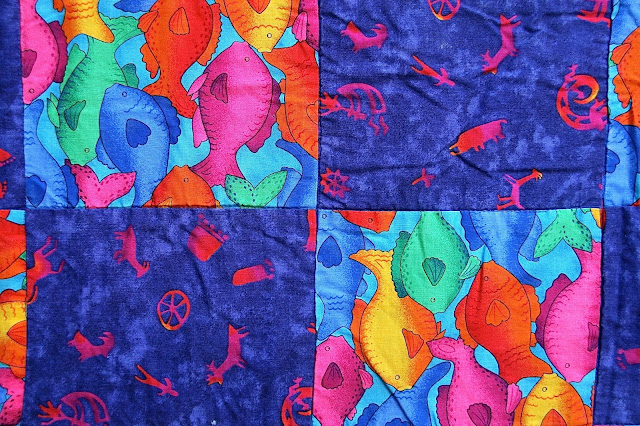 Tate - my animal lover - also liked the fish, and found some frogs and dragonflies. 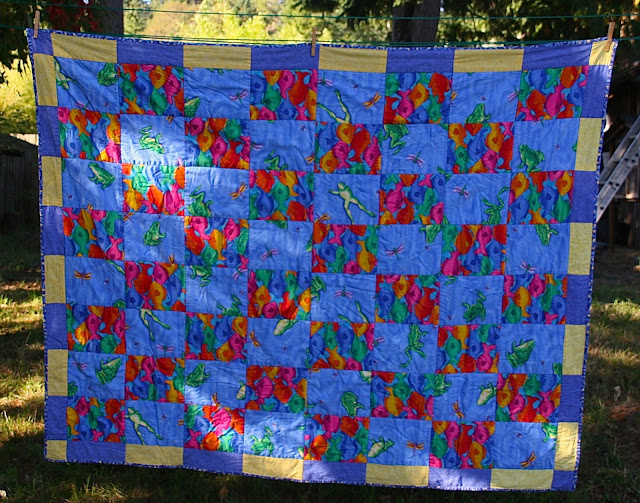 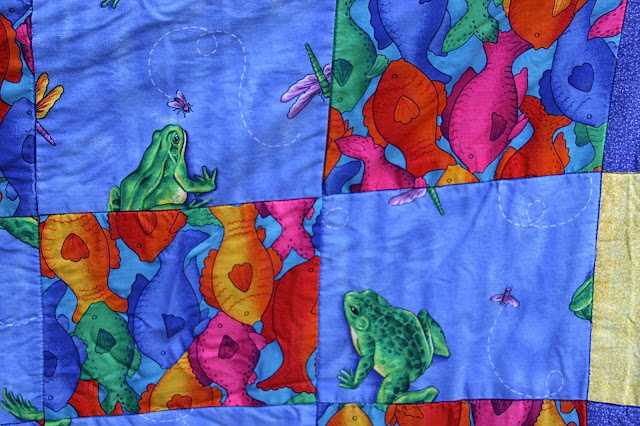 Gunnar was two, so I wasn't prepared to let him make any design decisions.  I chose stars, and a bee/honey fabric that reminded me of Winnie-the-Pooh. 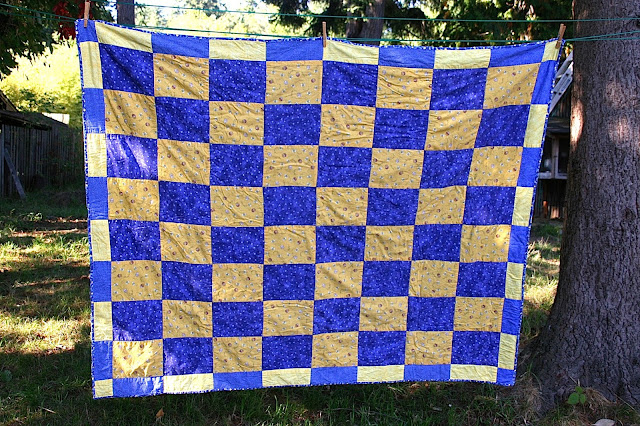 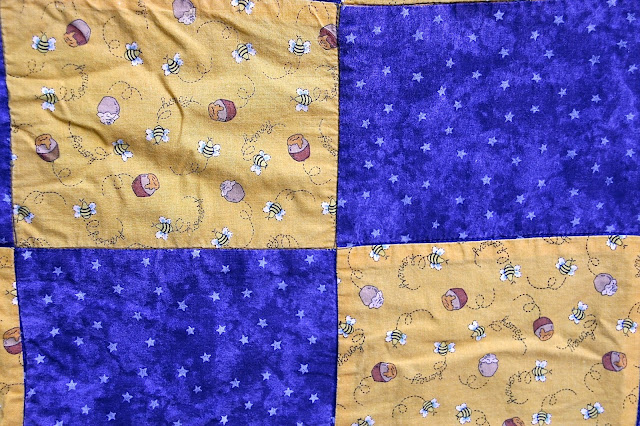 And since we had four bunks, I used scraps from all of theirs to make an extra quilt.  All different, but all similar enough that they "worked" together. 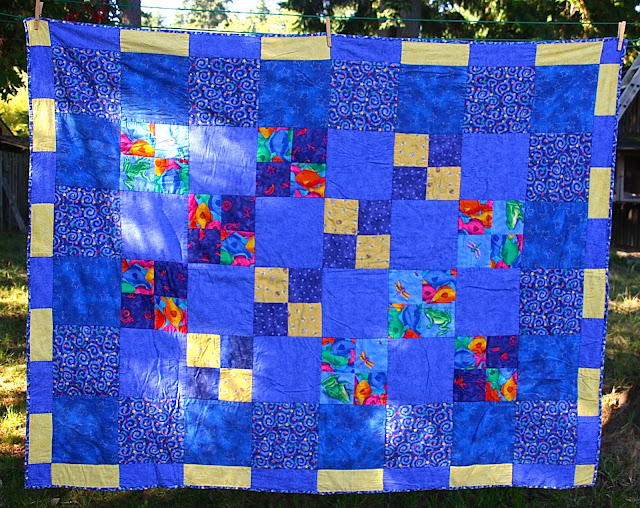 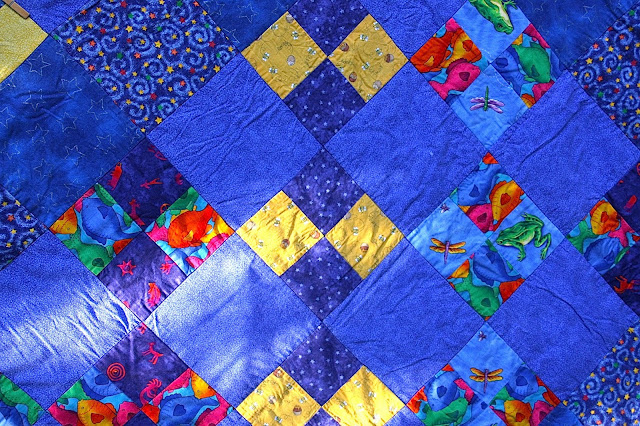 I think by this time, someone had introduced me to the concept of stitch-in-the-ditch, so these quilts - though there's no batting at all - did get "quilted", and they've held together pretty well.  And I'd learned to put a binding on.  Yay, me ;D

That was probably when I finally took a class and learned some basic skills ;D

Later we had Kerry's niece live with us for about a year, and I put this together for her. 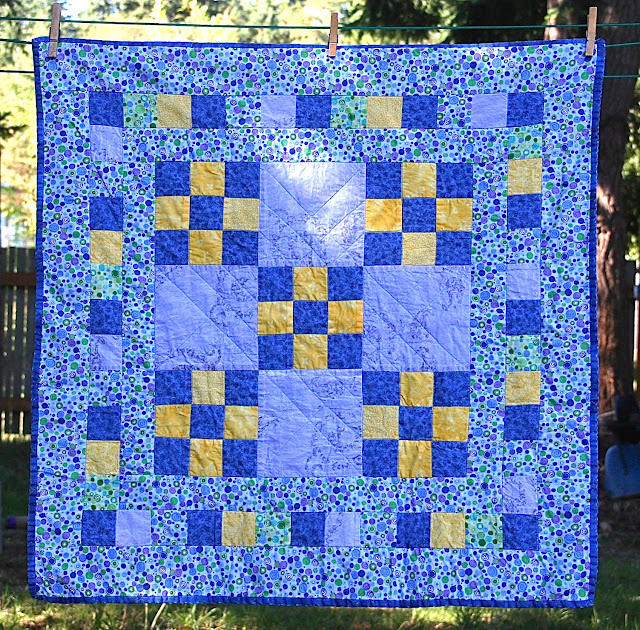 I think I must have discovered pinning, because it looks like most of my seams lined up, but guess what... 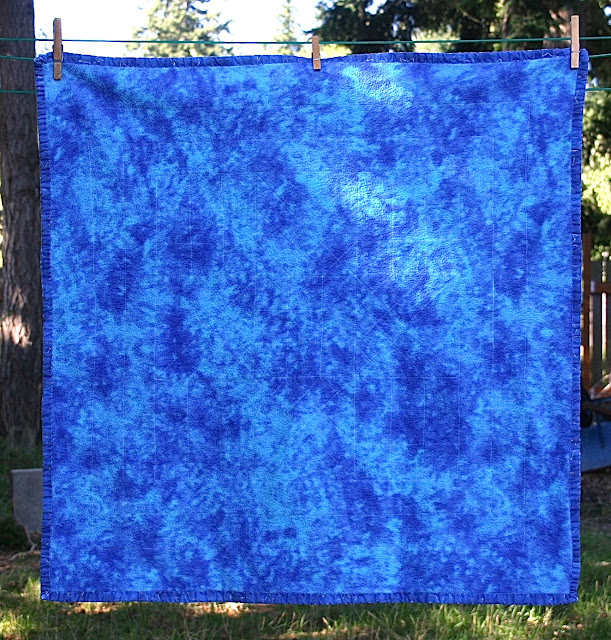 ... still no batting!  Just more of the polar fleece!  I probably didn't trust myself to quilt it close enough to keep batting from shredding, knowing I'd be washing that quilt once or twice a week, y'know?

So there you have it.  They're all very unimpressive design-wise, but functional - warm and snuggly and still in use more than a decade later :D

It is obvious that you love learning, you are self motivated and improve skills and techniques with each new project. I so enjoyed your quilting history. I am a self taught quilter and my husband and kids love their quilts. I have made them 100% by hand, I have priced on the machine and then hand quilted, I have taken apart and refurbished a great grandmother's tattered quilt and they are all so loved. Hand quilting is my absolute favorite part of the process. Today's challenge is salvaging a $25 Kmart purchased quilt that is at least 15 years old, super soft, and so loved that he can not part with it. I hope I don't mess up.

I'm laughing because my one and only quilt - a toddler-bed sized Winnie the Pooh quilt - is SO much like your first one. Olivia was a toddler and loved Pooh and the flowers on her crib bumper pads. I had leftover material from the bumper pads (mother-in-law made them), and some Pooh squares. So, I hodge-podged them together. No actual "quilting," but that thing is still together and all three kids still use it as a lap blanket! I just cringe - and am thankful that at least Angie has the quilting bug. :)

Julie, you always make me smile. Your quilts hold so many memories and your sense of humor holds your family together. I can hardly wait to meet you!

I love that you still like and use and SHOW US your early experiments.

I've done a little bit of quilting but I'm more of a hobby collector than a quilter and it shows in the quality of my work. There are a few things I do well and those are the things my grandma taught me to do.

On the couple of small quilts I made I really liked this sticky spray stuff to hold the layers together (sulky?) intstead of pins because I'm kind of a spas with sharp things.

Aw, thanks you guys :D I think I'm taking the first one on the camping trip ;D

This was a fun walk through your memory lane.