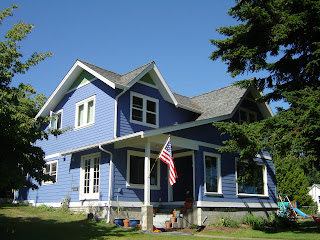 Grasshopper Days
For Today, August 22, 2011
Outside my window...  a strong breeze blowing leaves off the trees and a dark, cloudy sky.  Though the air is quite warm it sure looks like fall out there.
I am thinking...  Hmmm, some things not fit to print ;D  Mostly that I am just plain POOPED.  Had in-laws here all weekend and yesterday was hot and muggy.  Laugh if you want, because 82 isn't that hot, but the humidity?  Ugh.  Yes, I know, I'm a heat-wimp.
I am thankful for...  on his birthday Kerry took the boys out to the soccer park to search for Wyatt's lost rocket, launched previously against parental advice on a breezy day and went much further than anticipated.  (And yes, they found it.)  Also, for the cooler temps and rain showers today.  Not sure the boys were thankful for clouds and rain during SUMMER, but it made it easier to focus on school work.
I am praying for...  my mom's continued healing from her radiation, work for Kerry, and diligence in our work for the rest of us.
I am wearing...  denim capris, blue t-shirt.  Fan-ceeeee.
I am creating...  absolutely nothing, at the moment, but plans ;D
I am going...  to catch up on household chores I've neglected while we had company here.  *sigh*
I am hoping...  for a smooth adjustment as we slowly ramp up our school schedule.  Yes, we're starting early this year - banking time to take off for our vacation :D
I am hearing...  the wind rustling in the trees.  Love it.
I am remembering...  taking the boys to Mt. St. Helens, four years ago.  That was AWESOME.
From the learning rooms...  all of the boys are finishing their summer science this week.  Wyatt has been doing an overview of different systems of the body, while Tate, Gunnar and I have been studying birds, bats, and bugs.  This week it's "Leps" - butterflies, moths and skippers.  Our five Painted Lady caterpillars are just now making cocoons so they won't be hatching out this week, but still a fun part of our study.  Tate and Gunnar are just beginning some of their Language work (not much), and Wyatt has begun his first week of Sonlight American History.  He was SHOCKED at the reading list I handed him today, but probably wouldn't admit to being equally shocked at it NOT taking lots and lots of time.  I think he nearly hyperventilated when I told him to read the first three chapters in the Hakim book, but regained his 'cool' when he saw that the chapters are only two or three pages long.  Very doable.  I did warn him, however, about how fast it will snowball if he gets behind.
And that we Must Not Let That Happen.
Though they're not too excited about doing school work in August, all three boys were done by 11am, and that with the morning being very much broken up by spending time with their aunt (staying with us) and the arrival (from their hotel) and departure of the in-laws, as well as a mid-morning dash to retrieve laundry from the line when it started to rain!
And honestly, as much as I love the lazy days of summer I really think we all do better when we're in more of a routine.
From the kitchen...  leftovers tonight, after a weekend of lots of cooking.
Around the house...  with the days getting noticeably shorter (and cooler, today) it feels very cozy in the evening.  Time for candles :D
On my mind...  organizing for school, organizing for vacation, organizing birthday and wedding gifts, finding a dark suit for Kerry, who will be ushering in the wedding (hello Value Village), and a pile of ironing to do.
Noticing that...  do boys photosynthesize?  I think not, but somehow mine all seem to grow like dandelions over the summer.  What's up with that?
Pondering these words...
So do not worry, saying,
'What shall we eat?' or
'What shall we drink?' or
'What shall we wear?'
For the pagans run after all these things,
and your heavenly Father knows that you need them.
But seek first His kingdom and
His righteousness,
and all these things will be given to you as well.
Seek first, not also.
One of my favorite things...  being home with my family.
A few plans for the rest of the week...  blessedly, very little.  Just getting back into routine.
Here is a picture I am sharing...
The boys, fascinated by the stump grinder. 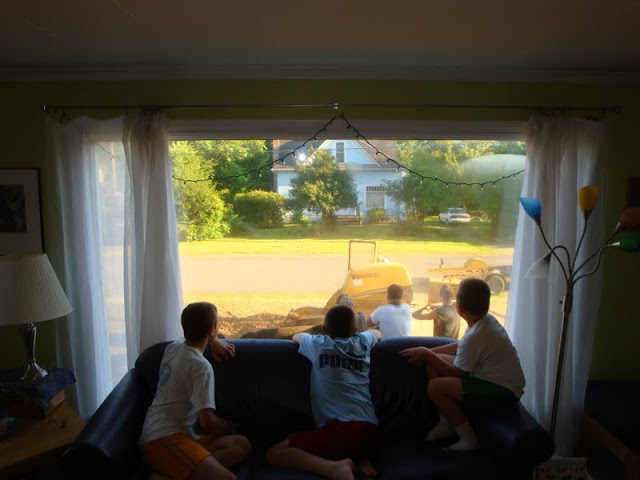 I would've been content to ignore the stump (lah-di-dah-di-dah) for a long, long time but Kerry was concerned that it would attract ants or termites.  Not a good idea, just a few feet away from the house, so away it went.
Posted by Herding Grasshoppers at 9:01 PM

Wanted to get word out to those of you who read this blog and who have been praying for me - Julie's Mom. I PRAISE THE LORD that I am DONE with radiation. I been upheld, honored, and blessed by your prayers for me. A HEARTFELT, GRATEFUL THANK YOU!!! I have some healing to do now....with a special target date of our son's wedding :) GOD IS GOOD!!!

I loved reading your daybook today!
Humidity can be pretty awful. All your schoolwork sounds very interesting, the caterpillars sound fun to watch.

Yay - I love hearing from Gramma Grasshopper!! Praise the Lord that the radiation is done and that the healing is well on its way!

We are enjoying the last days of summer with lots of play dates and water play. Except I didn't get enough sunscreen applied to Matt this afternoon, so we might stay inside tomorrow! Poor kiddo!

I hope the learning goes smoothly and that nothing starts to snowball - getting behind is never a good thing!

Yes, 82 is yukky hot when that humidity kicks in! I really, really hate humidity.

So, just out of curiosity, do you typically do school on the public school schedule? What is the schedule there? Here schools started last Monday, and they were actually a later start than many across the south.

Love the comment from your mom!! Gramma Grasshopper, I am so glad you are done! Rest up and let the healing begin! God IS good!!

We have the cooler weather too. In fact the pool is coming down very soon. Too cool to swim in anymore.

What? No hula skirt today ;oD!?