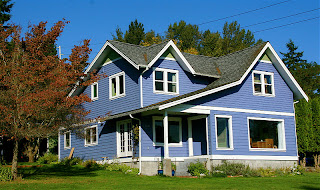 Outside my window...
cool gray skies.
Gunnar and I went for a walk this morning and if I hadn't had glasses,
I wouldn't have known it was raining lightly.
(The rain lands on the lenses.)
The cooler weather motivates me to cook more :D

Hearing...
a very quiet house.
Kerry is working out in his office,
Wyatt and Tate are at school(s),
and Gunnar is reading.

Pondering...
how good it is to have a "normal" week
between our comings and goings,
and wanting to get a lot done without feeling rushed.
Pacing...

Praying...
* Breanna in Myanmar recovering from surgery
* an older friend at church with a broken leg
* Wyatt has 25 hours of work this week, besides school
* for a peaceful and productive week

Thankful...
* so very thankful for the friendships formed and strengthened last week in Arkansas
* for a kind and generous church friend who hosts card-making parties and blesses a lot of people that way
(at her get-togethers and with the cards :D )
* for Kerry, hard at work, and that he HAS work to do
* for the older boys' jobs
* for our church family - after enjoying visiting another church, being back to ours was all the sweeter
* for my Sunday school kids' tender hearts as they prayed for Breanna and baby Lena
* for this last year of full-time homeschooling (bittersweet)

Wearing...
about to shower and get out of my grubbies...
probably jeans and a sweater :D

Going...
* to pick Tate up from school (too dark in the morning to ride his bike safely)
* to get the laundry caught up
* to make eye appointments for Gunnar and Tate

Looking forward to...
another week away!

In the kitchen...
shepherd's pie for dinner

In the learning rooms...
Tate works so independently, I sometimes forget what he's actually working on.
He'll be starting a new unit in chemistry and we'll have to decide if we need to call in reinforcements.
Gunnar was not happy to realize that it's time to do a book (and oral) report.
It's not so much the doing of it that bothers him,
but the fact that it came up right now
and I told him he should be working on it while I'm gone next week.
Clearly, he had anticipated an entire free week
to stare into the Eye of Mordor (aka play computer games).
BWA-HA-HA.
Not that I would have let him anyway.

Today...
Gunnar had an experiment to do.
We submerged a battery in epsom-salt-saturated water
and inverted salt-water-filled test tubes over the battery terminals. 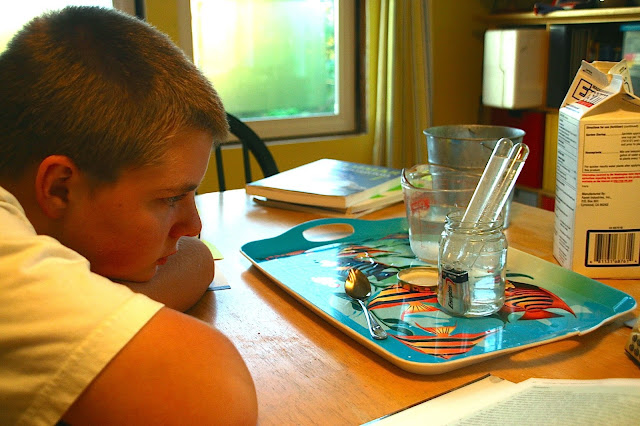 Do you know what we were collecting? 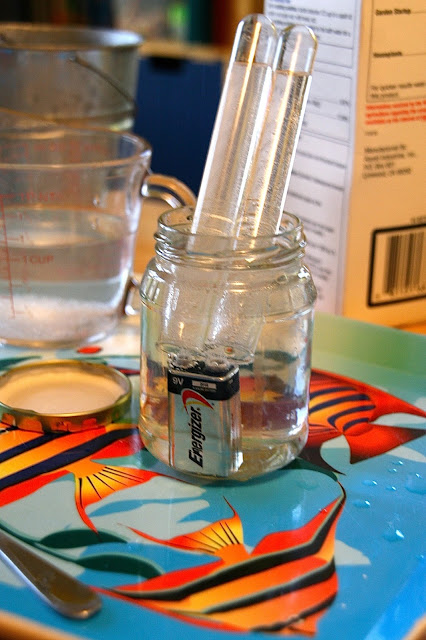 Guess which test tube caught more gas?
If you know the composition of water, you'll figure it out ;D

Around the house...
ACK!
When is the contractor going to come finish the window trim?
I seem to remember it being promised for THIS MONTH,
and THIS MONTH is nearly over.

The Mother Load...
Oh my.
It's onto two pages now.
But I'm color-coding it,
for things that have to happen before we leave.
Like finishing/wrapping birthday gifts for Saturday's party :D

Noticing that...
the days are so much shorter.

Something to remember for later...
Gunnar still tells me (repeatedly) how much fun he had on the camping trip.
Must do this again next year :D

A favorite quote for today...
From John Piper

I am wired by nature to love the same toys that the world loves.
I start to fit in.  I start to call earth "home".
Before you know it, I'm calling luxuries "needs"
and using my money just the way unbelievers do.
I begin to forget about the war.
I don't think much about people perishing.
Missions and unreached people drop out of my mind.
I stop dreaming about the triumphs of grace.
I sink into a secular mind-set that looks first
to what man can do, not what God can do.
It is a terrible sickness.
And I thank God for those who have forced me again and again
toward a wartime mind-set.

One of my favorite things...
good quality colored pens

A Bible verse / devotional thought...
He will be the sure foundation for your times,
a rich store of salvation and wisdom and knowledge;
the fear of the Lord is the key to this treasure.
Isaiah 33:6

A few plans for the rest of the week...
rehearsal tonight,
Gunnar's violin lesson tomorrow,
CAP tomorrow night,
and I THINK that's it.
Other than the usual (school).
Sounds good to me!

Out the school-room window this morning.
I love the low-angle sunlight.
We only had it for a few minutes,
before the sun got "above" the clouds. 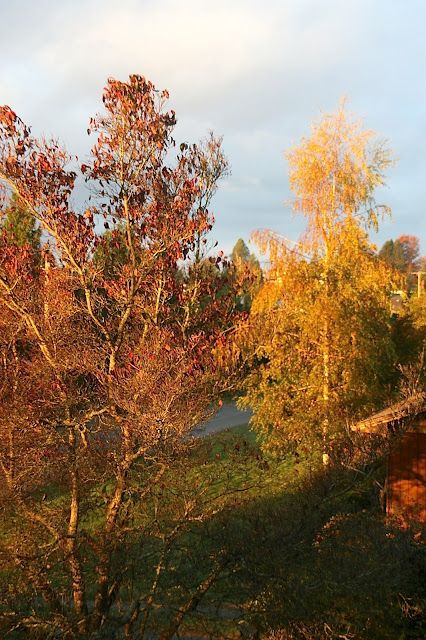 Posted by Herding Grasshoppers at 10:41 AM