you wake up in one state,
and end up in another ;D

We weren't in any hurry to part from our friends,
but our time was winding down. 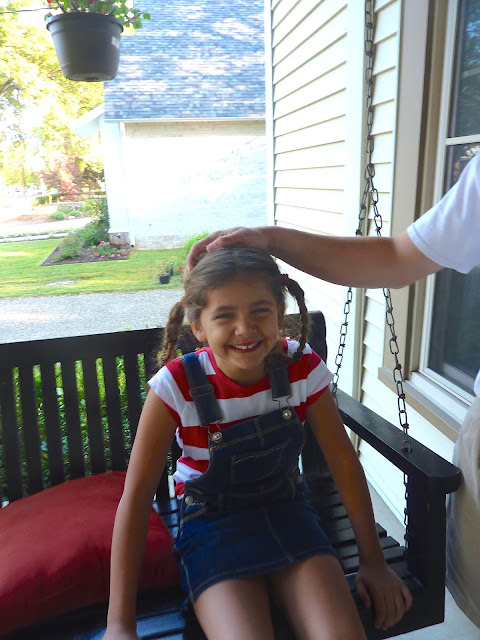 Love that front porch and the porch swing,
but love that family even more :D 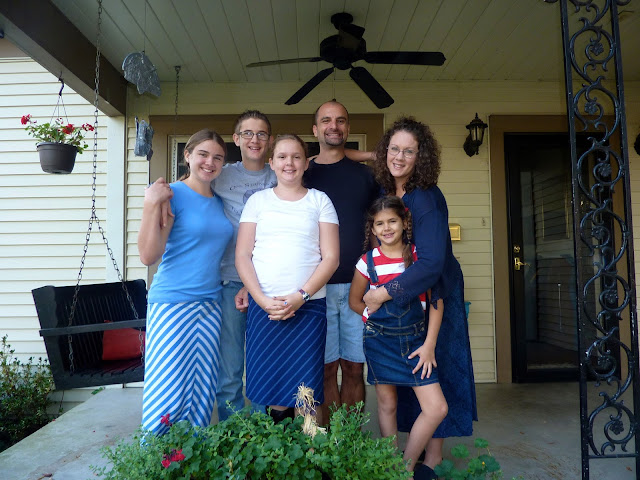 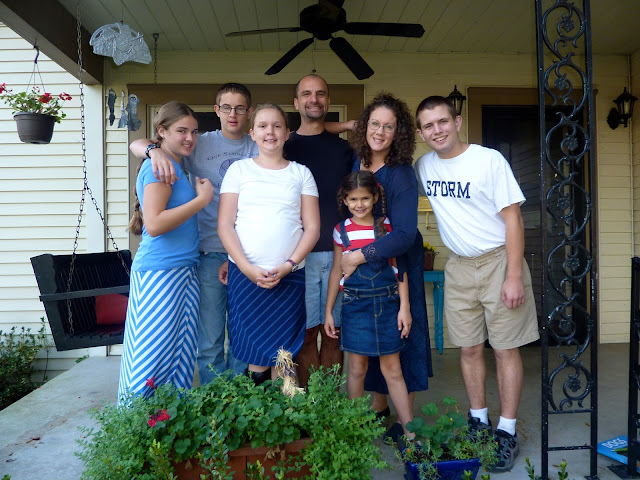 When Joanna asked what we wanted to see in Arkansas,
I really had no idea and was content to leave it up to them to plan our activities.
But Tate and I did think of one thing we wanted to see... 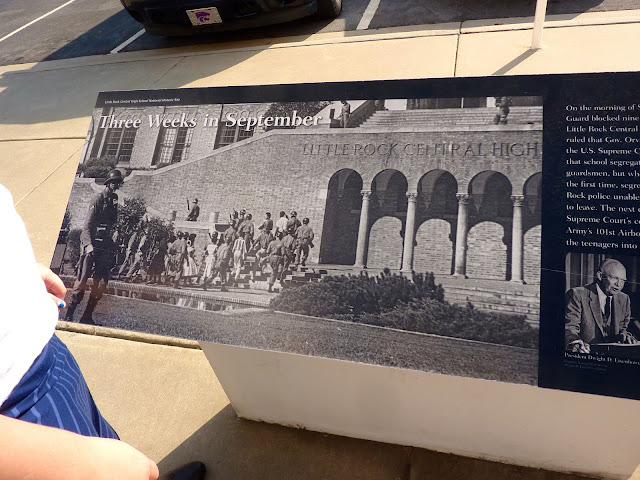 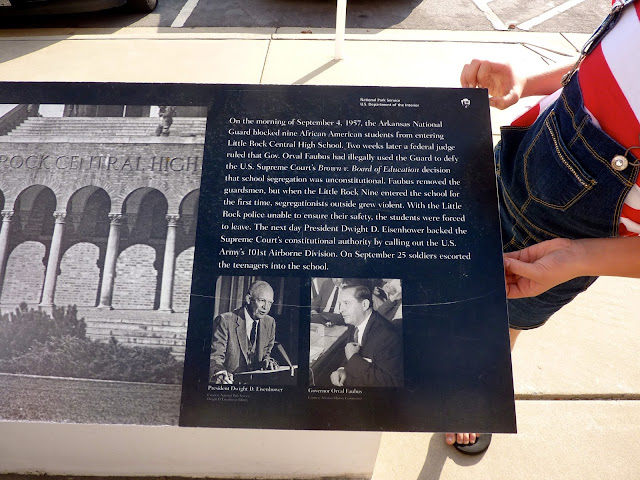 We've read about the Civil Rights Movement in our history studies,
but it seems so distant to us and so foreign to our worldview,
but in the South it's all right there in front of you.

The high school itself is still in use,
but the National Park Service maintains an interpretive center
just across the street from the school.
Well worth the visit if you're in the area...
and free!


The Hibbards were able to meet us one last time
for an interesting and educational morning. 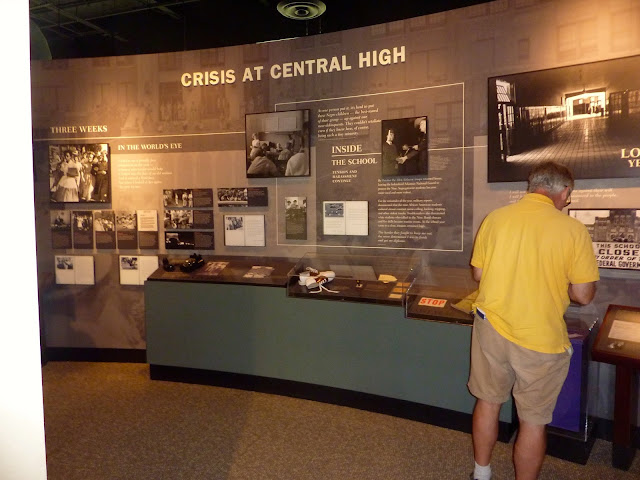 I can't imagine the courage and determination it took
for those nine students to forge a path like that,
to attend school faithfully while contending with so much hatred. 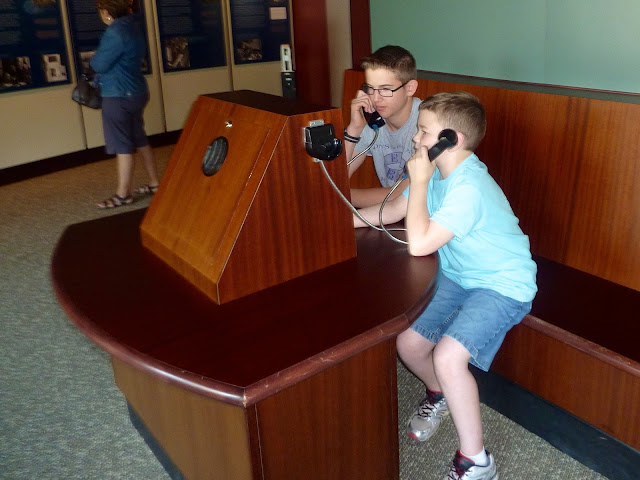 For some reason a lot of the information was presented via old-style telephones -
a novelty for kids that only know cel phones. 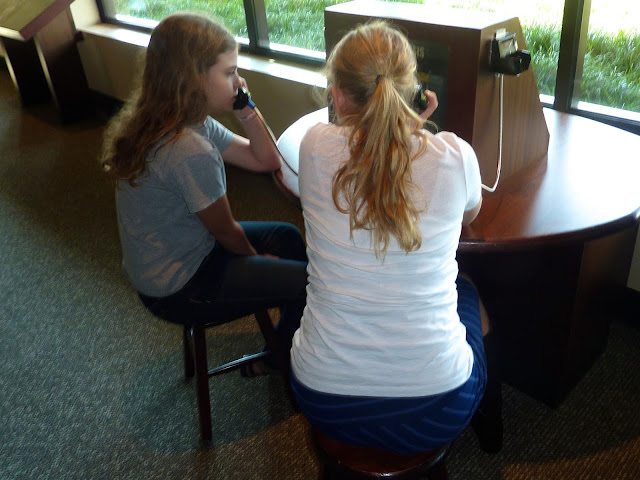 See, it WAS an educational trip!
Well worth missing a couple days of school! 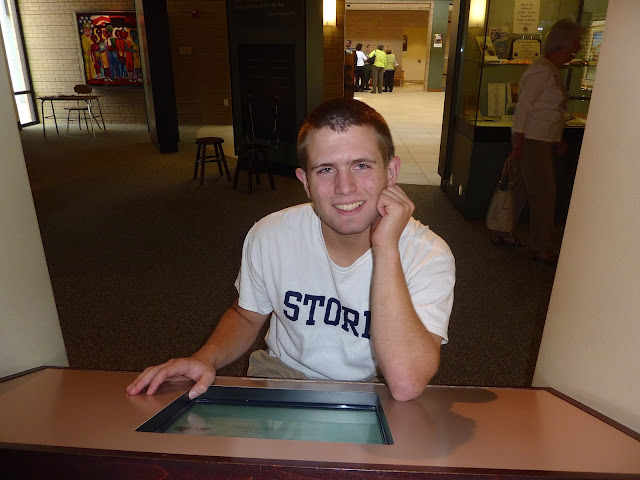 They also played a movie that must have been produced in the early to mid sixties
which featured several of the "Little Rock Nine".
In their own voices, they told what they were doing with their lives.
I believe all nine went on to college, though one chose to drop out to be a wife and mother -
a choice we support :D 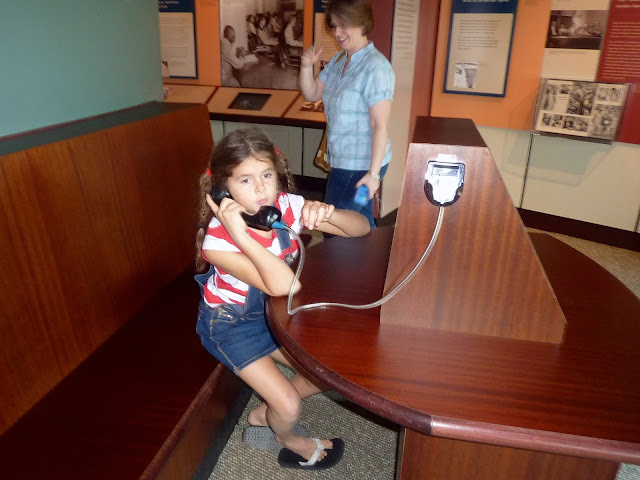 This visit was even more meaningful to Joanna,
as her grandparents were teaching in Little Rock schools at that time.
She tells a little about that here.

When homeschoolers go to the gift shop... 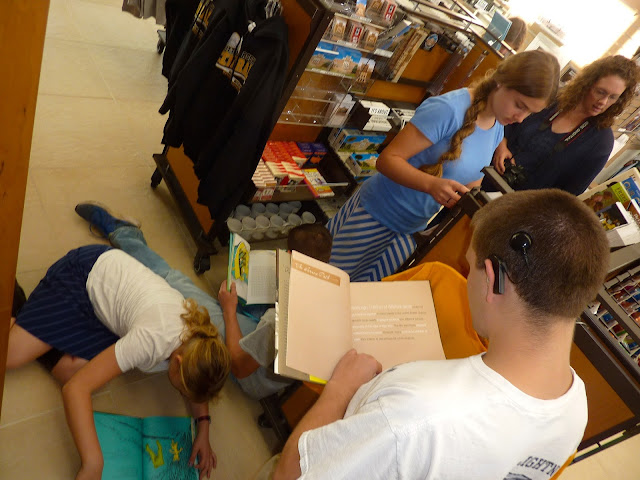 School was in session, but we snapped some photos outside. 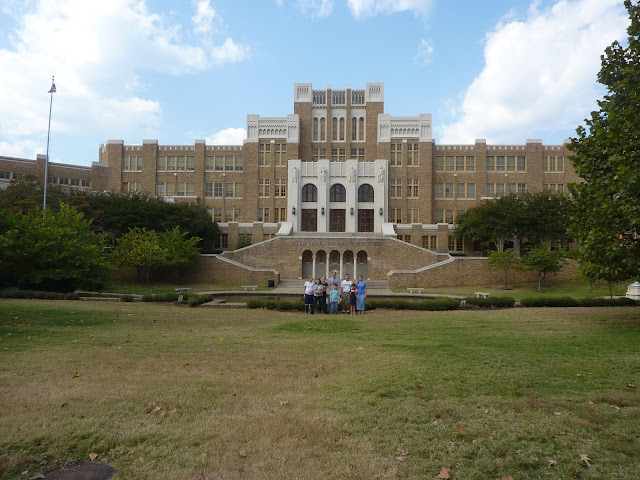 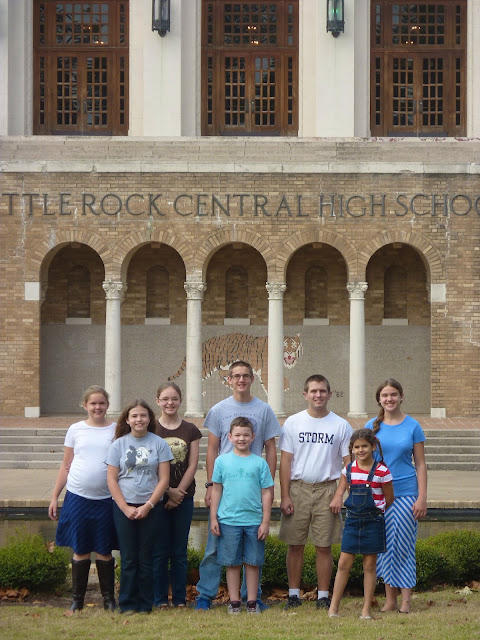 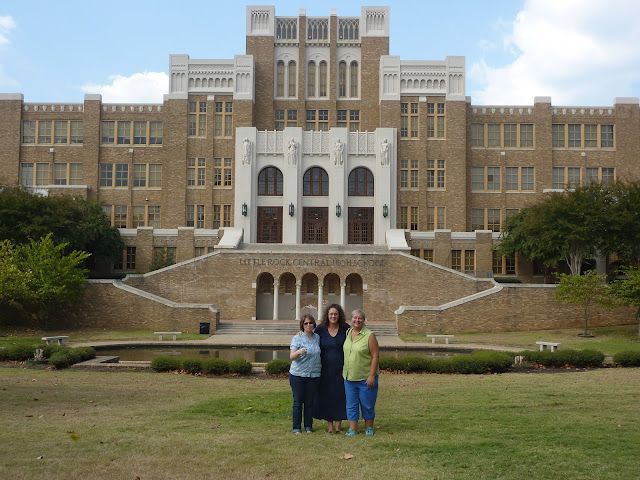 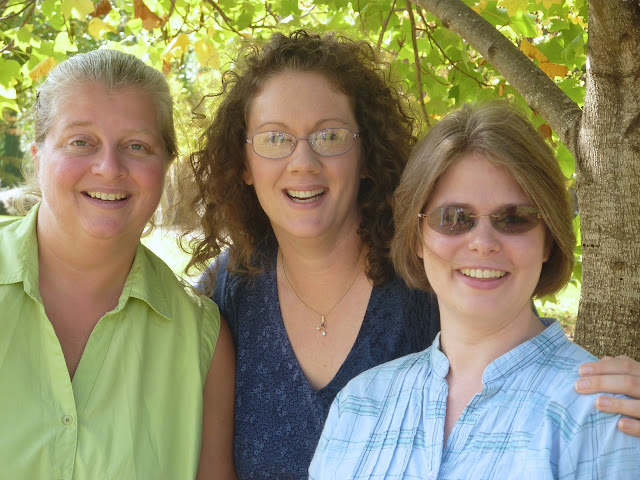 Time for one last picnic
at a park next to the school
(which you can see through the trees). 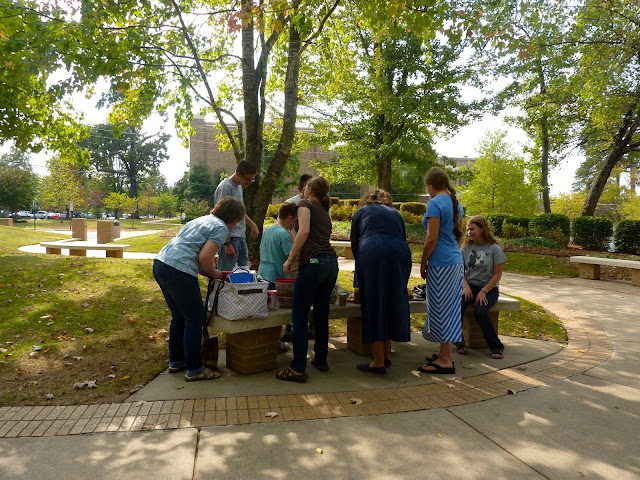 We sure loved Sarah's home-made bread! 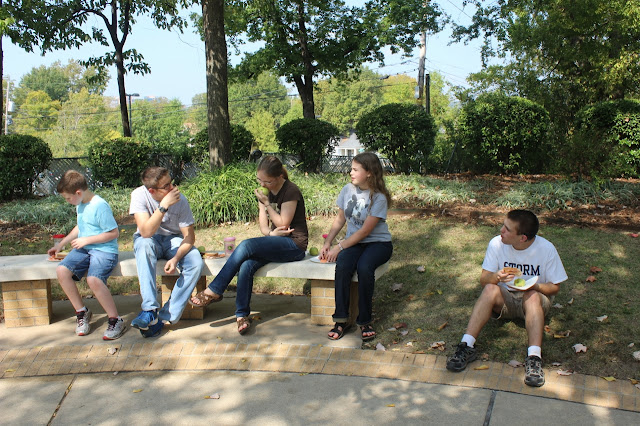 All too soon we were saying our good-byes at the Little Rock airport. 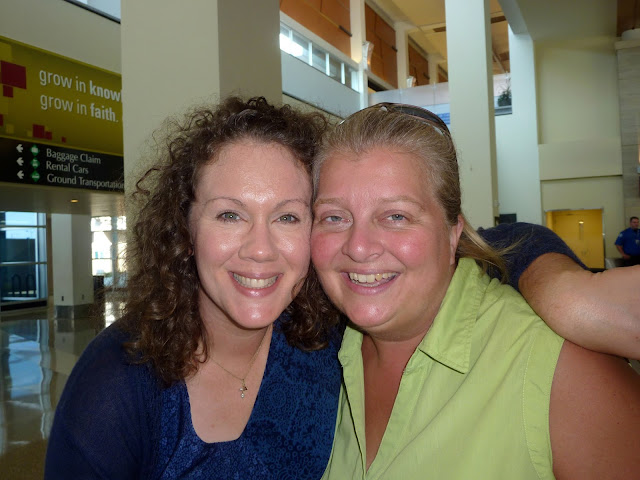 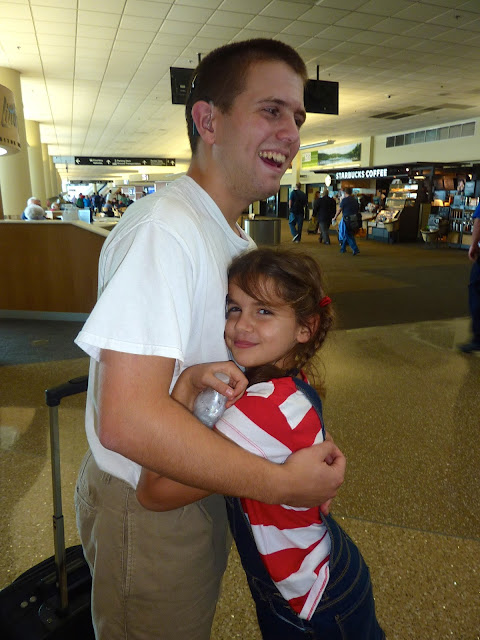 Though they offered to stay with us,
we guessed the Choates might be ready for some family time
without any extras,
so we headed off through security.

So glad to have a travel-buddy with me! 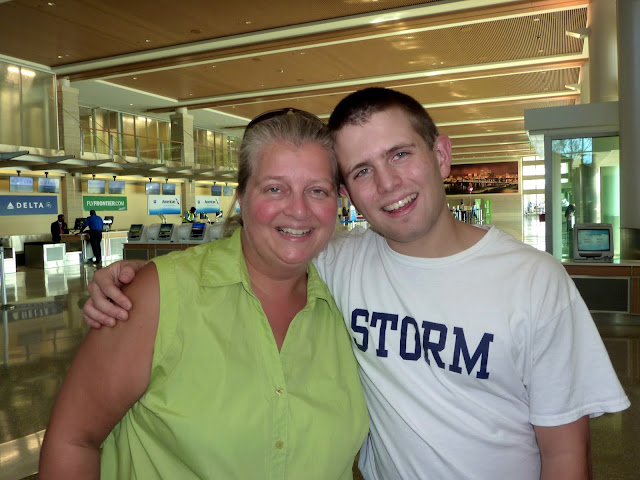 After our "little adventure" coming through Dallas,
Tate and I were looking forward to a calmer layover in Houston,
with an hour and fifteen minutes to transition to our next flight.
Because that works, right?
And there might even be time to grab a bite of dinner, right?

Until life happens.
See our plane?
See it sitting there, with no one getting on?
That's because it was
delayed a half hour for mechanical difficulties. 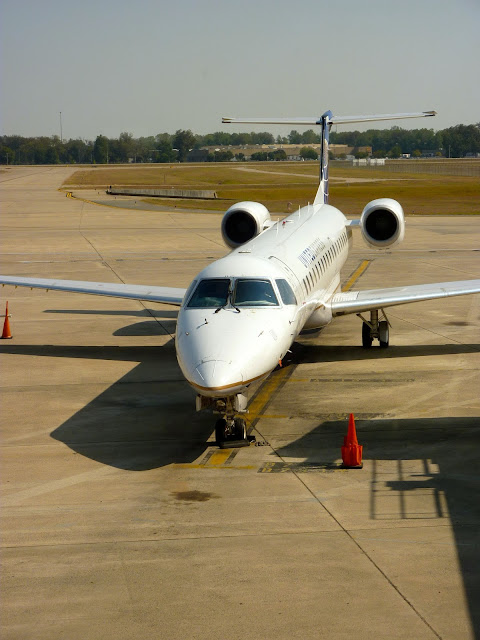 Here we are,
happy to be ON IT and MOVING toward home,
albeit unsure about our next connection... 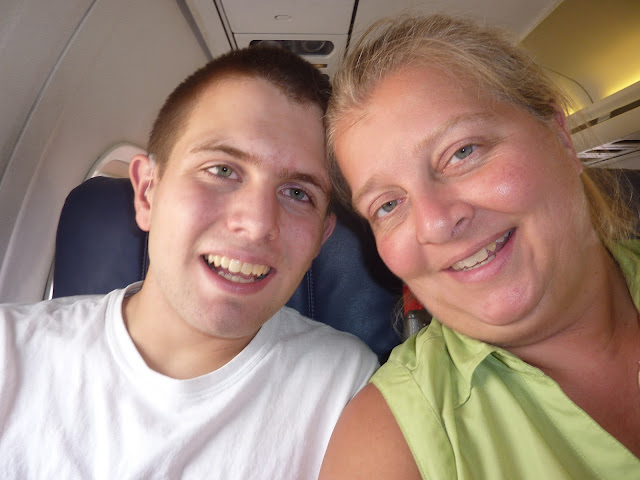 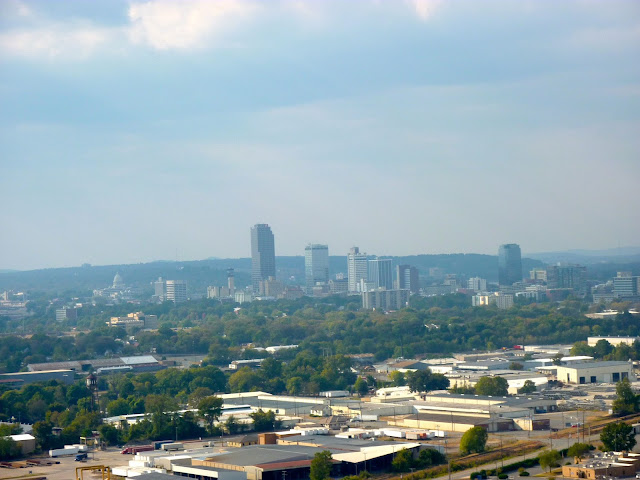 I don't know that I've ever seen a hotel right in the middle of a huge airport.
You'd think the rooms would be noisy. 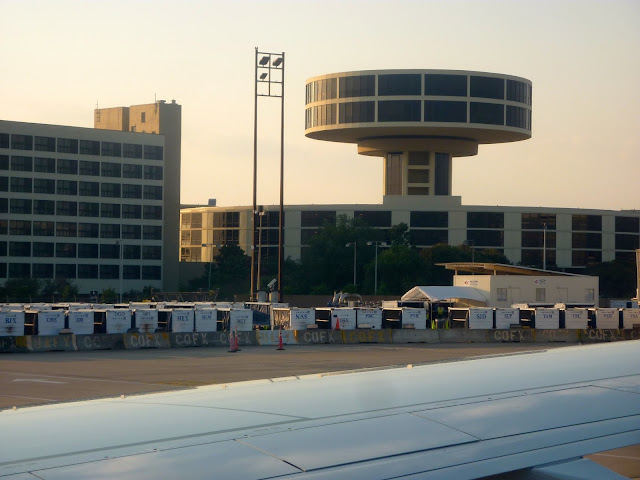 But really, Houston was just another blur,
because planes that take off a half hour late
tend to land a half hour late,
making our planned hour and fifteen minute layover...
not so much.

So, yes, our frantic dash through the Houston airport was
just as relaxing as you might imagine it to be.

But here is a happy sight:
the inside of the airplane that took us to Seattle. 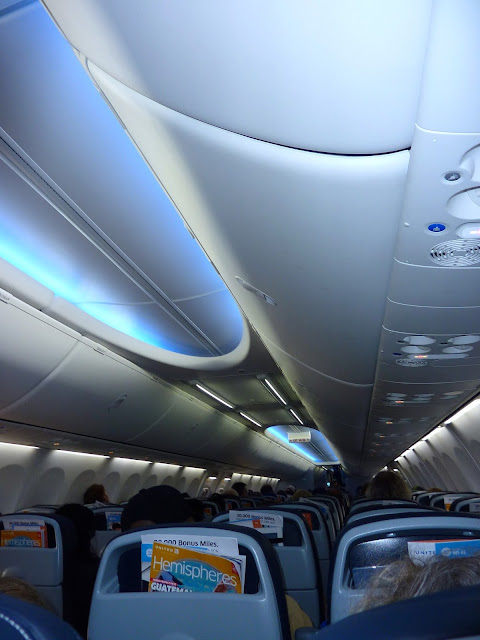 Aaaaand, once again we were the very last people on the flight.


This shot of the airport (because isn't that what you're all dying to see?)
serves to remind me how far we had to run.
Because Tate or I could point to the gate where we landed,
and the gate where we took off from,
and the multiple terminals we raced through.

I need to remember so I don't make the same mistake again! 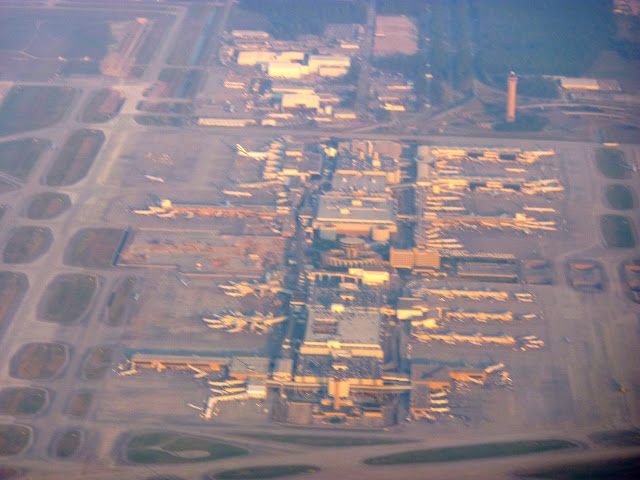 All that aside,
Tate and I had a fabulous time.
We made wonderful new friends
and had fun adventures.

One last gorgeous shot out the window,
compliments of Tate.
I think I can see the curvature of the earth. 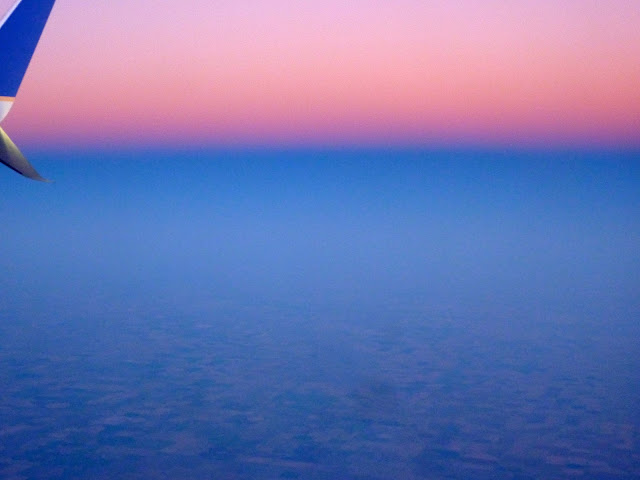 Then take me home, and put me to bed :D

The End
Posted by Herding Grasshoppers at 8:13 AM

Thanks again for being willing to come try something new with us! Glad you are enjoying being home again and praying God refreshes you before your next big adventure :-)

Yes, thank you so much for coming and making us a part of your October. It brightened ours more than we can express!