Christmas Breakfast, Or Any Time ;D 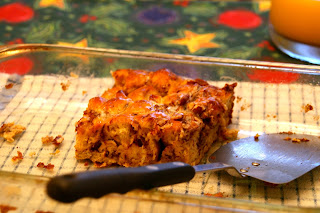 Oh my.  It was good.  Something online caught my eye, and I ended up combining a couple of recipes to get this:

2 Cans of Cinnamon Rolls - cut each roll into six or eight pieces.  Save the little cans of frosting for later.

When the butter is melted and starting to brown, take the casserole out of the oven and pour in the pieces of cinnamon rolls.  I stirred them gently to spread the butter all over them.

Pour the egg mixture over the top.  I added

1 C chopped pecans   but nuts are optional.  The boys aren't crazy about them, so I clustered them at one end - more for me!

Warm the frosting cup for a few seconds in the microwave, and drizzle it over the top.  I only used one of the two cups because I didn't want it too sweet.

Serve with syrup.  And we like the sausage links on the side - love that mix of sweet and savory :D

This was SO EASY.  If I was ambitious, I could have made my own cinnamon roll dough the night before, and I may try that sometime.  But for a Christmas morning breakfast?  Easy prep, not much clean-up, and quick!  Win-win!
Posted by Herding Grasshoppers at 10:14 AM

This sounds awesome. My boys like to sprinkle the cinnamon stuff in the dough so we'd keep making our own of that but I'm definitely going to try the rest of it. I wonder if you could prep everything in the pan the night before? Think it would get too soggy?

It might get too soggy if you mixed it all together, but you could cut up the cinnamon rolls and ziplock them, and pre-mix the liquid/eggs so it's all ready to go. It's really pretty quick to put together, though, once you have the cinnamon roll dough :D