Lots of things swirling around and not much time for blogging :D

1.  Summer?  Well, we've had a few sunny days, but not too hot.  Fine with me :D  Actually, with all the work we've been doing, cool and breezy is JUST FINE, thank-you-very-much.

2.  Yesterday my sister came home from five weeks in Italy.  We met her at the airport yesterday afternoon.  We've been checking on her house and keeping her lawn mowed, and enjoying her occasional updates with pictures.  Jealous?  Just a little ;D

3.  My mom is more than half-way through her radiation.  And she's doing great.  She's admitted to feeling more tired than usual, but I can hardly tell.  We encourage her to rest whenever she needs/wants.  And we're thanking God it's all going so well.

4.  We are making progress on The Tree.  (See post below.)  My dad recently bought a hydraulic wood splitter and oh-my-goodness, I don't know what we'd do without it.  The Tree was so gnarly and full of knots that it would be insane to think of splitting it all up conventionally.

5.  Tired?  Just a little.  In fact, making Rice Krispy Treats - which takes all of five minutes - to feed my hungry crew seemed a bit arduous.  But we may finish tomorrow.  Cue the Hallelujah Chorus.

6.  A word to the wise...  when your boys have picked a movie, as a reward for their hard work, and they want you and Dad to watch with  them, don't say, "Oh, honey, you'll like it - it's really cute."  Fifteen-year-olds don't like their movies called "cute".  But they'll watch them, just the same :D  (Tonight's choice is Despicable Me.)

7.  If you want a steady stream of looky-lous driving by your house, just cut down a Very Large Tree.  I guess most city-folk have never seen that done.  And I must say it's rather impressive, although virtually everybody overestimates how old the tree was.  And, for the record, the tree was about the same age as my mom - 65, and she wouldn't mind me saying :D

She has a picture of herself as a toddler, next to the tree, and they're about the same size.  A couple of weeks ago? 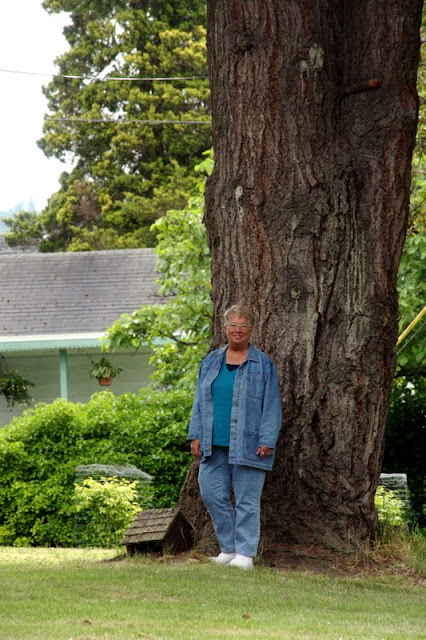 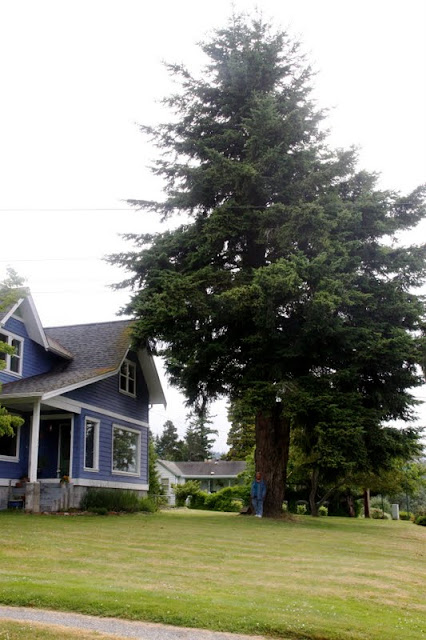 8.  Gunnar has discovered Hank the Cowdog, and is LOVING the books.  I think Tate is reading too.

9.  Best moment of the day?  After releasing the boys from working on The Tree to go play, my uncle pulled up.  All three boys immediately jumped off their bikes, grabbed their gloves, and loaded his pick-up full of wood, without me twisting their arms.  Yay :D
Posted by Herding Grasshoppers at 6:58 PM

Five weeks in Italy sounds glorious!!!
We all enjoyed 'Despicable Me' - did you?
Glad all is going well with your mom, she sounds like a brave woman.
Take care,
Felicity

5 weeks in Italy sounds amazing - I bet the pictures are wonderful, too!

We've had a few Very Big Trees get cut down in our neighborhood, and all the kids gather to watch the event. It is better than fireworks for 5 year old boys!

I'll have to keep a mental note of Hank the Cowdog for future reference. Matt just discovered the Magic Treehouse series, and we are reading those like crazy!

I've gotten so behind in reading your blog! Wow - you and your family have been incredibly busy.

Keeping you all in prayer,
God bless & Godspeed!

Felicity - yah, I enjoyed Despicable Me too :D The "evil villains" don't really hurt anyone, and it's nice watching Gru's heart change toward the little girls.

Leah - I bet they'd like Hank :D The author is a Texan and the books are very western.

Mrs. Squirrel - good to see you back!

We have had an endless parade of 16-20 year olds hanging out here all summer and 'Despicable Me' and 'Megamind' have been watched countless times... They seem to be the favorites...

I remember my mom being tired too. Five weeks in Italy? Wow! I would just be a tad jealous too.

I hope you're able to have a relaxing weekend after all that hard work.