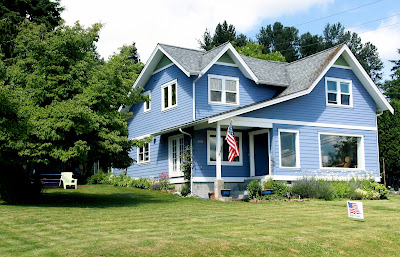 Outside my window...  a whole lot of daylight.  Yesterday was the longest day of the year - the solstice (and I'm using that word in the astronomical sense, not some airy-fairy mystical thing, y'know?)  That means we had over seventeen and a half hours of daylight.  No kidding.

Pondering...  I just don't know how to feel about the fact that I'm actually hoping for rain.  Because that makes no sense at all to a mossy, rust-covered western-Washingtonian.

Praying...  Wyatt has a job interview tomorrow with UPS.  We're very hopeful that he'll get hired back on, and praying to that end.  He's housesitting right now (has been for over a week and doesn't finish until Sunday) and it just doesn't seem right not having him here.  Though I've noticed he does show up pretty regularly for meals ;D

Thankful...  for my big, crazy family and the times we spend together :D

Going...  well, I want to go visit some friends in Arkansas, but I'm having trouble reconciling myself to flying into "Bill and Hillary Clinton Airport".  Errrrgh.  That just seems wrong.

Reading...  the Miss Julia books.  Have you ever?  Miss Julia is "a southern lady of a certain age" that finds herself in all kinds of situations you wouldn't expect.  I just love the author's voice.  In one episode, Miss Julia is trying (successfully, of course) to coax a charitable donation out of an eccentric old coot.

"Hah!" he yelled, springing back in the chair again,
his legs spraddled out so that one slipper went flying,
landing on Ronnie, who passed gas in surprise.

I ignored the faux pas,
as any well-bred lady would under the circumstances.
Lillian looked as if she were about to pass out,
but then she was closer to the dog.

Looking forward to...  all the projects I imagine I'll get done with All The Free Time over summer break.  (Why does that never work out the way I think it will?)

In the kitchen...  I have no idea, yet, but BBQing is always a good option ;D

In the learning rooms...  we are done, done, done, so very done.  But I need to do my yearly wrap-up, so I remember what we actually did.  Coming soon...

Around the house...  this is the summer we're finally going to fix the living room window.  The new window (actually, it's three windows, because The Code) is/are ordered, and then chaos will ensue.  We'll have to remove the old one, which is huge, build up some new framing (the bottom of the new window/s will be higher), put the new one in, add new siding, trim, finish off the inside, etc.  You know, while we're living in the house.

And you know all these sunny days I've been talking about?  My cynical side wonders if we're going to get back all the rain we've been missing about the time we tear the house open.

The Mother Load...
* document this school year
* plan next school year
* find out what Tate's schedule is next year
(so I can plan what he'll do at home...)
* help Wyatt apply for insurance in his own name because he'll be 19
* go through the annual exercise of showing our eligibility for insurance, once again
(because oh-the-joys-of-being-self-employed)
* write Tate's transcript
* order Gunnar's end-of-year jump-through-the-hoops test
* have him take the end-of-year jump-through-the-hoops test
* post several items on craigslist
* make the boys clean out the garden shed
* get Kerry and the boys to clean out the garage
(that, or call Hoarders)
* sort/photograph the boys' school "save boxes"
(what to really save and what to document in digital photos because nobody will probably ever care)
* clean and organize the family room closet - where the "save boxes" are
* get photos of Zodiac trip from Tate's teacher
* start (semi-secret) sewing project
* reschedule two dentist appointments and a mammogram
*weed the flowerbeds around the house (not excited)
* replant not-exactly-thriving bushes from pots into ground
* plant beautiful blue delphinium Kerry got me and somehow protect it from the long-legged-rats (aka deer) 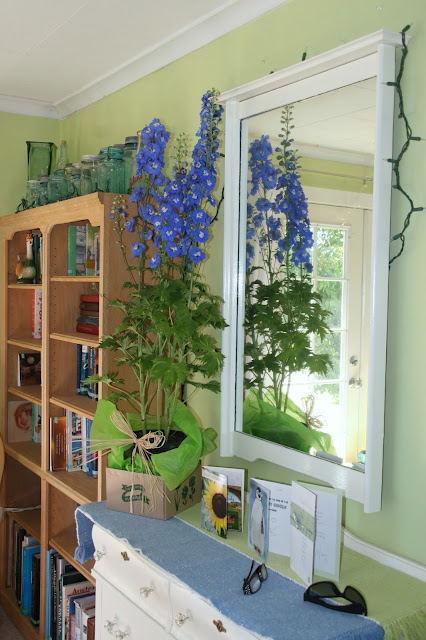 It's just more fun than a barrel of monkeys around here.

Something funny to share...  Kerry (who may or may not listen to too much talk radio during the day) has adopted a "the sky is falling" mindset and has been saving things in the garage.  Yesterday he (jokingly?) accused the boys and me of hiding the dryer lint from him - disposing of it where he couldn't find it.

Um, did you notice I've been drying the laundry on the line for a couple of months now?

One of my favorite things...  ice cream, and more ice cream.

A peek into my world...  snoozing on a branch, right out my window, with his tail blowing in the breeze... 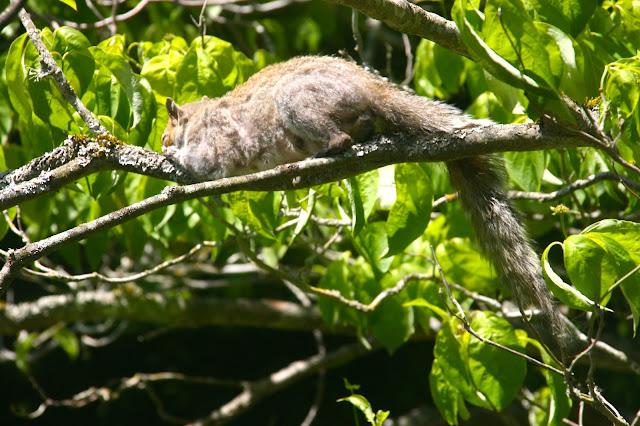 Posted by Herding Grasshoppers at 9:00 AM

Wow! What a Mother Load! We have to replace our hardboard siding on the house next spring. Seems that under the shutters we put on next to the windows (where you attach them)is rotting! {{sigh}} and you think you are going with a siding that will last all your life time. Oh gee, can't wait to get started on that! :I
Will keep Wyatt in my prayers for that job. It's a good one! Hope you do have some enjoyable summer days though... We love to BBQ around here until the temperatures drive us inside!
I put a bar of soap in my garden to keep the deer away. Wonder if you could discreetly hang a bar in your new bush/tree. It's beautiful and that would stink if they ate it up!

But laughing quietly about the sky is falling mindset...

I was actually wondering if you might NEED some rain after you said it has been an unusually sunny June so far.

I'm laughing so hard at the Clinton airport comment! It's even funnier considering just yesterday Joanna and I were discussing a field trip to the Clinton library (trying to find all of the indoor activities we can do together while it's so hot!).

Of course, the lovely Memphis airport is only two hours away...