1. The best news of the week:  We're done with homeschool for the year!  WOO-HOO! 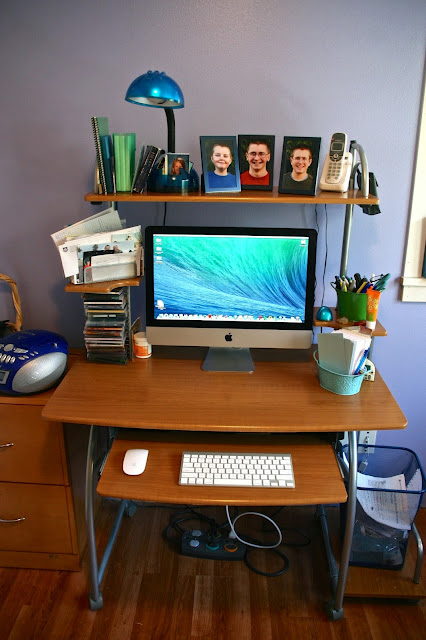 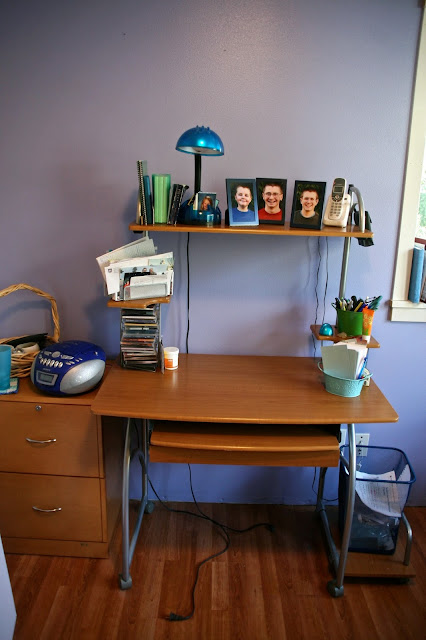 I have no idea.  Fan?  Hard  drive?  Whatever.  Three-year care plan to the rescue.  In the meantime, I'm reduced to using Kerry's computer in the brief moments that he's not, and let me just say that I like my keyboard a million times better.  I feel like I'm pounding in nails as I hit the keys on his.


3.  The good news is that removing distractions gives me more time to work on Naomi's birthday present - the doll house.  The painting is done (and there was much rejoicing), and now I'm working on the floors.  My grandparents had cut carpet samples, and oh-my-word if I could only show you the hideous glory of those 1970's carpets.  The fake orange bricks, the olive green shag, something brown… they were spectacular.  But moving on… I've chosen some scrapbook paper and mod-podged it down in the kitchen and bathroom, to look like linoleum.  It's really cute, if I do say so myself!  I bought a couple of place mats I'll cut down and hem for the living room and dining room.  And the bedrooms… I decided to mod-podge more scrapbook paper, but this time to cardboard that will fit the bedrooms, so we can change it up if we want.  Gunnar and I also looked through my scrap bag and have picked out some fun, bright fabrics to make curtains.  Not sure how that's going to go.  I may just pin them to the walls - again, removable.  It's kind of crazy.  Gunnar and I are having a lot of fun, but there's absolutely no way a three-year-old will have any idea how much work we've put into this.  Whew!


4.  Kerry, Wyatt and Tate have gone to the Deming Logging Show, aka "the logger-rodeo", your go-to place for sawing contests, log-rolling, speed climbing, (things you might be able to visualize), along with the more unique skills such as trailer backing, cable splicing, chain-saw or hot-saw or ma-and-pa bucking, and obstacle choker setting.  I'm intrigued by the last one.  What could the obstacles be?  Stinging nettles?  Spotted owls?  A hornets' nest?  I have no idea.


5.  Gunnar and I had to stay home, waiting for a friend to call, so I can take Gunnar over to practice handling his shotguns for Gunnar's Field Safety Skills Evaluation next week.  He's taking our state's gun safety course because he wants to hunt this fall.  I may need a bigger freezer ;D


6.  And speaking of Gunnar… the boys frequently share their dreams over breakfast.  And I don't mean their goals, I mean what they dreamed last night.  Though I frequently suspect them of embellishing, in a strange sort of competitive one-upmanship, well… dreams are strange.  According to Gunnar, last night he dreamed that the world was taken over by shrews, which eventually departed, leaving him living in a mansion and ruling Seattle.  Unfortunately, he was not a popular ruler.


7.  To make that even stranger… you know how cats will leave their owners disgusting little tokens of their affection on the doorstep?  We don't have a cat, but I think the crows may love us.  Guess what we found right outside the back door this very morning?  I'll give you a clue - it was dead.  Either a shrew or a mole.  Didn't look closely, just got rid of it.  But get this, it was not the first one.  I've found several dead ones, and often right out the back door.  No kidding.


8.  I know, I know.  Try to control your envy of my insanely glamorous life.  You'll have to use your imagination about what we're up to, as until my computer comes home I'll be incommunicado.  Good luck!
Posted by Herding Grasshoppers at 11:26 AM

It may even be a neighbor's cat... Mine leaves "gifts" on the door step of several neighbors. They are thrilled...

Oh, I love catching up with your blog! Getting a glimpse into your life brightens my day - yes, 70's shag and all! :)

Read this earlier but didn't comment... Do you have your 'puter back already?! yAy for you! :-)

Must have missed your last daybook however... Wow, what a project that window has become -- But just what all are you DOing in this project?? Eager to see more updates on that! {haha - 'pecked to death by chickens'}

And the doll house - that will be lovely when you and Gunnar are finished - so fun! Major Marvelous Aunt (and cousin) Award for sure.

I'd love to know what Gunnar has been reading lately! Something by Brian Jacques?