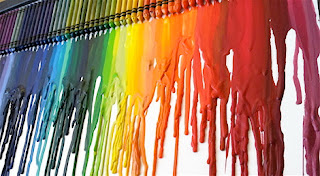 We can avoid educational labels.
One of my children was (ahem) suspended twice.  His first week of Grade 1 in a new school.  Yah.  Let me tell you that was a fun meeting with the principal.  (/sarcasm)  I was told that his behavior problems were obviously a result of my lack of discipline and consistency in parenting.  If that's what he said openly to my face, can you imagine what went in my son's school records?  And how fun it was for his brother, whose every behavior was interpreted in light of this?

I had the school psychologist (a very dangerous woman... ewww) tell me that Tate was disturbed and anti-social because he didn't play with all the (wild, under-supervised, uncontrolled) kids on the playground at recess, but sat by himself on the edge of the field.  My junior entomologist came home excited to tell me about the ant hill he'd discovered, and how the ants had carried the pupae away quickly when he stirred the nest.  Yah.  Seriously disturbed.

She also took his annual testing upon herself one year, when the ToD was on a personal leave of absence, and proceeded to administer tests that were completely inappropriate for a hearing impaired child.  Even when I pointed this out to her, she persisted.  You can imagine how his test results looked.

On the other hand, Tate was a late reader and he still finds writing difficult.  Frankly, his spelling is still, um... not fabulous.  And it may never be great.  I choose to roll with it.  Yes, we work on it, but I don't make a big deal about it because, frankly, he's so smart in other ways!  If I harped on his spelling and spent a ton of time on it, it probably wouldn't help and would likely hinder and discourage him.  He's my hardest working, most resourceful student.  When we study history he finds resources for me that make everything more fun and interesting.  When we study science, he catches whatever I need for our experiments (reptiles, insects, arachnids, etc.)

He is not defined by an educational label.

And it's not just Tate.  Wyatt has some pretty significant problems with his attention span, and staying focused on his work.  Imagine how much harder that would be in a room with 30 other kids!  He prefers to do his work either alone in his room (desk facing a wall), or talking it through with me.

Fine.
Posted by Herding Grasshoppers at 5:08 AM

My kids were never in a school, so I'll never know what kind of labels they might have been given! And I'm sure my one son (who lives on another planet) may have been given several...
Hooray for home education!!

I don't think Olivia would learn a thing in a classroom. She would get in trouble for talking, she would never finish her work on time, and we would be told that she needs medication for ADD.

That may be one of the most important points - kids get labeled so easily in school. We are fortunate that Nolan has a great teacher, but I could see other teachers putting him under a microscope that would unfairly label him. Each kid is an individual, and doesn't need any stereotypical label!

Aaaaaamen! Your early experiences with the school system give me shivers. EW!! I can't say we've experienced the same. So far I am very impressed with the quality of teaching in my kids' Christian school, but I also choose not to be naive and think that their school is perfect. The only perfect school is homeschool ;o). I only say that because we can tailor exactly to our children's needs.