On The Road Again... A Tate Update

He amazes me time after time.

I've mentioned that he's healed up just fine from the surgery.  Better than fine.

The most likely side-effect of CI surgery is dizziness, which makes sense as they're poking around in your inner ear (hello vestibular disturbance).  If Tate hadn't told me he'd felt it a little, I'd never have known.  In Tate's world, "dizziness" translates to "for the first day or two after surgery, I couldn't just vault out of bed, but had to sit up, wait a second or two, and then stand".  Gee.  I'm (happily) underwhelmed.

Also, he came home with tylenol, double-strength ibuprofen, and "real" pain meds.  Which he took twice, with my encouragement, before going to bed.  Any time I'd ask him about pain he'd have to stop whatever he was doing and really think about it.  On a scale of one to ten... one, or maybe two.

And the actual incision?  I showed you a pic just shortly after surgery (HERE, if you're interested).  and now?  Practically invisible.  If a bit of the skin looks kind of yellowish, that's probably what's left of the glue. 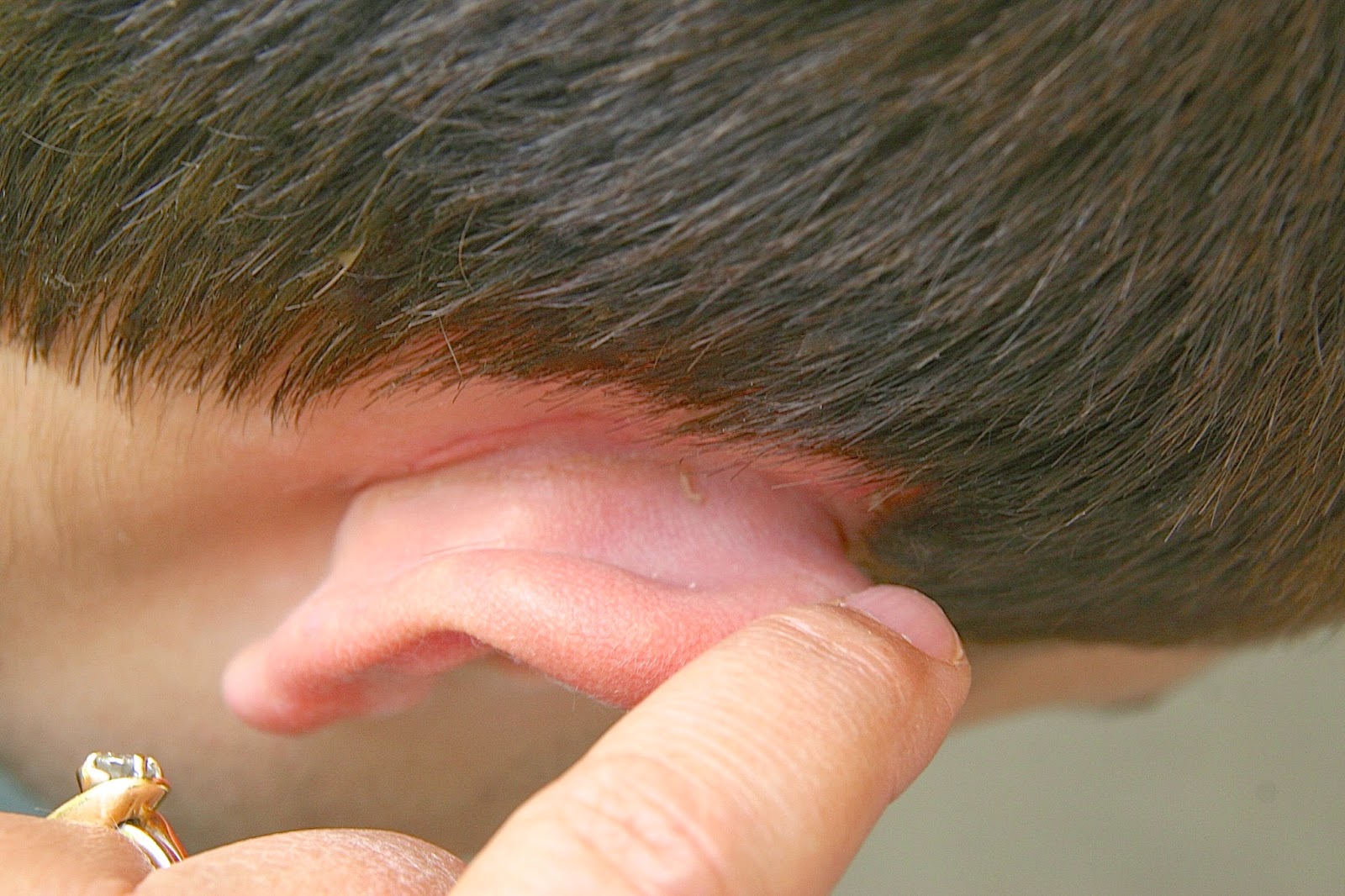 With healing accomplished, we headed back down to Children's for Tate's post-op.  We really like Tate's surgeon - David Horn.  I know, I must be getting old, because he looks like he just graduated high school, but that's no reflection on his knowledge or skills, which are fabulous.  And he explains everything so that we can understand it, without being condescending or childish.  Awesome. 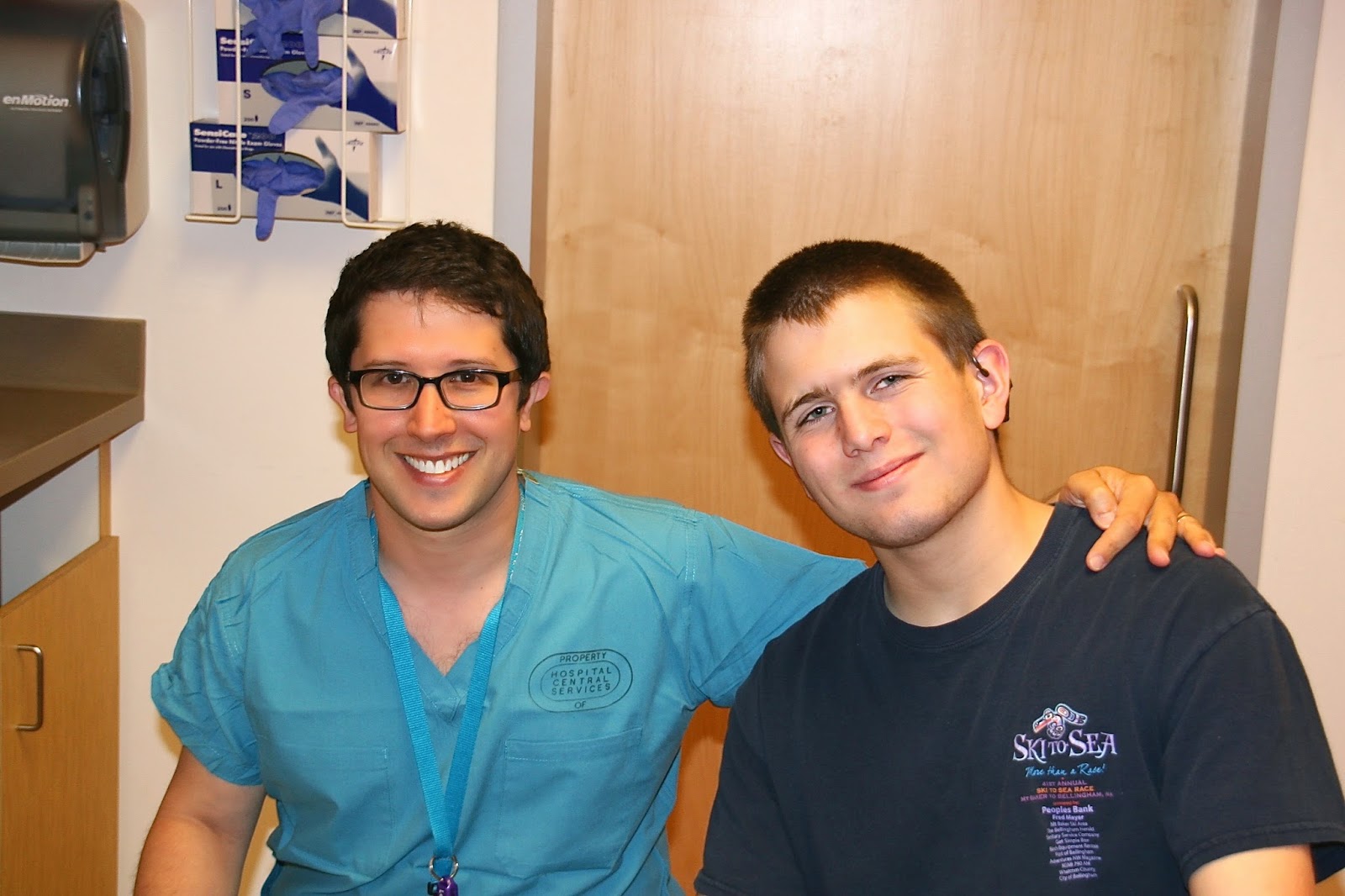 He checked the incision, asked about dizziness, and checked Tate's facial expressions.  (Too bad I didn't get a pic of THAT!)  Another possible side-effect can be nerve damage, but Tate's face is still nicely symmetrical and functioning normally :D  That appointment took all of about five minutes, and Tate was cleared to proceed to his audiologist for activation. 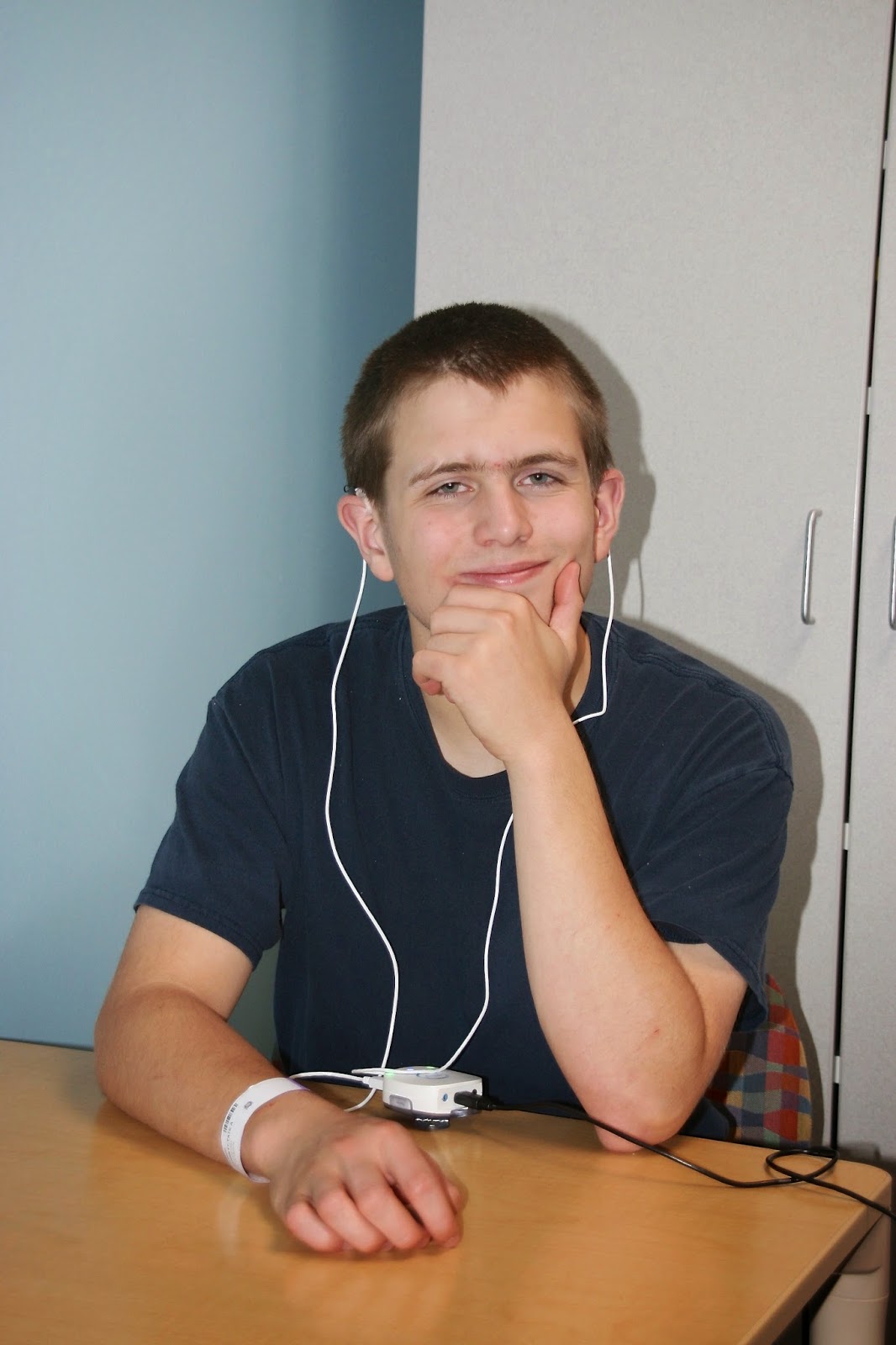 Guess who else we really like?  Tate's audiologist, Kerri Corkrum.  Okay, I caught her at a funny moment - she's totally adorable - she was undoubtedly explaining something.  Because I'll tell you what, learning about all this new technology is kind of like drinking from a fire hydrant.  And Kerri is so wonderful and patient about the whole thing.  She tells us how it works, shows us how it works, walks us through it, and is just great with Tate. 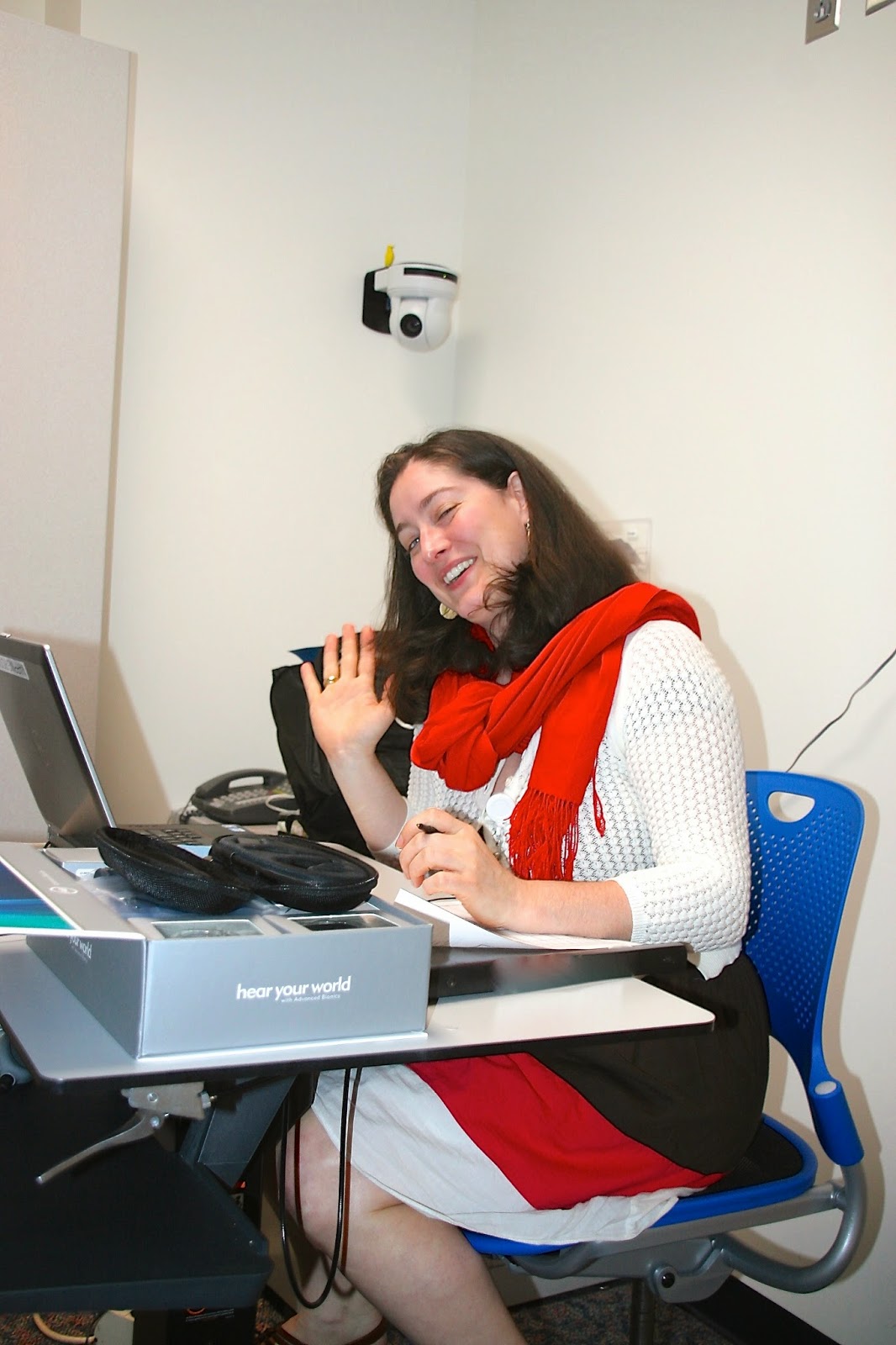 I think I mentioned there are sixteen electrodes.  I believe it's possible to tweak each one individually, but for now she programmed them in groups of four.  Tate has a little chart (probably really helpful for the littler ones) to indicate how the sound feels to him.  Because it doesn't just sound loud or quiet, it feels loud or quiet, too.  Those nerves haven't been stimulated for awhile, so we start low and slow, and gradually ramp up to more stimulation. 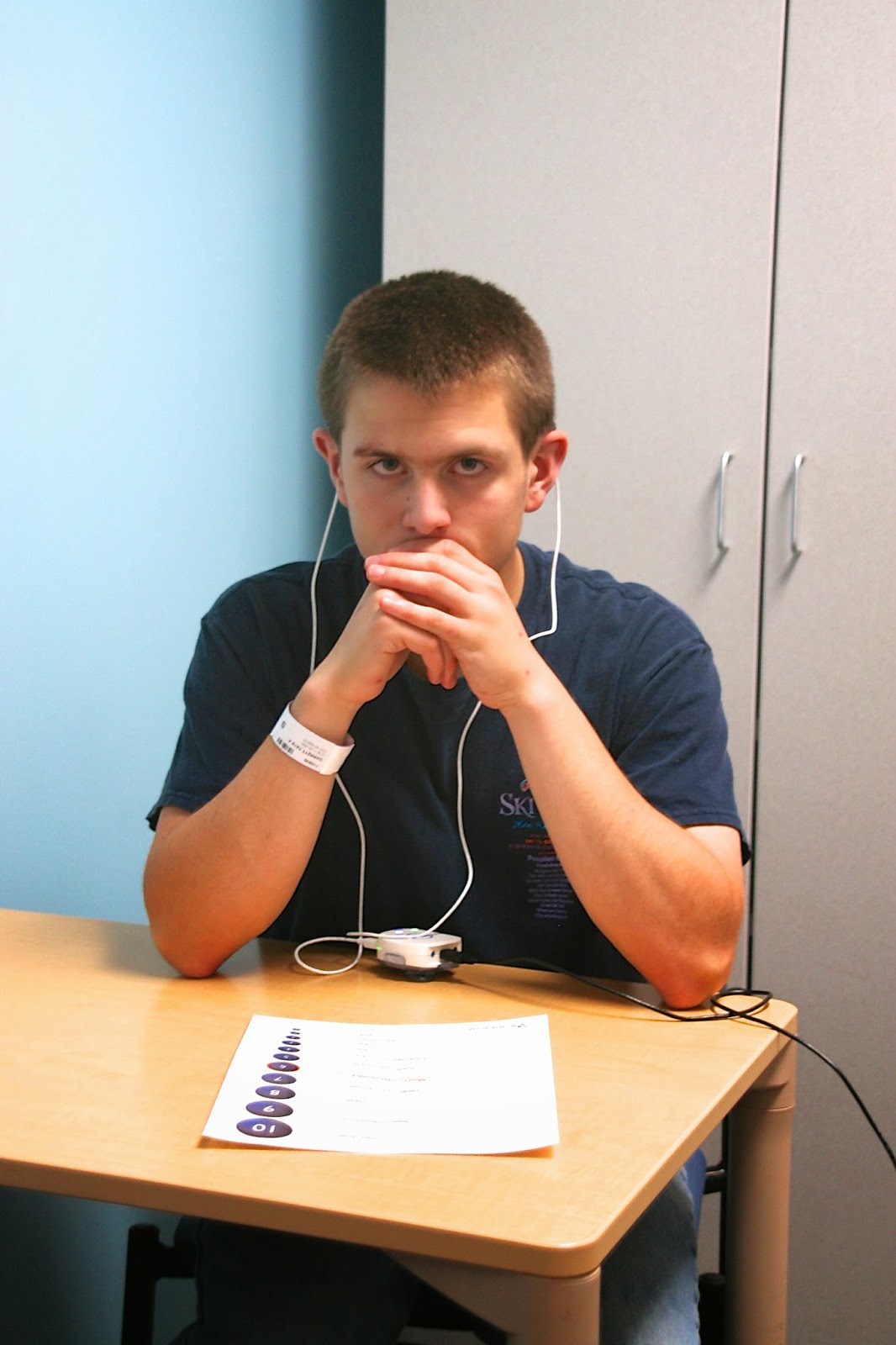 That's Tate's new Com-pilot he's holding, and they're discussing its many capabilities.  Amazing. 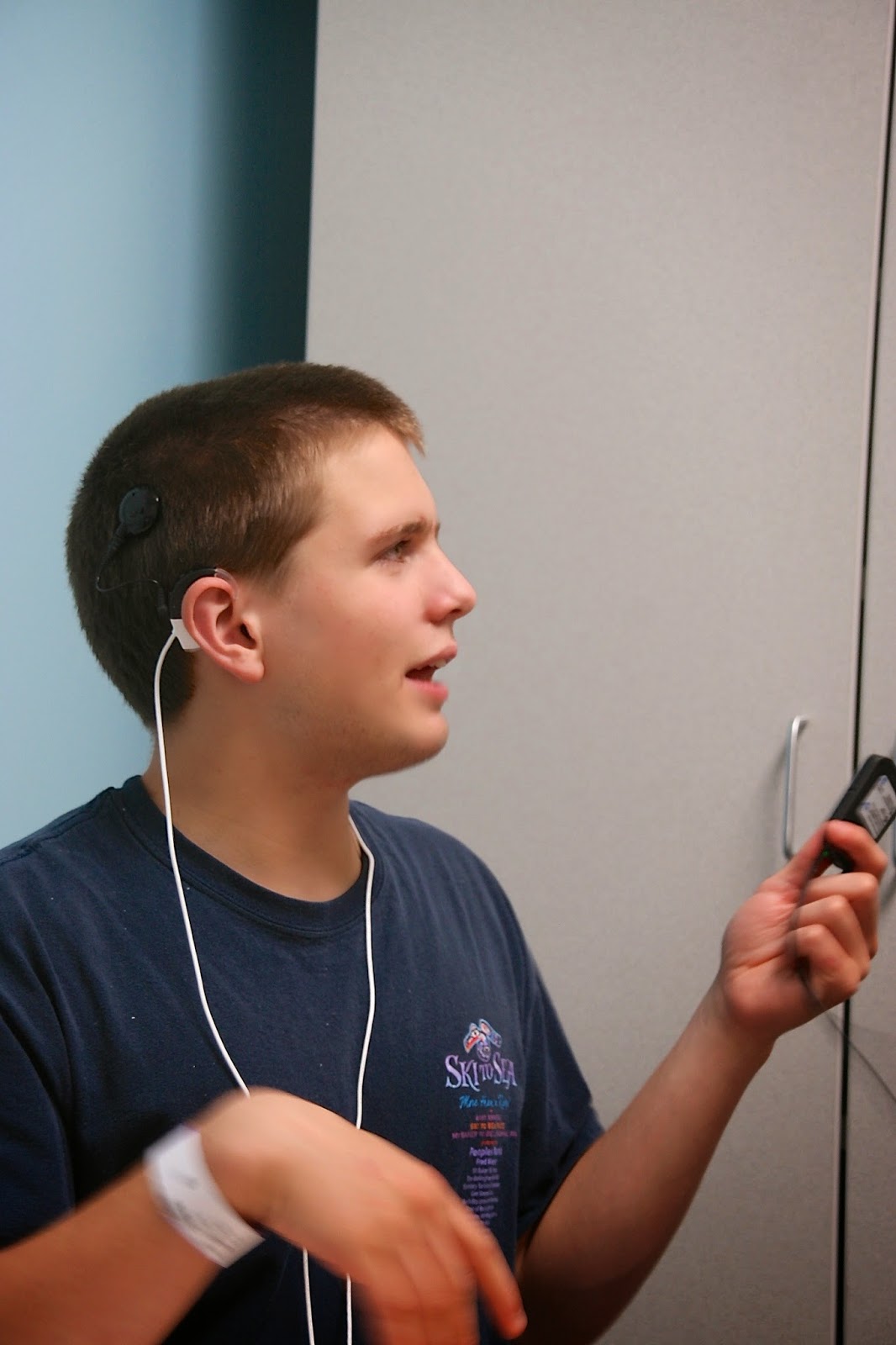 Kerri is a treasure.  Always upbeat and encouraging.  She notices things (like Tate wearing contacts now, instead of glasses) and really listens to questions and concerns. 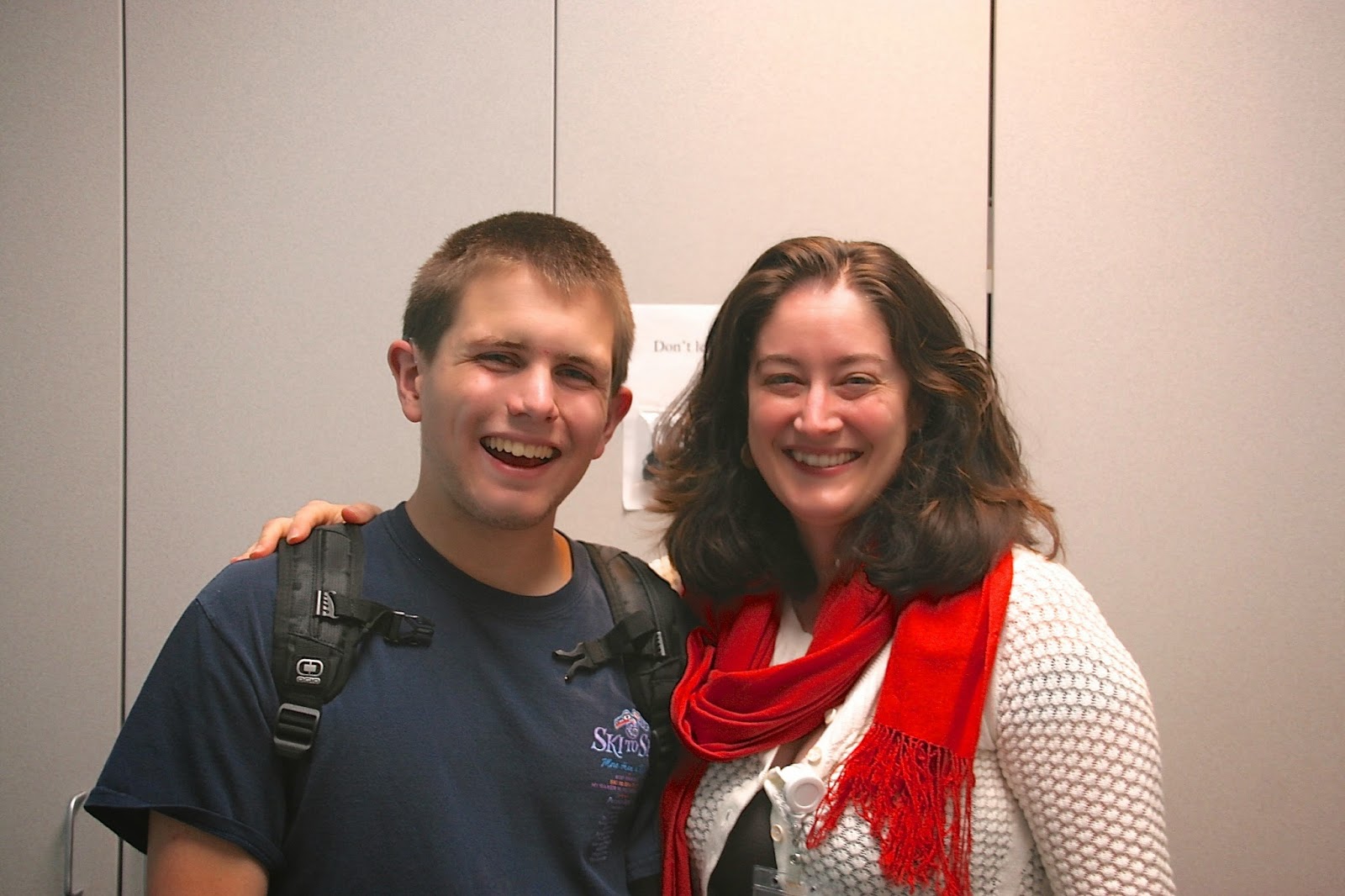 We like Dr. Horn - he also communicates well and treats Tate like the near-adult he is - but we have a lot more contact with Kerri.  Especially just now, when his appointments - his mappings - are so frequent.  As his nerves and brain adjust to the new input, his program will be tweaked continuously.  His activation was yesterday, we'll be down again tomorrow, and again next Tuesday, and so on.  Whew!   Good thing we like Kerri so much!

Reminds me of a verse from Psalm 16,


The boundary lines have fallen for me in pleasant places;
surely I have a delightful inheritance.

Posted by Herding Grasshoppers at 3:11 PM

technology is an amazing thing! And Tate is a very strong young man! So glad to hear things are going so well!

The technology is awesome -- and so much fun to accomplish most of it painlessly {relatively}, including the helpful visits with med staff!