In our county, Memorial Day Weekend is famous for a gigantic relay race called Ski-to-Sea.  Five hundred teams, each with eight members (there is no iron-man division) makes for a crazy amount of activity.  And loving crowds as I do (*ahem*), I was happy to let my brother and SIL join the mayhem while we had a Naomi visit, from Saturday until Monday.

Unlike my boys, she doesn't seem to like sitting still and being read to, but guess who she'll sit with? 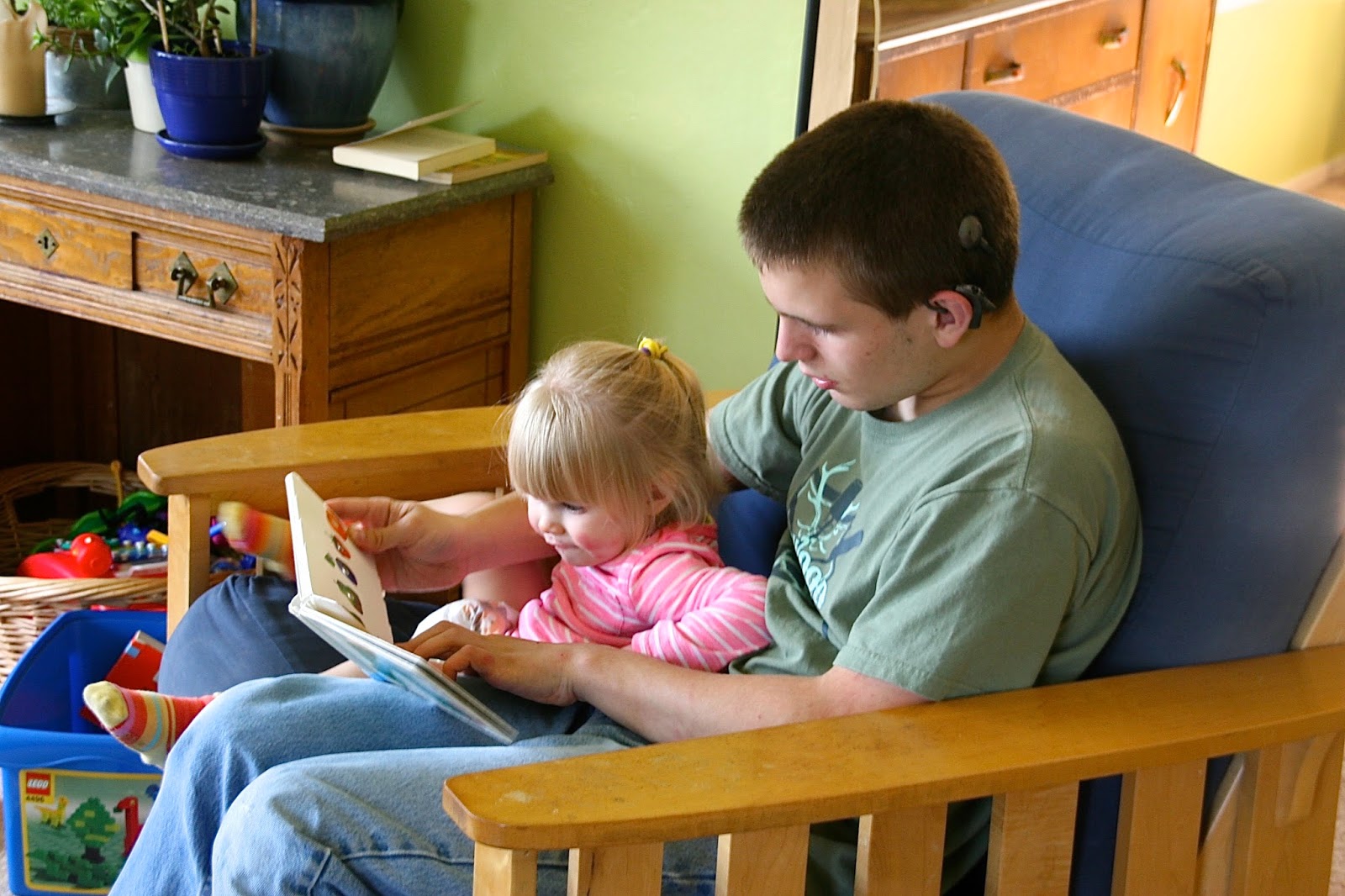 Though he doesn't dote on her quite like Gunnar does,
she willingly sits with him and listens to stories, like The Very Hungry Caterpillar.
And I love listening to the way he moderates his voice for her :D

Somehow I failed to get a pic of her with Wyatt.  She has a particular interest in Wyatt because he can sound so much like her dad. 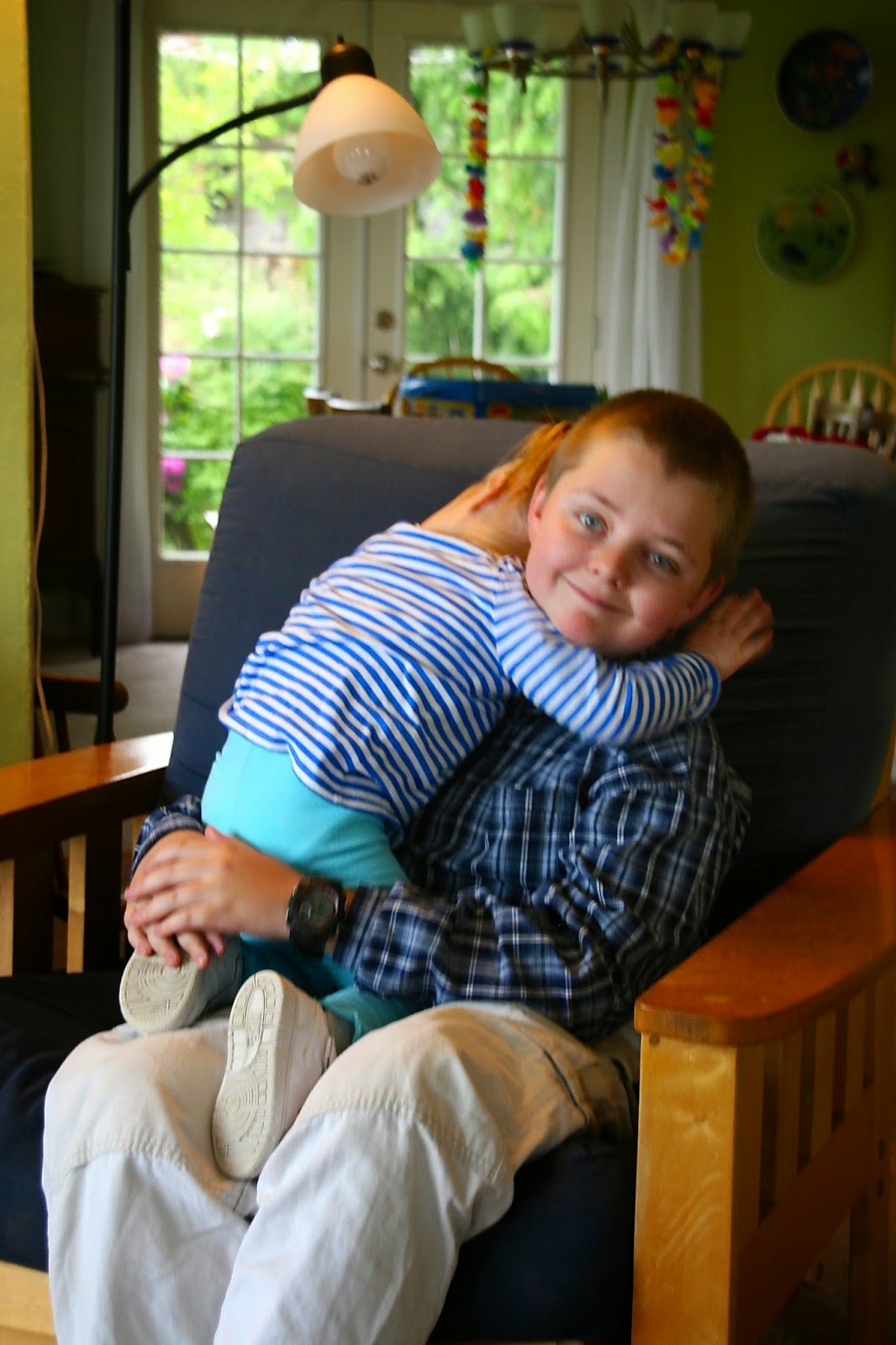 ... have a very special relationship :D 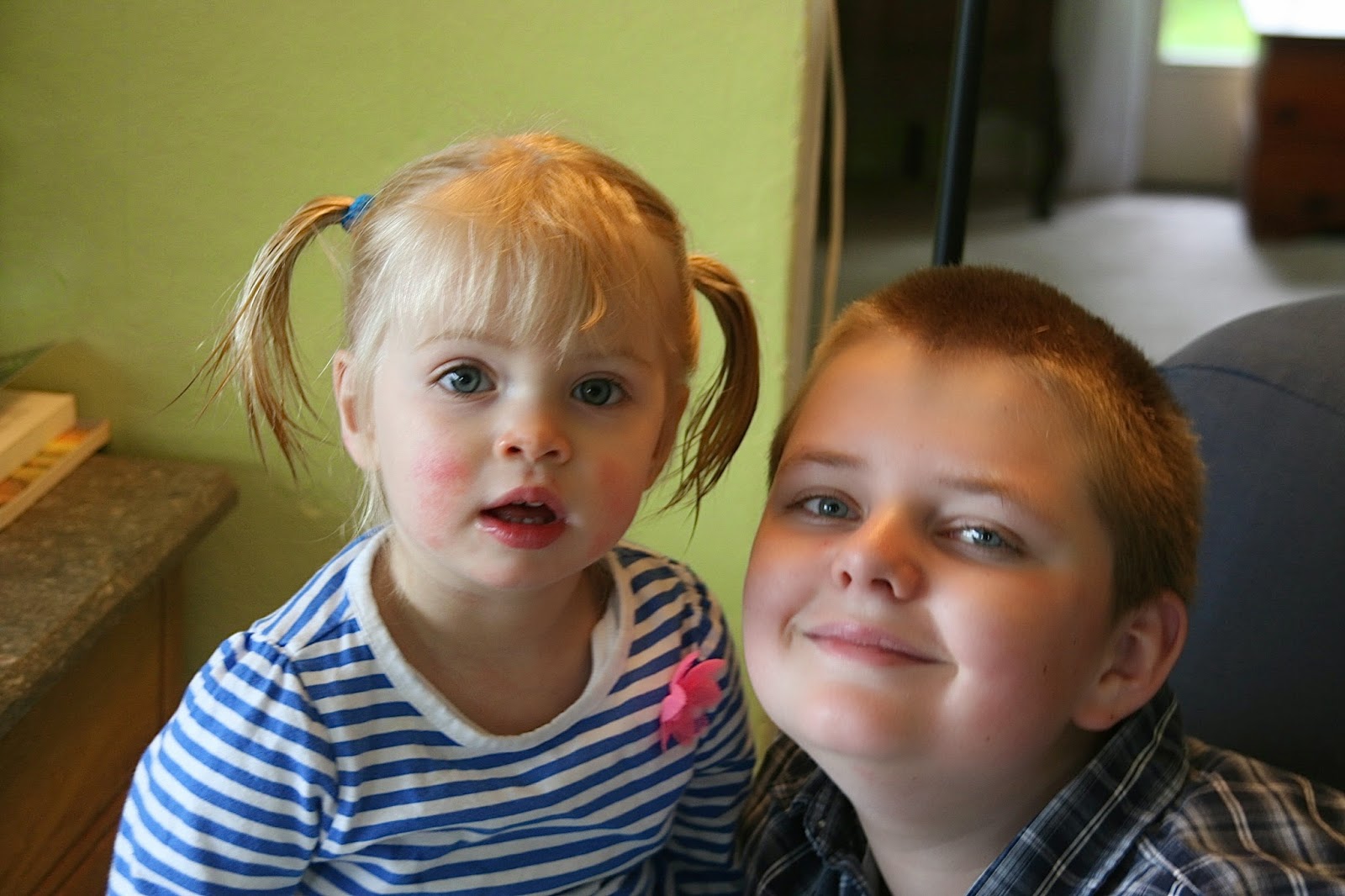 And Grandma.
Grandma is also occasionally allowed to read to her.
Briefly. Usually she does this with books.
Grandma noticed.
See how she's holding the book?
Like the daycare worker, so all the kids can see. 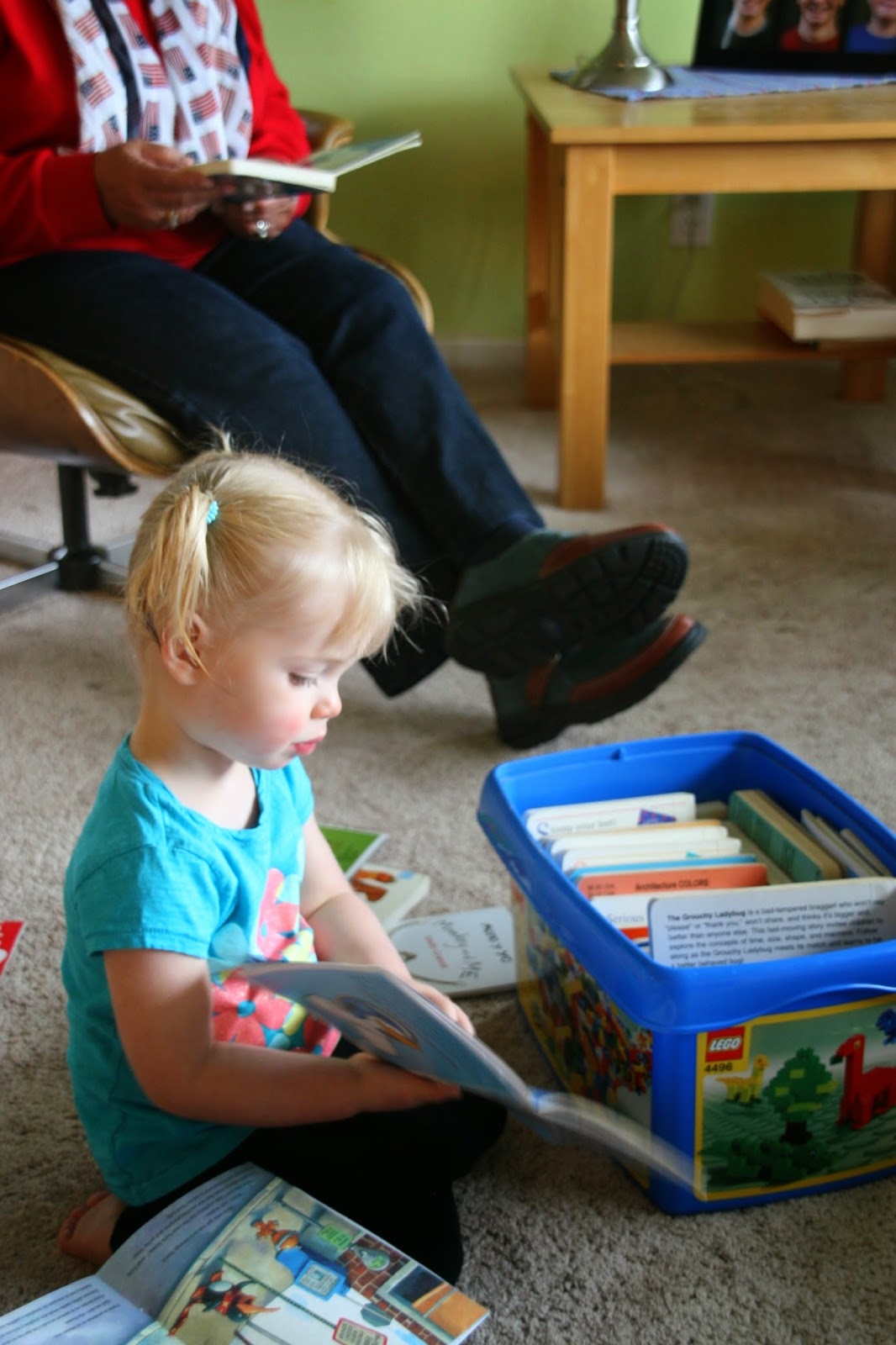 She loves goofing around with Gunnar.
Now it's about 50/50,
Guh-guh
or
GunNAR.
Heavy emphasis on the second syllable,
which she only adds sometimes.

But she can say it - very cute. 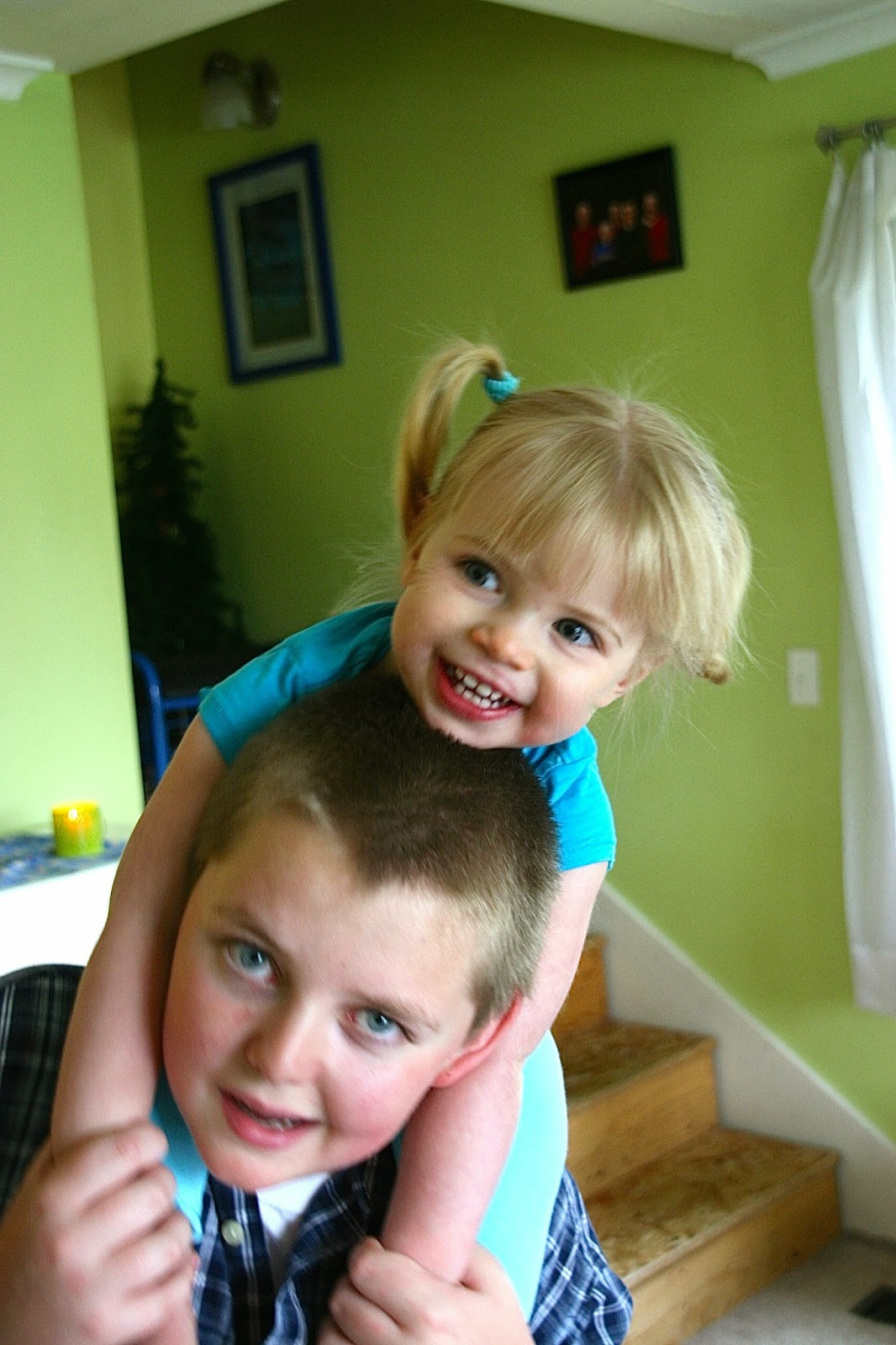 We had another performance on the stair/stage. 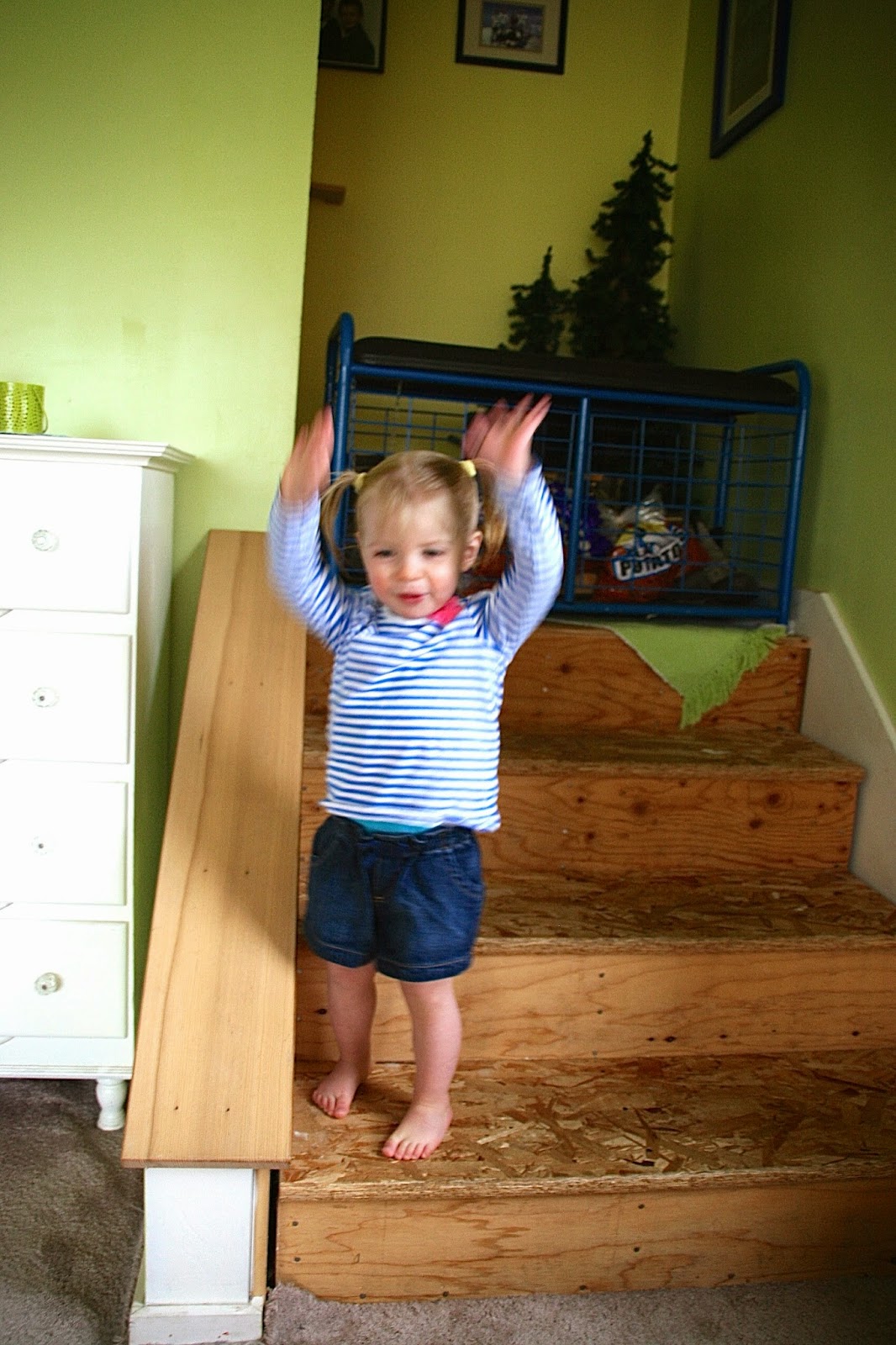 I think this was the Itsy-Bitsy-Spider. 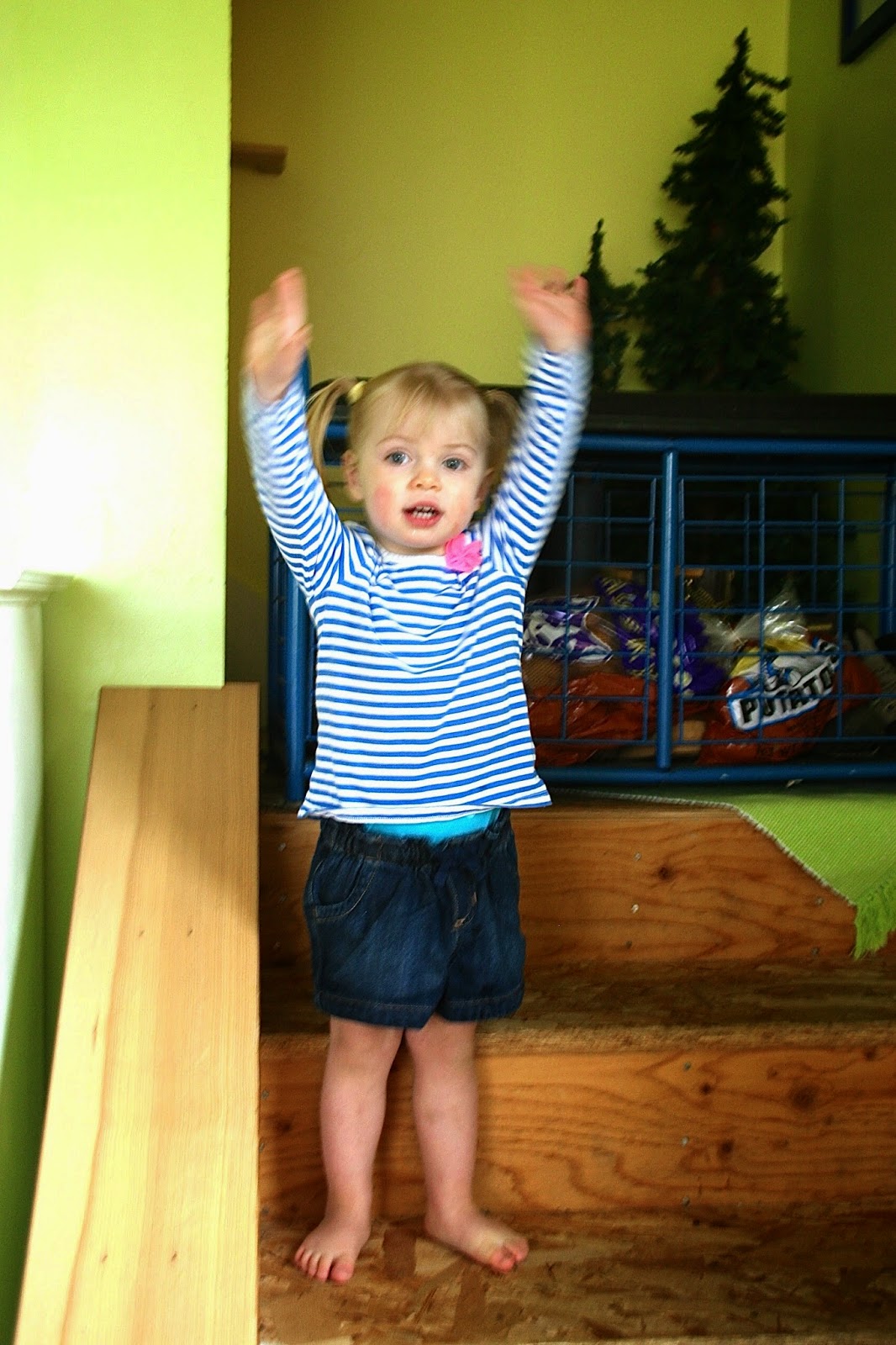 Possibly concluded with a
"How big is Naomi?" 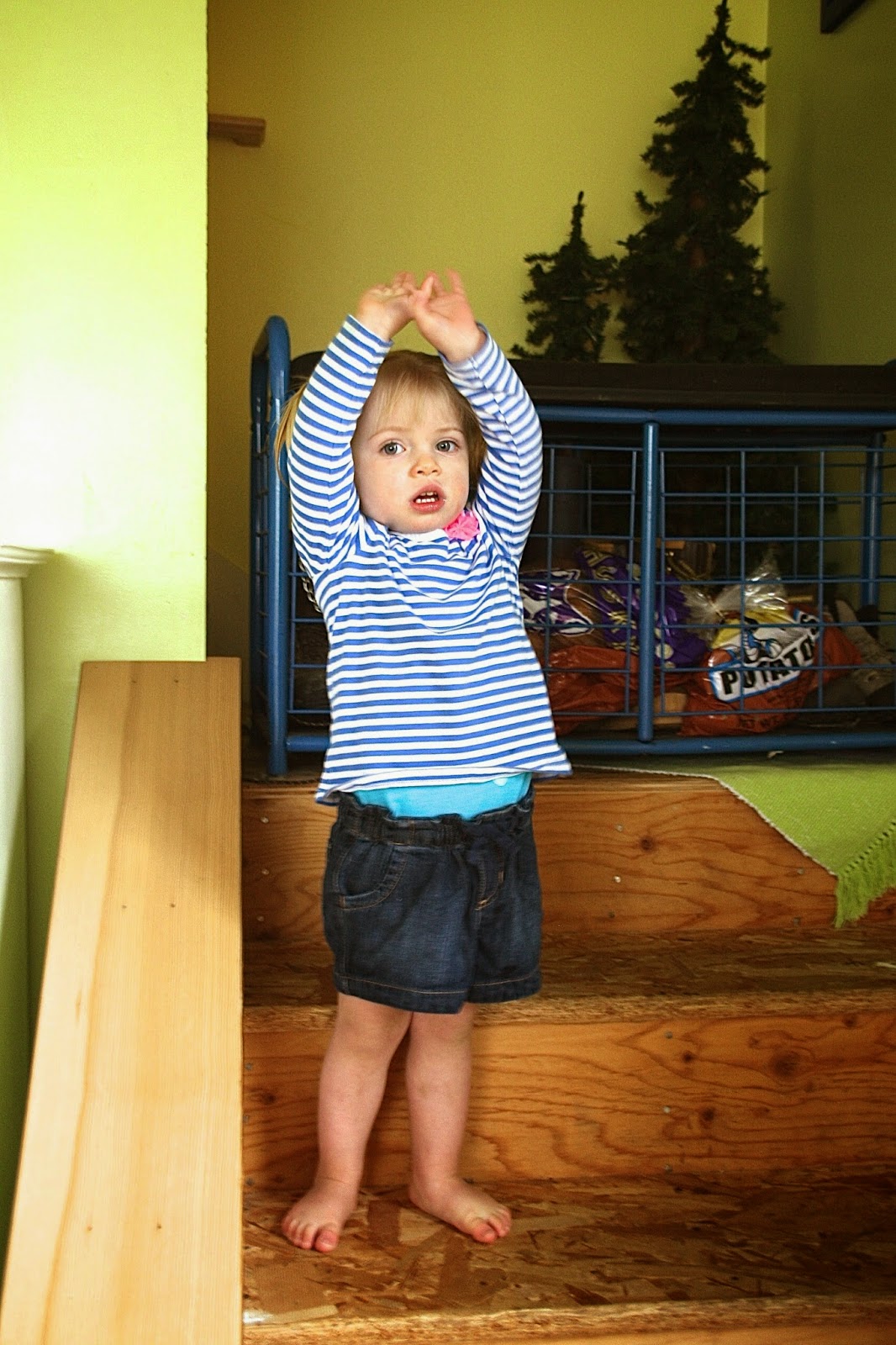 Took her to church with us on Sunday, where she is always warmly welcomed.
In fact, she kind of remembered her visit a month ago.

That time, it was Pastor Bert's birthday and we all had cake.
The cake was decorated with butterflies, one of which was probably plastic and ended up clipped to his lapel.  Pastor Bert is very friendly - gentle and kind with the kids, but I'm sure he can appear intimidating.  He's a big guy, with a big voice.  Naomi was intrigued by him, but kind of scared.  The butterfly broke the ice.

So when she saw him this time she looked long and hard and said, "Buh-fly".
Butterfly.
Yep.  She remembered him.

Funny thing, though... there's always a couple moments of "greet your neighbor" early in the church service, and lots of visiting afterwards.  That's my best guess for why my brother emailed me, laughing, and wondering why on earth his own daughter grabbed his hand and said,

Yah.  It was a fun weekend. 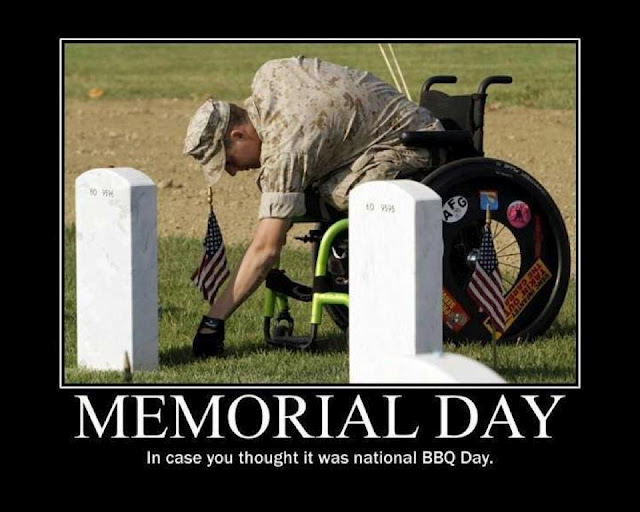 ... we DID have a family BBQ,
but Wyatt, Tate, and Gunnar spent the whole day
(in pouring rain for most of the day, no less)
volunteering at the nearby
Festival of Flags.

It's amazing.
1600 flags line the cemetery.
And not just any flags.
Those are flags given to deceased veterans' next of kin,
on behalf of the President,
in honor of the veteran's service.
1600 of them.

Tate was pretty glad to get to chat with local veteran Joe Moser. 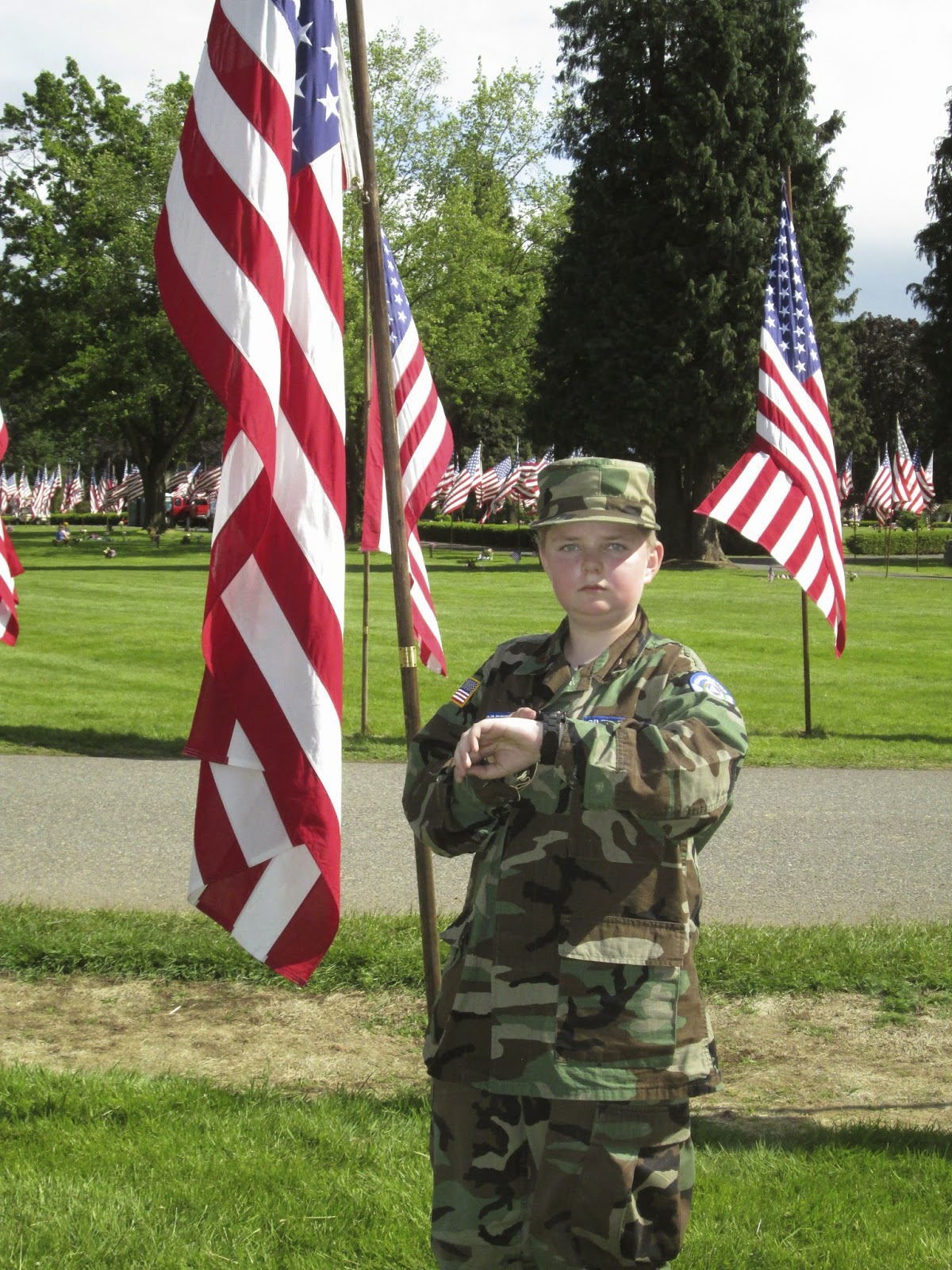 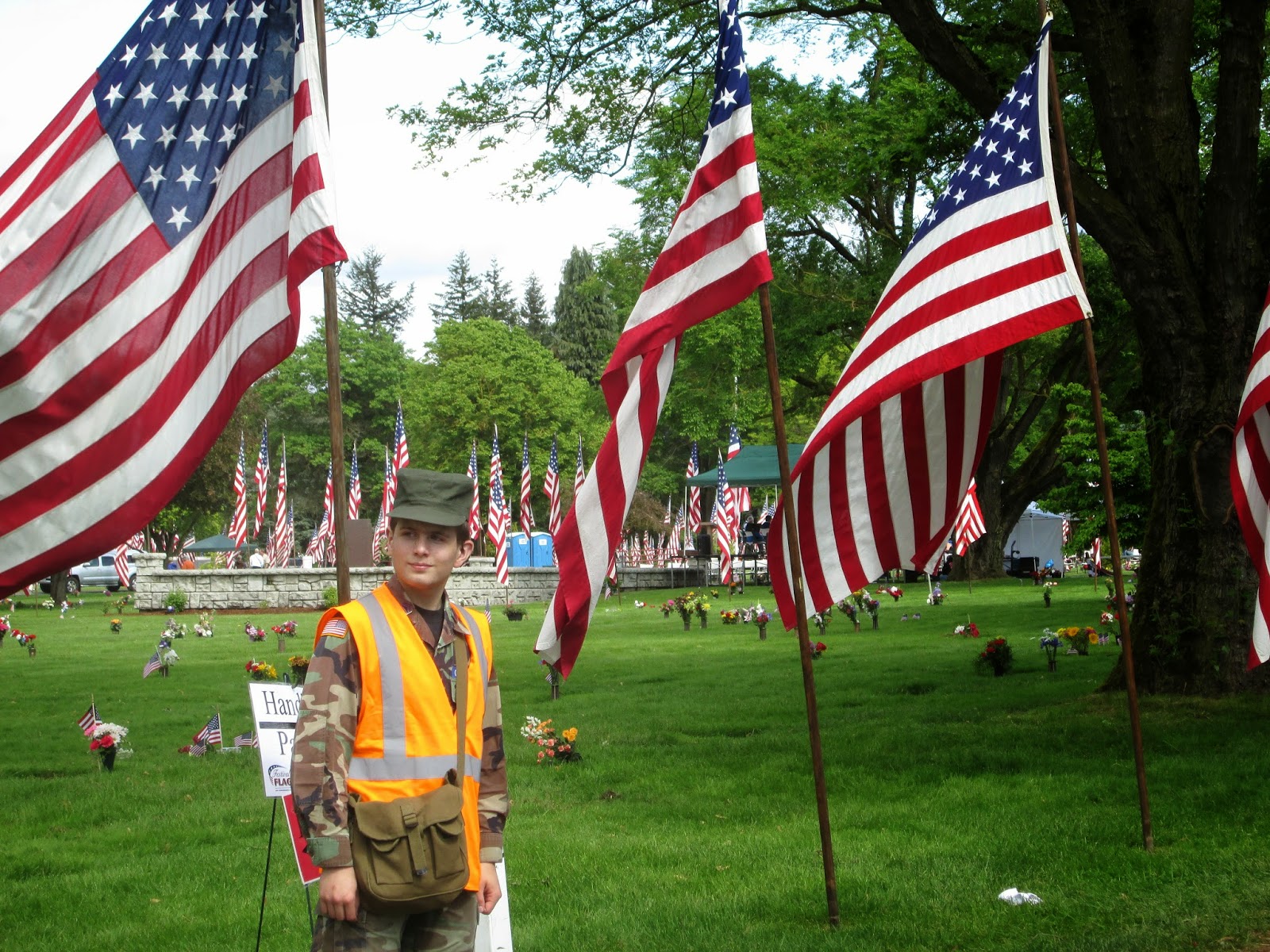 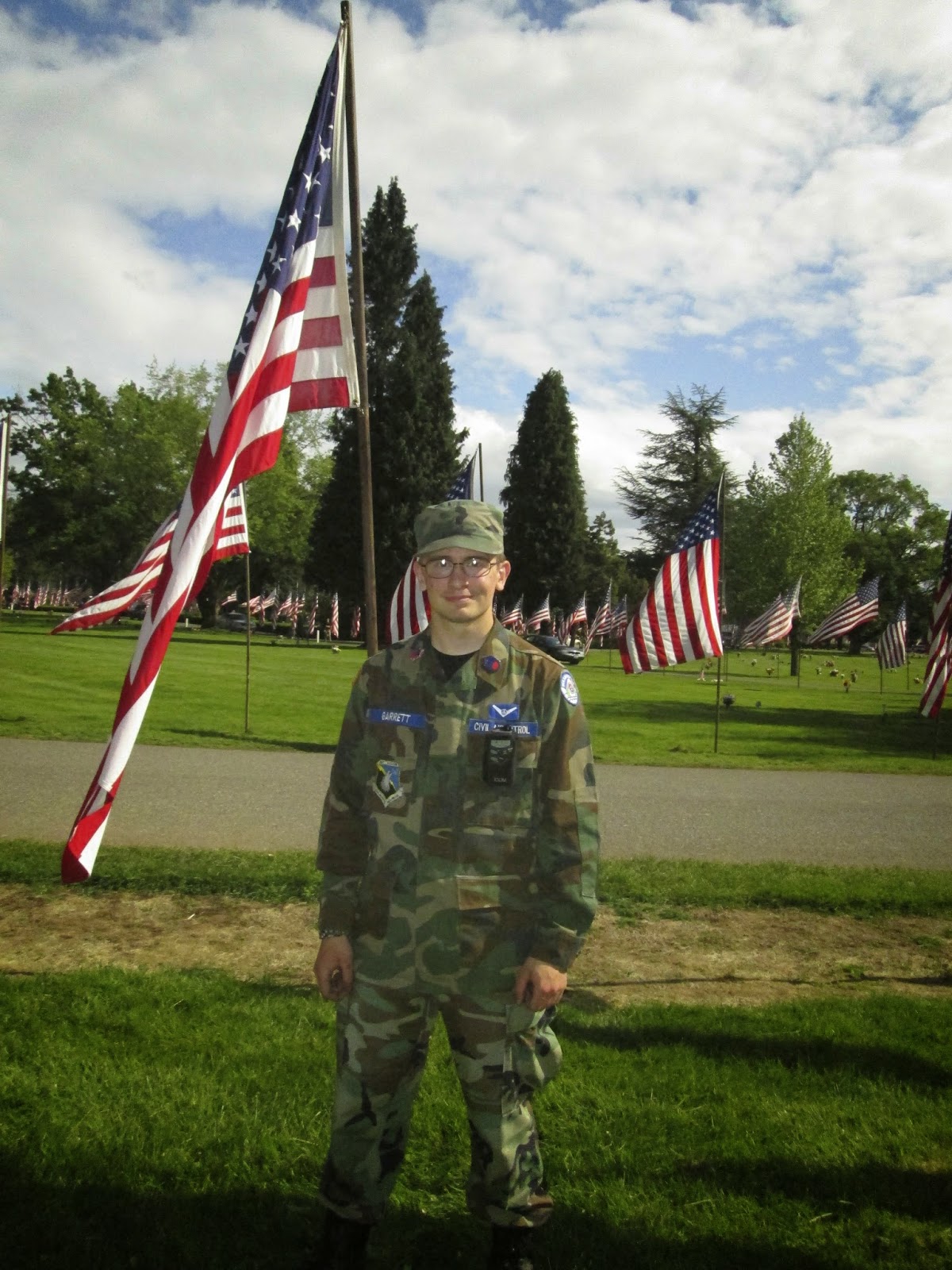 And, followed it up that evening by watching
The Monuments Men.
Posted by Herding Grasshoppers at 10:19 PM

Great post! I love hearing about Naomi! She is such a pistol!
Proud of those boys. They are very well rounded men! Great Memorial day picture too!
Too many people consider it the kick off to summer...NOT!!
Hope your week is going well!

Naomi is such a doll! I love that she has a different relationship with each of your boys!

Thanks for sharing your weekend!