1.  I'm apparently 47-going-on-90, because I couldn't wait to get to bed last night at about 8pm.  Could have something to do with the three insane raccoons fighting under my window the night before.  And let me tell you that is not a pleasant sound.

2.  Of course, Tate and I were up and on the road by about 6am to beat the Seattle morning traffic. Grandma Grasshopper accompanied us to Seattle Childrens for hoop-to-jump-through: number one towards Tate's second implant!  I don't mean to minimize the important work those folks do, but this appointment... well... it was just to confirm things we all already know.

They have to make sure that Tate knows what he's getting into - the pros and cons (amazing improvement in access to sound, yet loss of residual 'natural' hearing), the risks (minimal), the commitment to follow-up appointments and therapy (huge, I estimated we put over 2000 miles of driving into these appointments).  Since we just did this two years ago, he remembers pretty well.  Check.

They also want to make sure that it's his decision and we're not coercing him.  Check.

And they have to document, yet again (for insurance purposes), that his hearing really sucks.  Check. 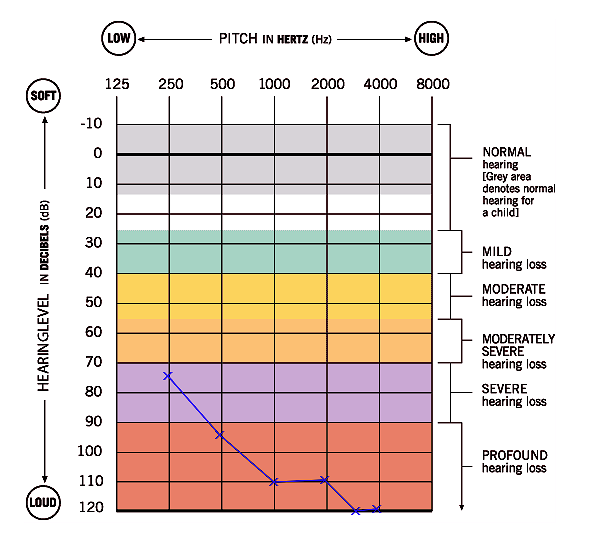 If you're interested, this is what his current (unaided, right ear) audiogram looks like.  First, it's showing you that he can hear a few low frequency sounds if they're pretty loud - 75 to 95 decibels.  That's a range that most people find painful.  Medium frequency sounds have to be even louder.  And the high frequency sounds are completely gone.

Compare what he hears with this chart: 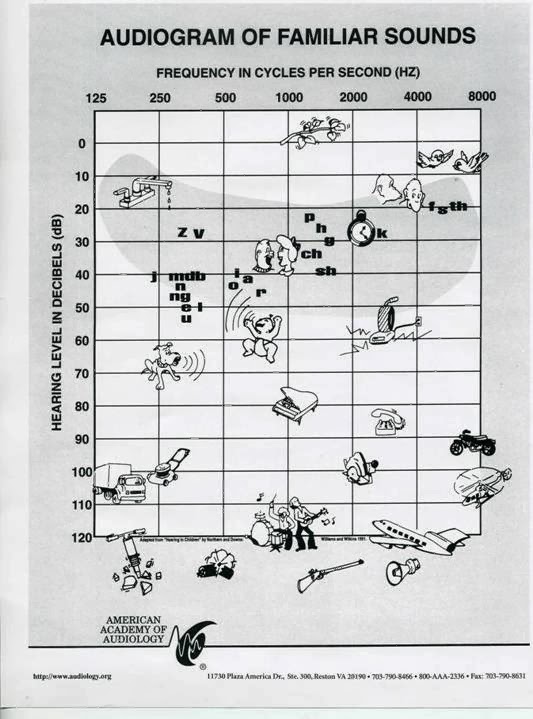 He might hear a truck or lawn mower, the rock concert, a jack hammer, or a gun going off, but that's about it.  He probably wouldn't hear the helicopter or a jet engine, because the frequency is too high.  Sure his HA will amplify the other sounds, but they become so distorted that it's not really helpful.  And even when they're amplified, he's only getting the speech sounds on the left side of the chart - none of the sounds to the right of the two talking heads in the center.

He's been without his HA for a couple of weeks (just picked it up yesterday from being repaired), which confirmed what we thought.  He told me that he depends on his CI for hearing things and understanding speech, but without the HA he can't tell where anything is coming from.  All the HA is doing for him is helping him localize sound.  Which is useful, but imagine if that's all your hearing did for you.

While that's kind of depressing (and it's a fine HA), it really makes the decision clear, and for that we're thankful. And look at this!  At the top of the photo below you can see the processor he currently has (on the left), the size of the average HA on the right (I think his is a bit bigger), and the new processors he'll get in the center - so much slimmer!  And look at all the colors! 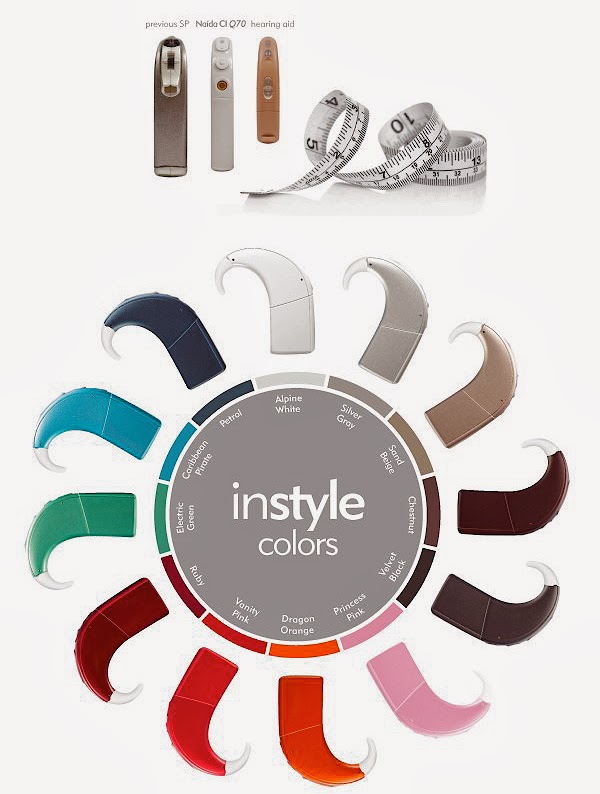 I know which one I'd pick - the Caribbean blue!  But I think he's leaning toward the one next to it called Petrol - nearly black with a drop of metallic blue.  Or he'll get black.  Whatever.  He's not embarrassed by his ear gear, but he's moved past the age where he wants neon green ear molds and bright blue HAs.

So excited for him... more about that all later.  We don't have a surgery date yet.

Will he have "normal" hearing?  No.  But what he gets is awesome, and he does amazingly well with what he gets.

Will he be able to lead an ordinary life?  No.  Good grief!  Why would we settle for ordinary?!  Tate is aiming much higher than that!

3.  I'm very thankful to have a "normal" day today - no trips, no errands, no appointments.  Maybe we can just get through our school work in the normal way.

Checking... one boy working on his language lesson, and... 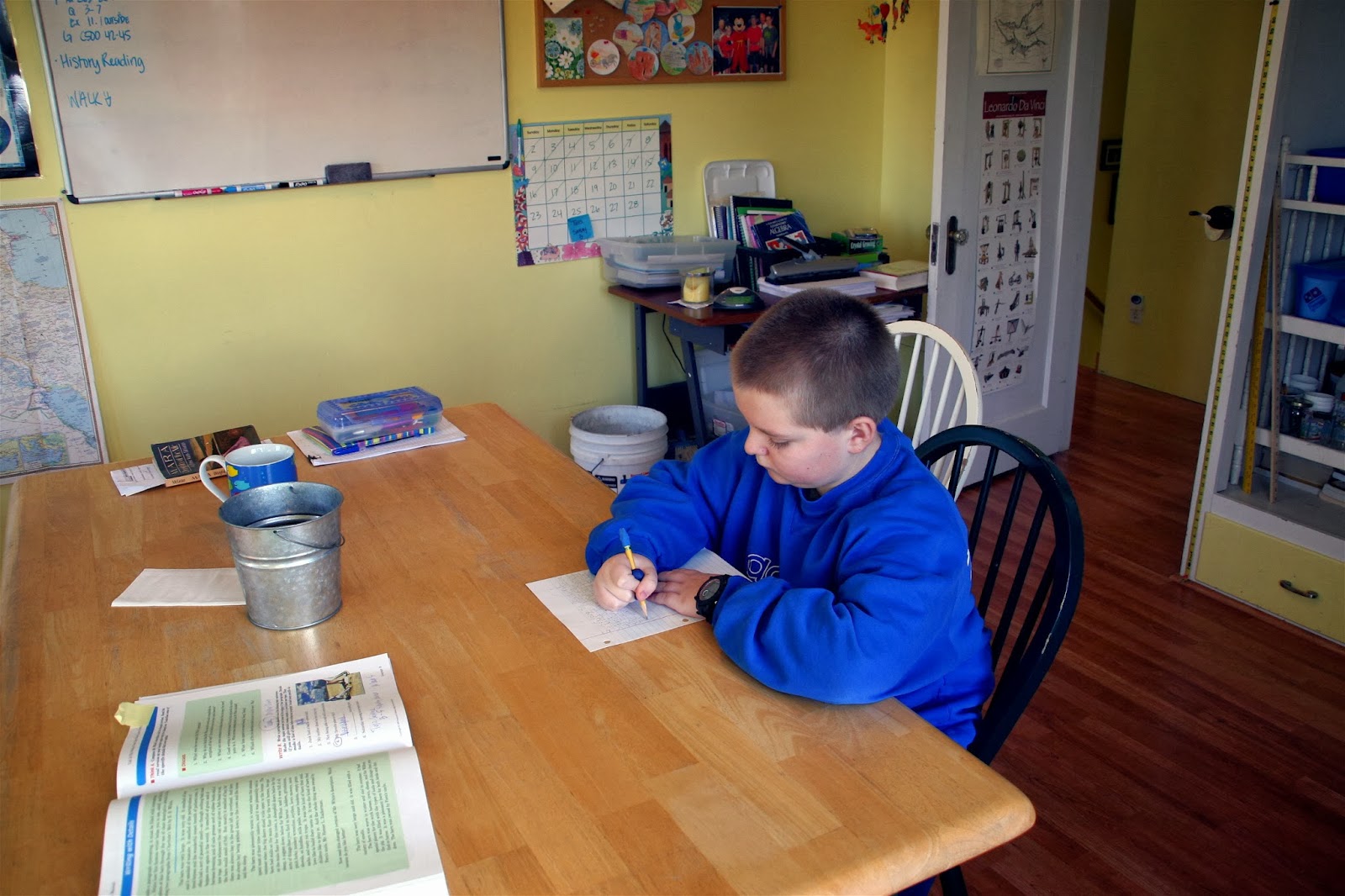 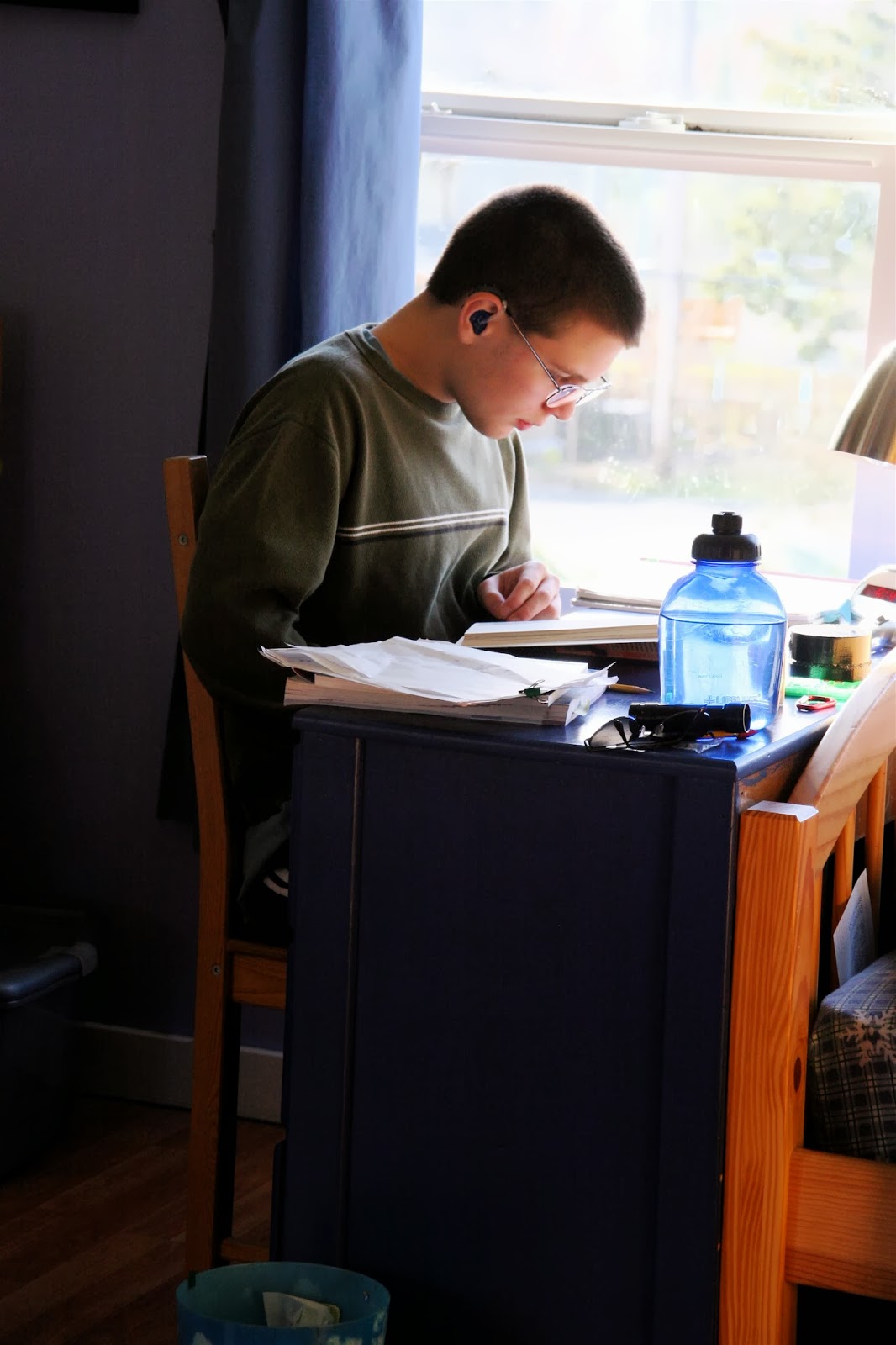 And the third boy left them this... 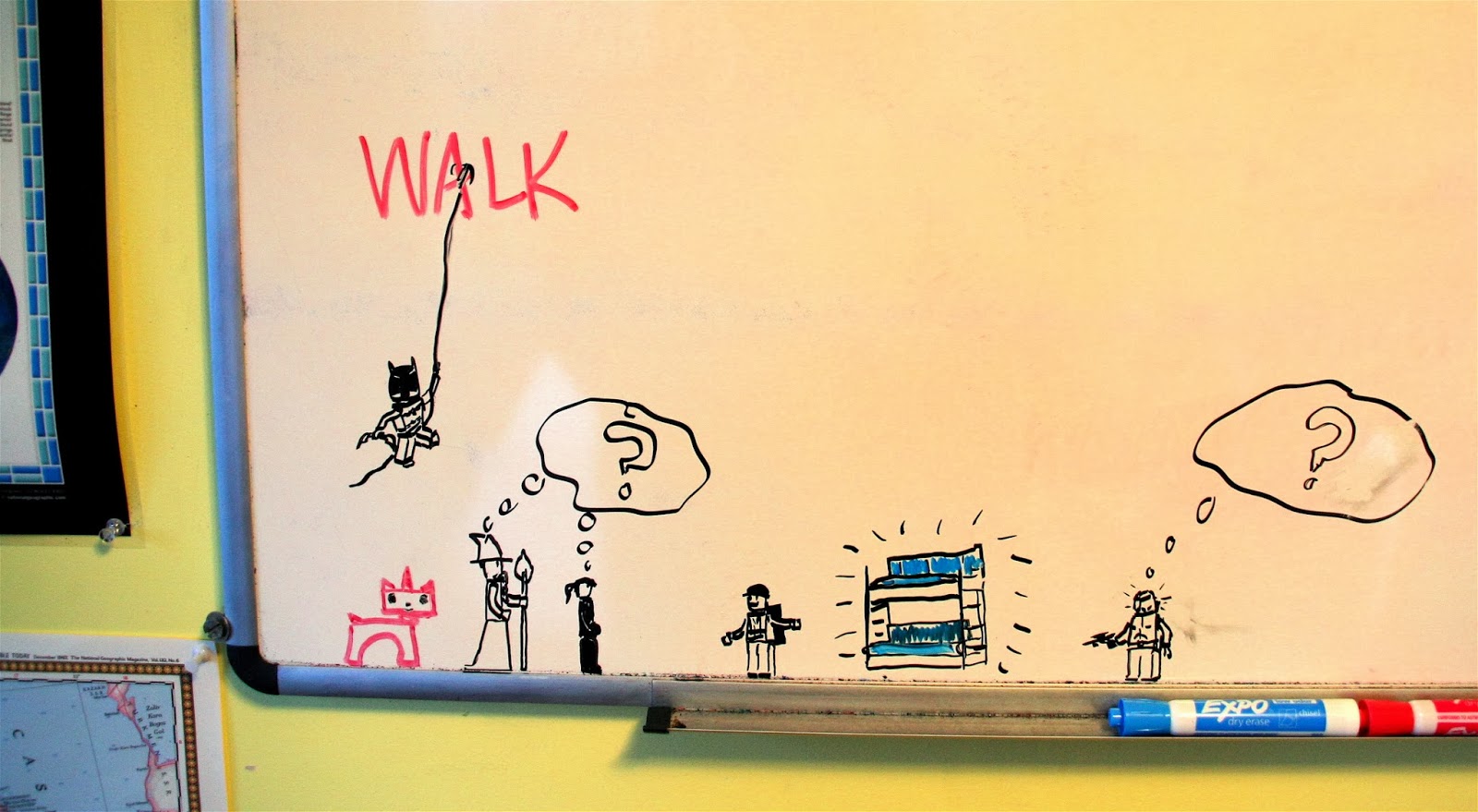 ... which has to do with the LEGO movie they've recently seen.  Double decker couch, anyone?

I took this photo a few days ago.  See the big white house, lower right, between the power lines? 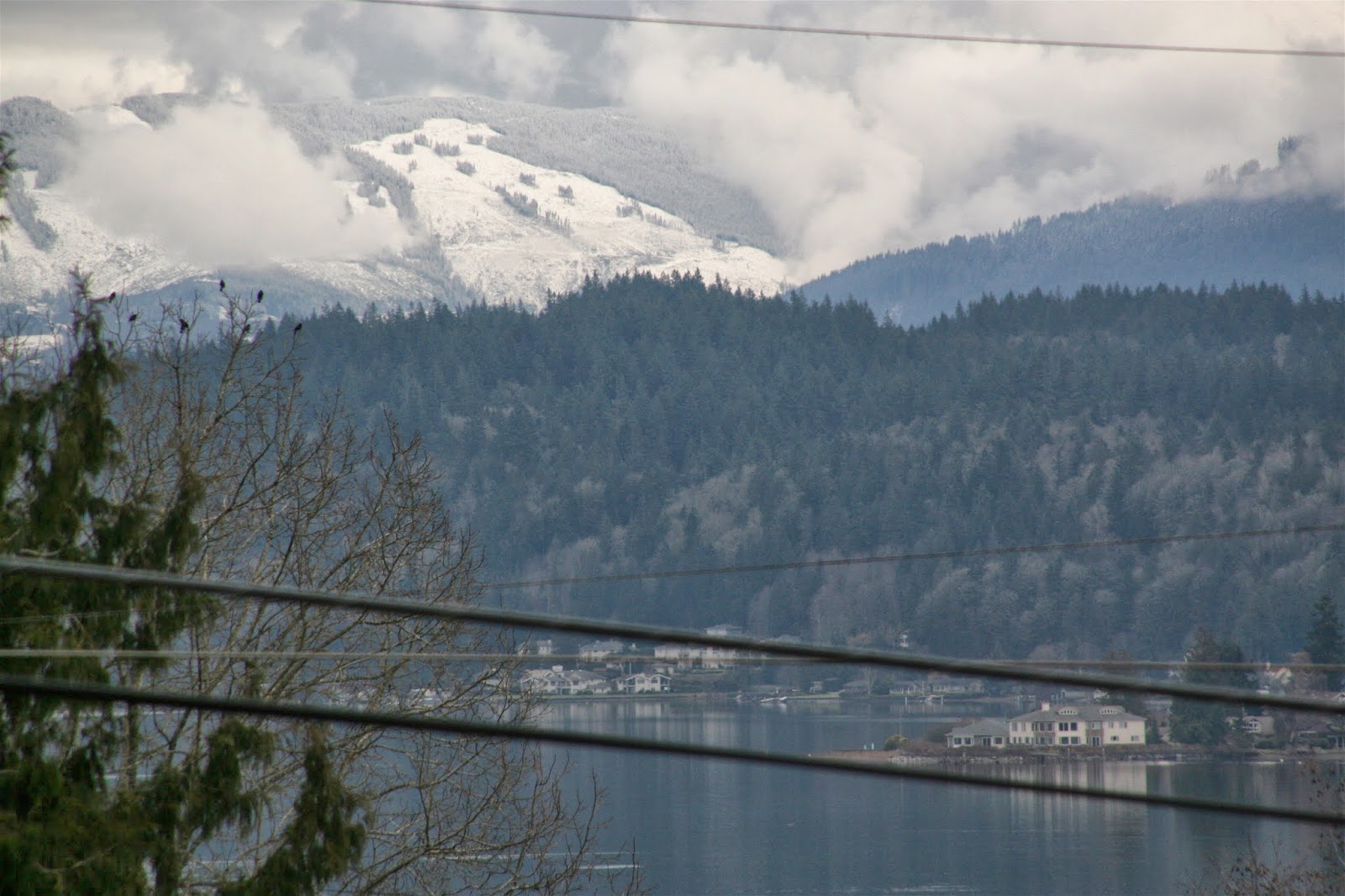 That has got to be one of the most amazing pieces of property on the lake, and they built... a big, boring, white box.

The owners came to Kerry a few years ago when they bought the land to talk about the house they wanted to build, but he didn't get the job.

What a snafu that was...  Kerry's office is in our garage and is not conducive to meeting with clients so he'll usually arrange to meet them at a coffee shop or at the job site, but once in awhile he'll invite clients to the house, as he did that time.  For whatever reason (maybe not much notice?) things weren't as tidy as I would've liked. The clients are from a different culture, and the fact that the meeting was in a house probably created some expectations in them that weren't met.  (The boys and I stayed upstairs out of the way, as we usually would, rather than acting like hosts and offering refreshments.)  And after they left we noticed that the bathroom not only wasn't exactly spic and span, but the toilet paper had run out.  *cringe*  So, yah, he didn't get the job.

Turned out to be a good thing, after all.  In the first place, that house... I mean, all those feathers and it still can't fly.  They had the property and the resources to do something amazing, and they built an over-sized spec house.  Further, word got around that the professionals they hired had a lot of trouble getting paid.  Who needs that?

So I look out the window and see that house, and I remind myself that sometimes it's a blessing not to get a job.

5.  Meanwhile, I look out the school room window and see this... 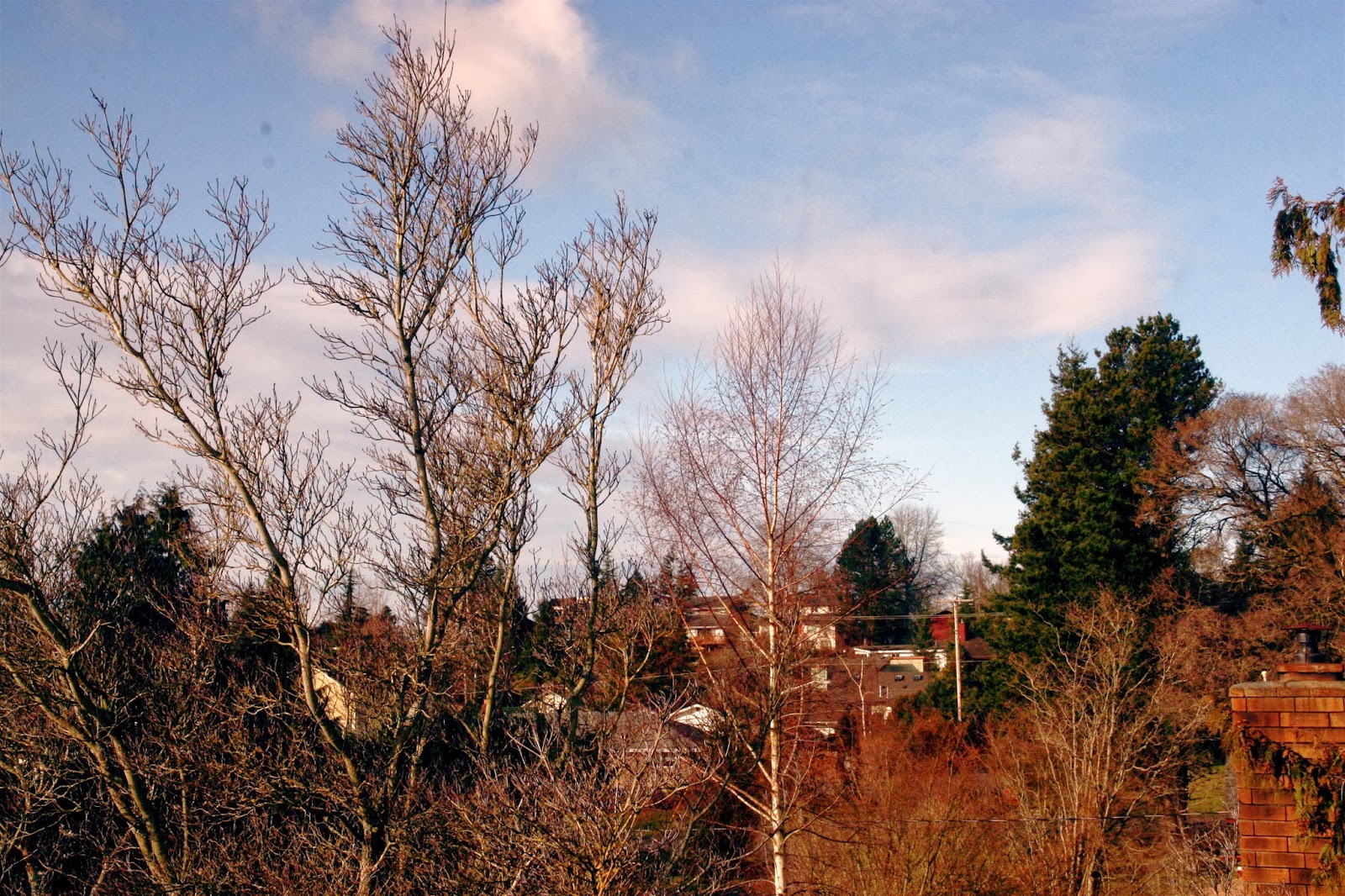 ... which looks like a lovely day is coming.  But I look out the other window and see this... 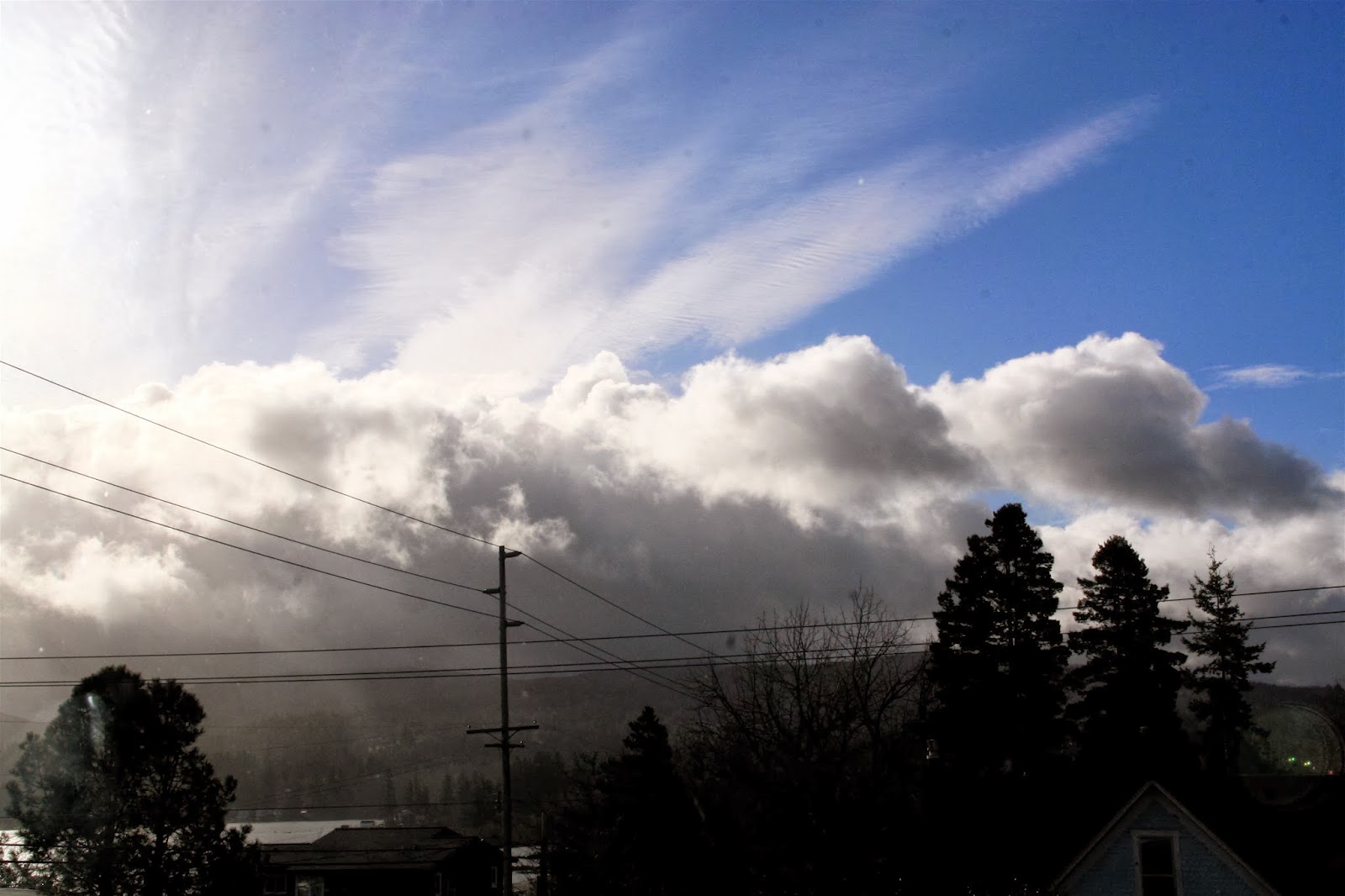 .. which tells me that Gunnar and I had better get a move on and go for our walk before we're underneath all of what's coming up the lake. 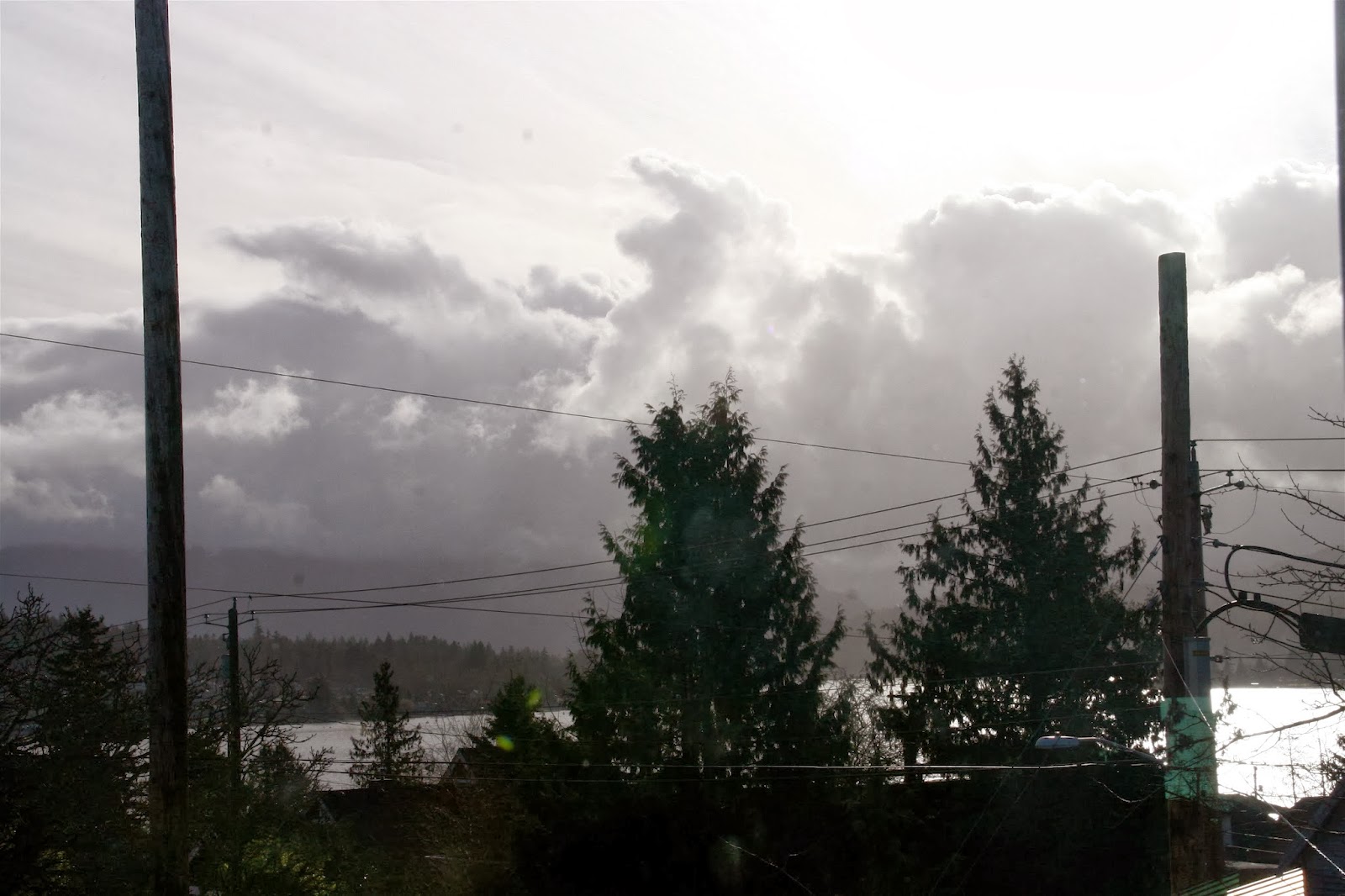 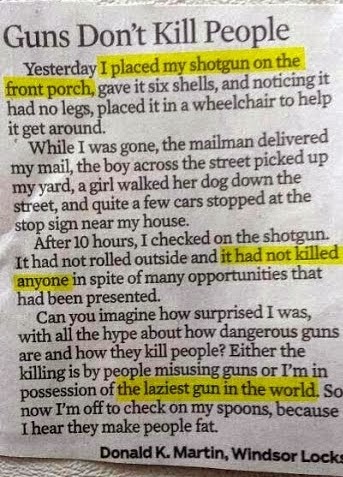 7.   I may actually have quite a chunk of free time coming up!  And by "quite a bit" I mean, a few hours.  The boys are visiting Whidbey NAS on Friday with a few CAP friends (I may have mentioned it earlier - it got rescheduled) - they'll get to see some of the base and get to try out the P-3 Orion flight simulators, thanks to a friend of ours.  Then Saturday they have a "training day", also with CAP.  What will I do with all that time?!  (Probably gather tax info... bubble officially burst.)

8.   Tate and I got home from Seattle in time to overlap with Gunnar's babysitting job, not that he needs my help.  Sammy's mom is really good to Gunnar, and shows her appreciation in very generous ways.  She and Sammy brought him this Valentine treat, which he graciously shared with his brothers. 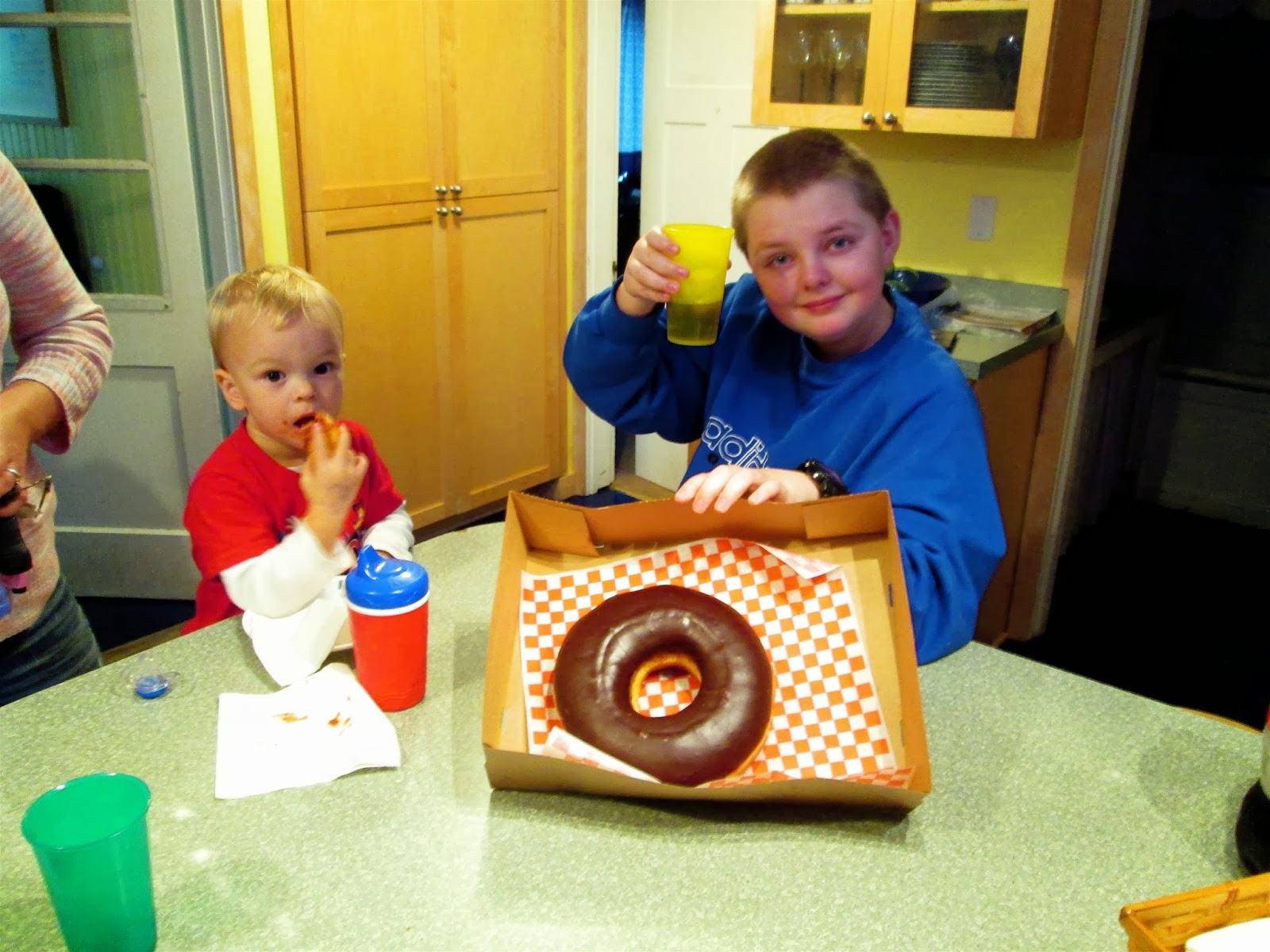 And how's your week unfolding?
Posted by Herding Grasshoppers at 11:34 AM

Is that a GIANT DOUGHNUT???? Now I know where I want to visit for sure!!!

"Will he be able to lead an ordinary life? No. Good grief! Why would we settle for ordinary?! Tate is aiming much higher than that!"

Now THAT'S-A-DONUT! Very fun for Gunnar to be rewarded for his good care of Sammy.

I too love the quote about Tate's bright future!

Oh, and the dangers of both guns and spoons ;D

I knew it. I knew my spoons were making me fat. Especially when they get into the ice cream.

Whoa! That's a big donut! Thankful to read that things are nicely on track for Tate. I too love your quote! Who needs normal!? :o)

Now thats MY kind of doughnut! Gunnar must have a wonderful time watching Sammy

So excited for Tate! Thanks for keeping us up to date on his progress.