As If The Fires Weren't Bad Enough... 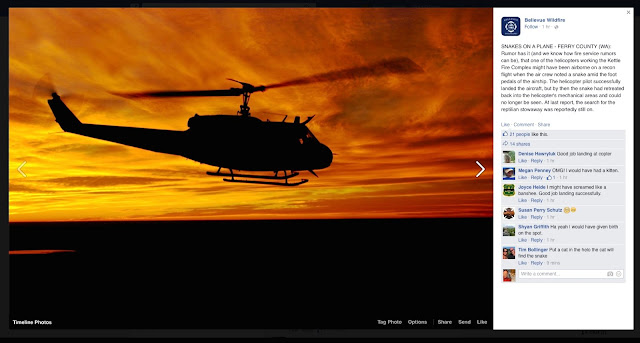 In case you can't read the caption, (too small?) it says:


Rumor has it (and we know how fire service rumors can be), that one of the helicopters working the Kettle Fire Complex might have been airborne on a recon flight when the aircrew noted a snake amid the foot pedals of the airship.  The helicopter pilot successfully landed the aircraft, but by then the snake had retreated back into the helicopter's mechanical areas and could no longer be seen.  At last report, the search for the reptilian stowaway was reportedly still on.

And then there's this:


That was a big one.

The good news is, we got some rain last night and more is forecast for the next few days.  That helps us in the western half of the state and up on the western slopes of the Cascades (the Goodell and Upper Skagit fires), but who knows how much rain will get over the mountains to the really big fires. Probably not enough.  Praying.
Posted by Herding Grasshoppers at 1:19 PM

How encouraging and I know about dental work. Had my teeth out 3 years ago. Local dentist said $10k for all the teeth and dentures. Found that Tuft's Dental in Boston would do it for $2k but meant traveling down for appointments through the winter months. God kept us safe and supplied the $ and everything went very well. It was an encouragement to hear you can get the dental work done and that God supplied your need. Thank you for sharing!