Our church had a children's Christmas program last night, and it was just exactly right. 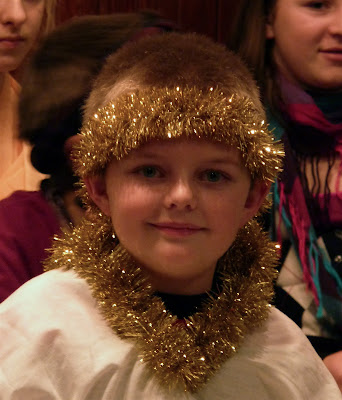 Gunnar, waiting to say his lines.
Not perfect... oh no, not perfect.  It had all the usual imperfections.  Kids that weren't quite sure when to enter or exit, a little angel that appeared to want to remove her costume, someone saying his line too soon and being loudly SHUSHED by another little boy, and the requisite preschooler picking his nose, in the front row.

But it was just right.

The story is familiar.  We could say the words by heart, from the first and second chapter of Luke. 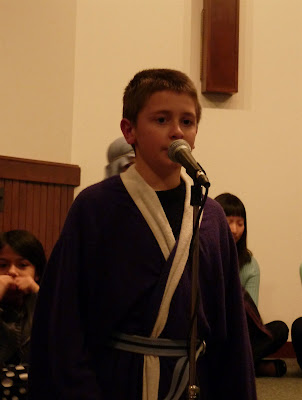 In the typical fashion of our little church, there was no "overcooked ham" in this show.  No auditions or weeks of lengthy rehearsals.  The kids brought home their verses after Thanksgiving, had two Sunday mornings to practice, were costumed in bathrobes and tinsel, and nobody got stressed out about it.  All the kids participated, from preschool to high school - about 40.  They sang carols, and in case they didn't remember all the words, two of the college students - brothers - manned the overhead, projecting the words on the back wall of the chapel. 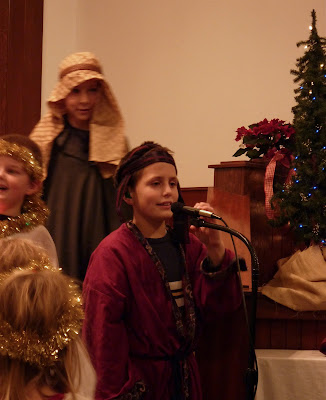 Tate, "Glory to God in the highest!"

If there was any possible ham in the show, it was Gunnar.  He informed me before the program that he got to be the "lead angel", signified by more tinsel on his costume.  I think he was chosen for this because the other angels were all very shy little girls.  But he had another secret...

As someone recited, "An angel of the Lord appeared to them, and the glory of the Lord shone around them...." 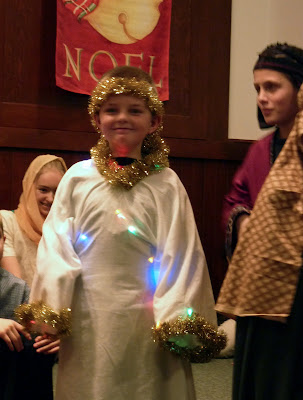 Gunnar, in all his glowing glory!
... he flicked the switch.

Cutest angel I ever saw! But better not share that with Gunnar. What boy wants to be "cute"? Merry Christmas, and Happy Birthday to our wonderful Savior!

That is awesome! He is one cute angel!

Grandpa and Gramma Grasshopper were/are SO PROUD of 'their' shepherds and ILLUMINATED angel! It was a wonderful program. Always love being included.

Hey, now. Kai ~ one of those other angels ~ wouldn't take too kindly to being referred to as a shy little girl. ;-D

You are such a positive person, Julie; I admire and appreciate that characteristic. It's good for me to hear you describe the program as just perfect in light of the fact that I find it so painful. I do recall finding it perfect way back when. Maybe I need to skip a year. But like you, I'm glad we don't go in for an extravagent production. It is what it is. : )

Oh, I loved the program and I might add, I always do!!!! It is just refreshing to see each child doing their part to make it special for all of us. We all like to be a part of something special, and this gives everyone a opportunity to have their own moment!!!! Simple child like faith! Merry Christmas and have a great day. PB&j

We watched the video last night and I realized that Gunnar wasn't the only boy angel... sorry about that :0)