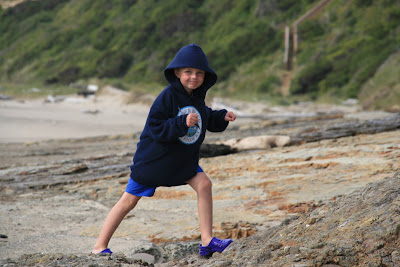 Gunnar lost a shoe today. One of his favorite purple "holeys".

That's what my kids call them. "Holey", not "holy" - as in, lots of holes, not sanctified.

Besides, they're not real "Crocs". Good heavens, like I'm going to spring for name-brand shoes when my kids might just up and LOSE them!

But here's the part that boggles my mind:

And he was wearing them. On. His. Feet.

Is that just a boy-thing, or what? I mean, we've all misplaced things. But, how do you lose something you're wearing and not notice it?

I sent his brothers back out to help him look. No luck. Gunnar said it might've fallen off while he was in a tree, and be lost in the tall grass around it. No luck. He said he had watched for it in the alley, coming home from our friends' house, in case it had fallen off on the way TO their house. No luck.

Gunnar is a smart child, an insightful child, a clever and quick-witted child. And he had absolutely no idea if he had walked to or from the neighbors' house with ONE shoe on his feet or TWO. Really.

Now, me... I feel kinda funny if I'm walking around in only one shoe.

So I called my friend and asked if her kids had seen a little purple holey around their yard. They had noticed him leaving with just one shoe, and found the other shoe...
in a pot.

Well, the last time I checked, shoes don't climb into pots by themselves, but it's all mysterious to my little boy. The same little boy that had an incident with a purple marker...

Posted by Herding Grasshoppers at 10:06 PM

it's a boy thing...er...guy thing! I had a favorite pair of orange canvas-type pants I used for rock climbing with Courtney that I just loved. One day I was on a rock wearing my orange pants and two weeks later I couldn't find them. I searched and searched and there was not a hint of them to be found anyplace. To this day the mystery of the orange pants has become a joke to friends and family. I finally succumed to trying to replace a year or so ago but they just aren't the same.

Gee, Jeff, I've never seen your orange pants, but... hmmm... are you sure this one wasn't a WIFE thing? LOL!